Accessibility links
Los Angeles Church Welcomes Dogs When a Los Angeles pastor decided his church needed a boost in membership, he did a little soul-searching and decided man's best friend should be part of the fold. Now, his Sunday service at Covenant Presbyterian Church is attracting new parishioners — and their faithful pooches. 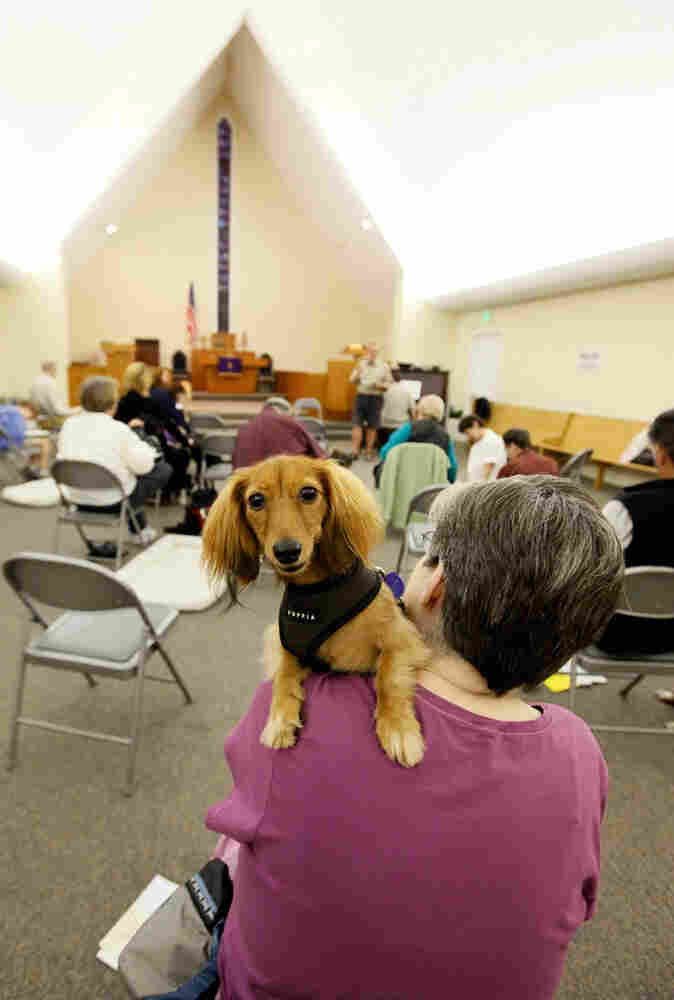 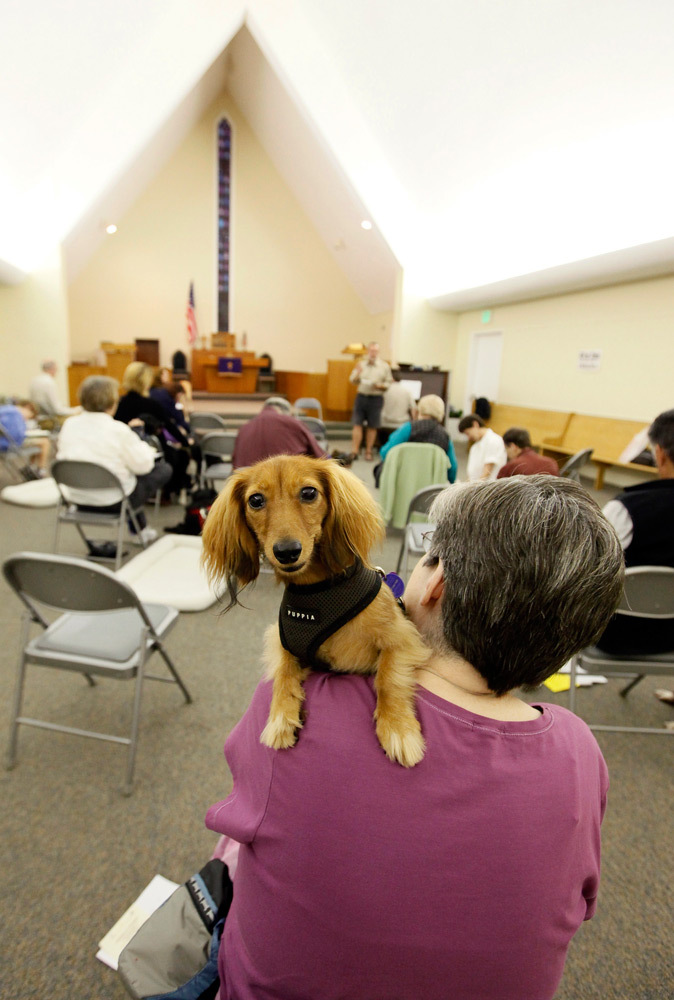 Donna Merz and her dog, Gracie, attend services at Covenant Presbyterian Church in Los Angeles on a recent Sunday.

When a Los Angeles pastor decided his church needed a boost in membership, he did a little soul-searching and decided man's best friend should be part of the fold.

Now, his Sunday service at Covenant Presbyterian Church is attracting new parishioners — and their faithful pooches.

On a recent Sunday, you can see that most of those arriving are not regular churchgoers. For one thing, it takes them a while to get settled in their seats

"Good boy! Sit!" Emma Sczesniak says to her dogs, Marley and Midnight, both on leashes. Midnight is a black, fluffy dog who towers over Marley, who may have some terrier in him.

Another parishioner, Vicky Rambow, is tethered to Sadie and Mac. Both dogs are low to the ground. Rambow guesses they're corgi and ... something. She says a church service that welcomes dogs is just what she was looking for.

"I'll come as long as they do it," she says, adding that she doesn't regularly attend church — but "this has caused me to come back."

Sadie and Mac tangle their leashes on their way into the small chapel located next to the church's main sanctuary. A few of the parishioners are in pews, but most are in folding chairs next to doggie beds of various sizes.

The music begins, and the congregation is getting a little rambunctious. Someone steps in the water dish, and a border collie wants to play with the poodle mix. It takes a few resounding commands of "Stay!" — and then it's time to pray.

"Thank you for all the gifts that you have given to us, including our four-footed friends," prays the Rev. Tom Eggebeen, the pastor of Covenant Presbyterian Church. 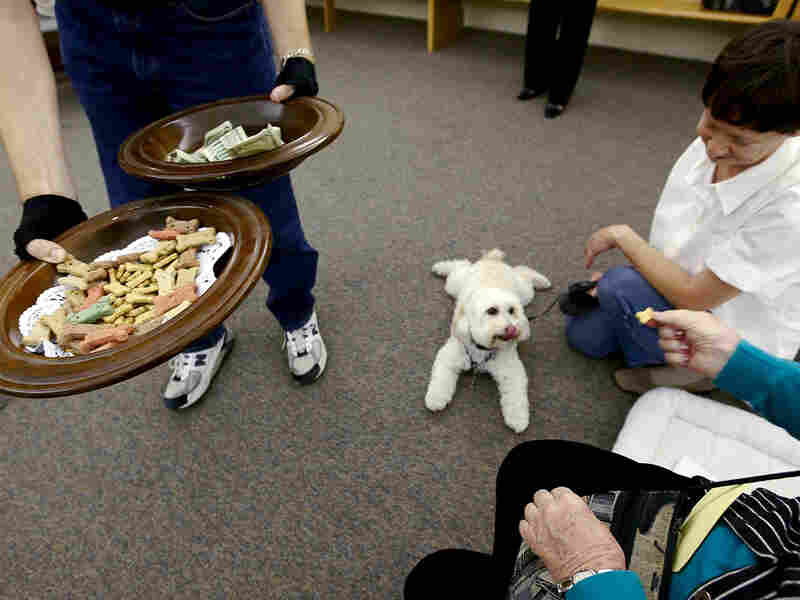 The collection plate and a plate of dog treats makes the rounds after the Sunday services at Covenant Presbyterian Church in Los Angeles. Richard Vogel/AP hide caption 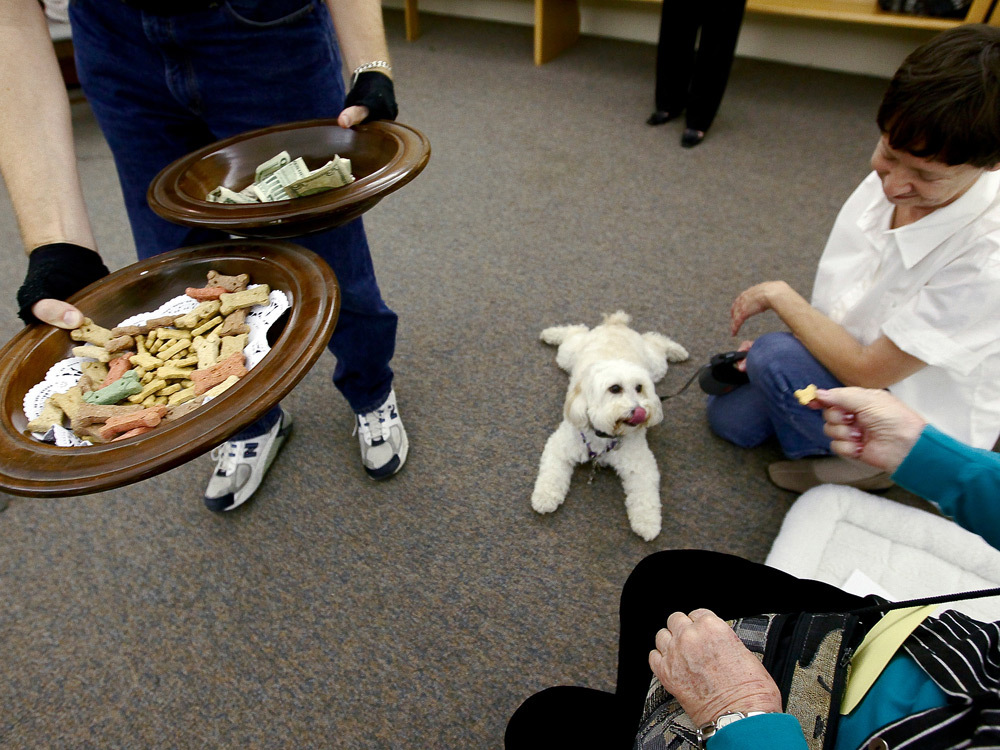 The collection plate and a plate of dog treats makes the rounds after the Sunday services at Covenant Presbyterian Church in Los Angeles.

Eggebeen says churches have been slow to recognize the deep bond people have with their pets.

"The question was raised by other people, you know, why dogs?" he says. "Not only are they important family members, but there's more to it than that. They belong to God, too, by gum."

Eggebeen, himself a dog lover, says another question he is often asked is whether he believes dogs have souls.

"When God created life, he blessed every dimension of it," he says. "So we share that with all the animals of the world."

Services like those offered at Covenant Presbyterian are part of a growing interest among people whose pets are central to their lives.

Laura Hobgood-Oster, a professor of religion at Southwestern University, conducted a survey that found more than 500 churches nationwide conduct annual blessings of pets and animals.

"They very specifically said that in addition to showing that kind of creation care for more than just the human world, that they also were gearing these particular events towards growing their congregations," Hobgood says.

'As Much For The Dogs'

Meanwhile, the congregation at Covenant Presbyterian has settled in for the sermon. Some are lounging on the floor. Others are sitting politely on the laps of their owners. All eyes are on the pastor — and they certainly appear to be all ears.

Eggebeen's sermon is punctuated — often at just the right moment — with barking.

When Eggebeen says, "The word 'dominion' — one of the words related in our English language would be what? Anybody want to hazard a guess?" a dog is the first to answer.

Joanna and Robert Barnes, who brought Charlie, a small dog with white, silky fur, say they appreciate the message of the sermon.

"It feels like it's as much for the dogs as it is for the owners," Joanna Barnes says.

They don't hand out hymnals at this service — with leashes to hold or a dog in your lap, it would be just too much. But the dogs do get biscuits.

And by the time the closing hymn is sung, the pit bull in the second row is curled up next to the schnauzer.