Accessibility links
In Sept. 11 Trial, Lots Of Evidence, But No Slam-Dunk Prosecutors have plenty of evidence to support allegations that Khalid Sheikh Mohammed masterminded the Sept. 11 attacks, including multiple confessions. But it won't be easy getting most of it into federal court. The accused terrorist most likely won't go free, but the trial could be a long, tough battle.

In Sept. 11 Trial, Lots Of Evidence, But No Slam-Dunk

In Sept. 11 Trial, Lots Of Evidence, But No Slam-Dunk 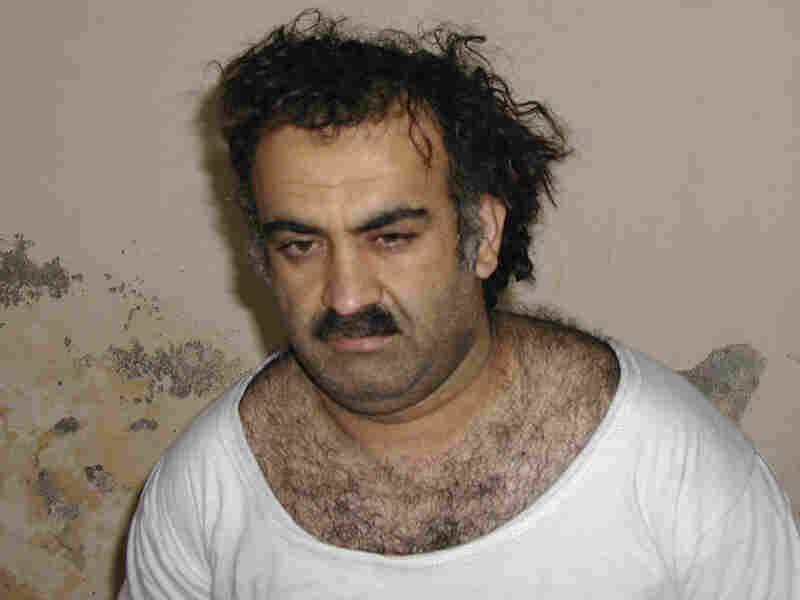 Khalid Sheikh Mohammed, the professed Sept. 11 mastermind, is seen shortly after his capture during a raid in Pakistan on March 1, 2003. AP hide caption 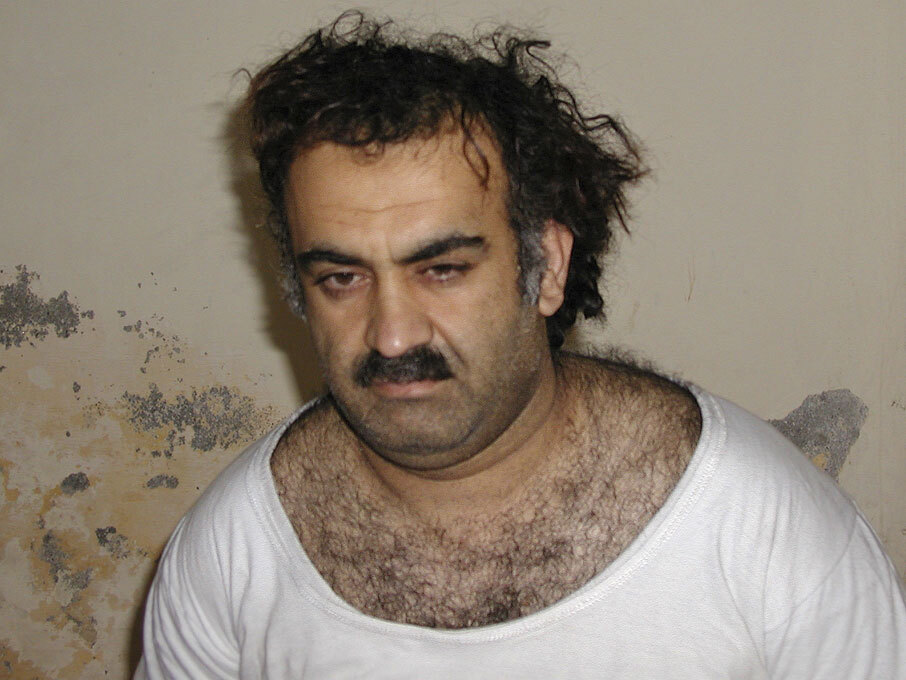 Khalid Sheikh Mohammed, the professed Sept. 11 mastermind, is seen shortly after his capture during a raid in Pakistan on March 1, 2003.

Khalid Sheikh Mohammed has admitted numerous times to being the mastermind behind the Sept. 11 attacks.

But when he eventually sets foot in a Manhattan federal courtroom, U.S. prosecutors will very likely still have to overcome a daunting set of obstacles to obtain a conviction.

The biggest complications, of course, stem from his lengthy detention and harsh interrogation sessions, which included 183 instances of waterboarding, a form of controlled drowning. The methods used — which many human-rights advocates have decried as torture — could possibly invalidate even voluntary confessions that came several years after those sessions.

Beyond the legal questions about coerced confessions, the U.S. government is entering uncharted legal waters after Attorney General Eric Holder decided to try Mohammed and four other accused terrorists in civilian court rather than controversial military commissions.

The good news is that there is other evidence that prosecutors should be able to use to tie Mohammed to al-Qaida.

Mohammed was first indicted in 1996 for his connections to terrorist plots. That suggests that more than a decade ago, the United States already had prepared a case to convict him of being part of a terrorist network.

"There is a high probability [Mohammed and his four alleged co-conspirators] will be convicted on the larger conspiracy," says Andrew McCarthy, who was the lead prosecutor in the 1993 World Trade Center bombing case and is now a senior fellow at the Foundation for Defense of Democracies. "What I think you'll find is if there are acquittals, there will be acquittals on particular counts relating to particular acts." 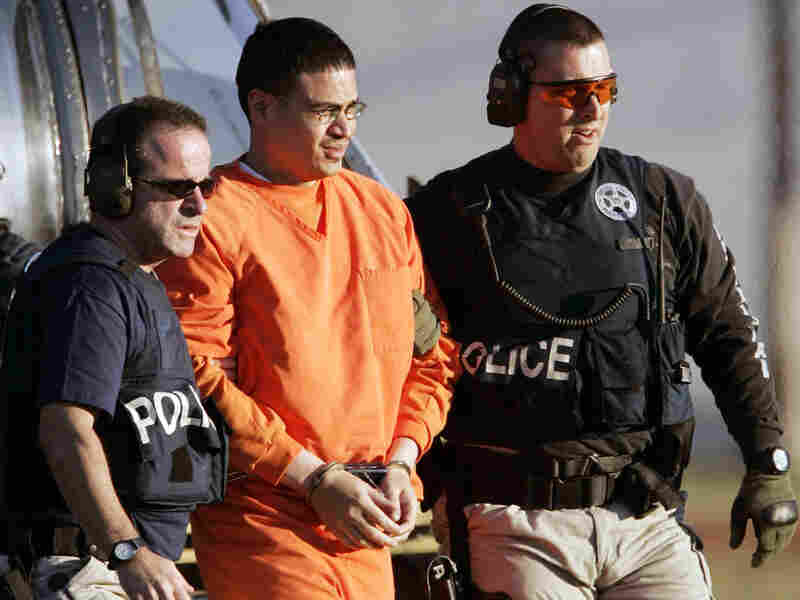 The Justice Department has not yet released its formal indictments for the civilian courts. But there will be intense political pressure to convict Mohammed, in particular, for his role in the Sept. 11 attacks.

Here, too, the U.S. government has some evidence that is untainted by torture allegations. For one thing, Mohammed and fellow detainee Ramzi Bin al-Shibh gave a 2002 interview to the Al-Jazeera satellite news network in which they bragged about the Sept. 11 attacks, or what they called the "Holy Tuesday" operation. "Yes, we did it," said Mohammed, who identified himself as the head of al-Qaida's military committee.

When Mohammed was captured in Pakistan in 2003, U.S. agents seized a hard drive with details about the four airplanes hijacked on Sept. 11, along with other data about the hijackers and even transcripts of a chat session with at least one of the hijackers, according to a U.S. government filing. The drive also contained three letters from Osama bin Laden.

There is a chance, however, that the hard drive and other evidence seized during his capture might not be admissible in court.

"Much of the evidence that may exist was obtained and then retained outside the rules of federal evidence," says Kevin Brock, a former FBI official who also served as deputy director of the National Counterterrorism Center. "That creates a significant challenge for the prosecution."

Many legal experts say the government should be able to get such evidence admitted, but the defense team could still challenge the credibility of any data on the hard drive, for example.

"Computer and e-mail data is so easily tampered with and changed, and it's so hard to prove it hasn't been," says Michael Scharf, a war crimes and national security law expert at Case Western Reserve University School of Law. "Even if it isn't excluded, there will be an argument about reliability."

Another swath of evidence collected by U.S. intelligence agencies, including intercepted phone calls and e-mails, remains highly classified. There are provisions in federal court to allow the use of top-secret evidence, but the rules could end up limiting how much prosecutors will want to use.

"In civilian court, the presumption is that if classified info is relevant, the accused gets access to it," says Gregory McNeal, a professor at Penn State Law who specializes in national security law.

Relying too heavily on classified intelligence could allow Mohammed and the four other accused men to use the trial as a way of exposing details about their treatment, as well as sources and methods used by spy agencies.

The Trouble With Mohammed's Noncoerced Admissions

One way around that problem might be to use the testimony of other detainees, as well as that of al-Qaida figures who have already been convicted. Possible witnesses include shoe bomber Richard Reid and convicted al-Qaida figure Zacarias Moussaoui, both of whom allegedly reported to Mohammed.

Much of the evidence that may exist was obtained and then retained outside the rules of federal evidence. That creates a significant challenge for the prosecution.

Indeed, prosecutors used the summary of a voluntary statement from Mohammed in Moussaoui's trial. In it, Mohammed admitted to being in charge of the Sept 11 operation.

Mohammed has offered plenty of other admissions as well. In a 2007 hearing on his status at Guantanamo Bay, Mohammed was very clear about his role, according to a partially redacted U.S. military transcript. With Mohammed listening and interjecting with minor corrections, his representative in the hearing read a signed statement that Mohammed said he made "without duress."

"I was responsible for the 9/11 Operation, from A to Z," he said in the statement, going on to claim a role in more than two dozen other plots, including personally beheading American journalist Daniel Pearl in Pakistan and planning the deadly bombing of a nightclub in Bali in 2002.

In March of 2009, Mohammed and the four other detainees filed a document with the U.S. military commission, over the objection of their attorneys, in which they claimed the Sept. 11 attack as their own. "We are terrorists to the bone," they wrote.

But it is unclear whether prosecutors will be able to use any of these admissions in court, because they all came after his coercive interrogations.

"There is no way — after someone has been waterboarded 183 times — that several months later, they're still not influenced by that experience," says Scharf. "I don't think they're even going to try to rely on that evidence."

FBI agents also conducted separate interviews with Mohammed to try to establish a legal record of voluntary statements. But the suspected terrorist was never read his Miranda rights, because the U.S. government was planning to try him in a military commission.

"It will be pretty tough to admit any of those statements," says McNeal. "You can't shake off the fact that custody is coercive."

Could The Case Get Tossed Out? Not Likely

Some experts like former FBI official Brock say there is even a chance that the entire case might not make it to trial.

"I have seen judges dismiss normal federal cases for governmental behavior that they considered to be outrageous," says Brock. "This is certainly anything but a normal case, yet it's not difficult to imagine a federal judge looking at a set of defendants the government has had in custody for several years, who were physically and psychologically compelled to give information, and where a considerable amount of the body of evidence against them was handled outside the federal rules of evidence — it's not hard for me to imagine that judge deciding this is a case that can't be brought to trial."

There are some legal precedents for judges to throw out cases if they believe the government's actions have irrevocably tarnished the proceeding.

But legal experts say a dismissal is unlikely given the gravity of the charges, not to mention the fact that the trial is being held only blocks away from the site where the World Trade Center once stood.

In addition, the precedents for dismissals have related to the conduct of law enforcement authorities. It is unclear whether judges would extend their concern to harsh interrogations carried out by intelligence operatives.

"There are always some risks and uncertainties in taking a case to trial," says Matthew Waxman, an expert in national security law at Columbia Law School. "That said, the risks that any judge would throw this case out are extremely, extremely small, and the Obama administration has signaled that in that event, it would probably continue to detain him pursuant to war powers, anyway."

A Public Stage For Mohammed

Assuming the trial goes ahead, it is going to be a lengthy process. Pretrial motions, including reviewing classified evidence, could take one or two years alone. The trial itself could last for months.

There is a chance that Mohammed could choose to plead guilty. But even then, there would almost certainly be a protracted hearing over a possible death sentence.

Either way, terrorism experts warn that Mohammed has been eager to get some sort of public forum so that he can use it for his own propaganda purposes.

Cameras will not be allowed in the courtroom, but any trial would be attended by reporters, and transcripts would be made public.

"Naturally, he is fully aware of the fact that this case does have global potential, and he will want to make a political pronouncement," says Rohan Gunaratna, an expert on al-Qaida and head of the International Center for Political Violence and Terrorism Research in Singapore. "I believe he will use the U.S. justice system to communicate to the Muslim masses as his final message that the fight should continue."

"I'm not scared of what Khalid Sheikh Mohammed has to say at trial," Holder said. "And no one else needs to be afraid, either. I have every confidence that the nation and the world will see him for the coward that he is."