Accessibility links
Longhorn Cattle Are Prized By The Inch Texas longhorns have made a comeback. The animals, once nearly extinct, now number more than 330,000 in herds across the country. Tip to tip, their horns can measure six feet and beyond. And every year, breeders gather in Fort Worth, Texas, to answer the question: Whose horns are longer?

Longhorns Through A Fisheye

Texas longhorns — the cattle, not the college football team — have made a stunning comeback.

In 1964, there were believed to be fewer than 1,500 genuine longhorns in existence. Today, there are more than 330,000 in private herds scattered across the country.

The animals have grown popular among weekend ranchers who want a symbol of Western heritage but don't want the work involved with regular cattle.

Every year, longhorn breeders come to the Will Rogers Coliseum in Fort Worth, Texas, to answer the question: Whose horns are longer?

At this year's horn competition, held last month, the stock pens are full of handsome creatures with widespread horns, their hides brown, white, red, orange and brindled. Under bright lights, cowboys pull them into chutes and hold a string along the length of their horns to get the measure.

"We sell 'em by the inch, not the pound," says Donny Taylor, a heavy-equipment operator for Union Pacific Railroad who raises longhorns on the side. He says buyers like them because they're easier to keep.

"Longhorns are cheaper to feed than regular cattle. They'll browse like a deer — they'll eat anything in the woods," Taylor says. "You want to keep your fence row clear? You want to clear property? Don't buy a goat. Buy a longhorn. They'll clean 'em up for you. The good Lord built 'em that way." 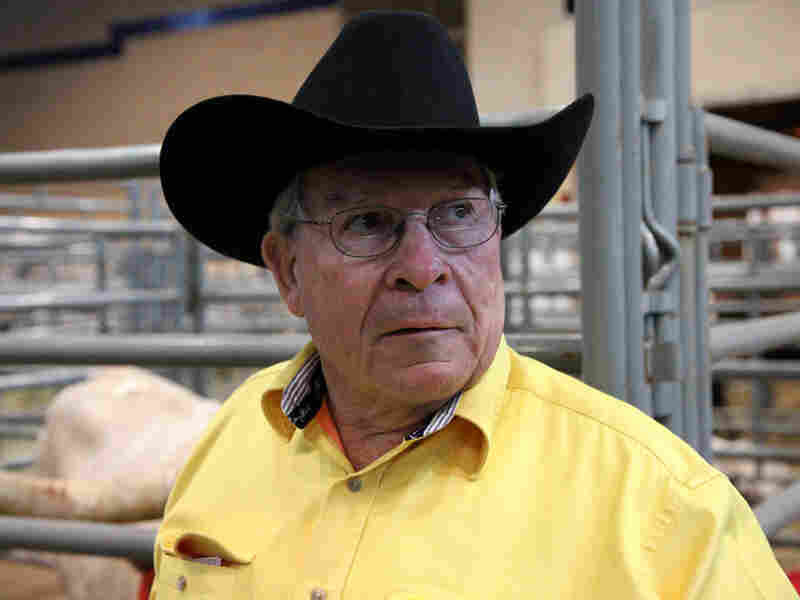 Doug Hunt breeds world-record longhorns at his ranch in St. George, Utah. He was a big winner at the Horn Showcase in Fort Worth, Texas, last month. Peter Robbins for NPR hide caption 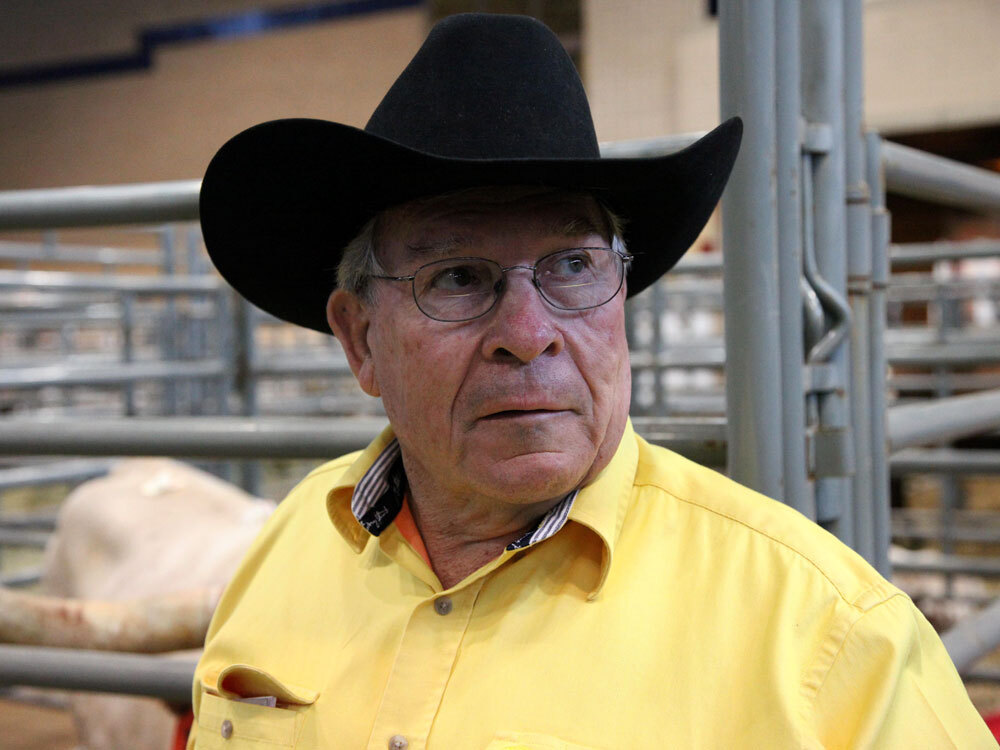 Doug Hunt breeds world-record longhorns at his ranch in St. George, Utah. He was a big winner at the Horn Showcase in Fort Worth, Texas, last month.

'Horns Is Where It's At'

One of the names heard over and over again at this year's contest is Doug Hunt; he has raised longhorns for 25 years at his ranch in St. George, Utah. Hunt is the owner of a bull called Hunt's Command Respect.

Prize beef cattle are coveted mainly for their beefiness. But at this competition, it's obvious that only one standard matters.

"Horns is where it's at," Hunt says. "I'm not in the beef business. I try to raise longhorns because that's where the money is."

Ranchers who raise beef cattle don't have a very high opinion of these people who raise animals solely for the length of their horns. But longhorn raisers like Mike Crawford don't seem to care. He owns an advertising and PR firm in Dallas and is a weekend rancher. He stands in a pen with a brick-red cow, her enormous horns lowered as she eats snacks from his hand.

"They may look intimidating," he says, stroking the cow's forehead. "This is Cherry Jubilee. Her horns measure 60 inches tip to tip. And she is so friendly."

Crawford says he likes to bring his clients to his Red Peak Ranch, near Brownwood, Texas.

"I bring out executives from the city, and we go out there and measure the horns. Truly, it's better than taking them out for a round of golf," Crawford says.

Time was, longhorns were anything but pets. They were wild Spanish cattle brought to the New World by none other than Christopher Columbus. They made their way from Santo Domingo to Mexico to Texas, where they adapted to the harsh Southwestern terrain and became the foundation of the American cattle industry.

The Southwestern writer J. Frank Dobie described them in his famous treatise, The Longhorns. He wrote: 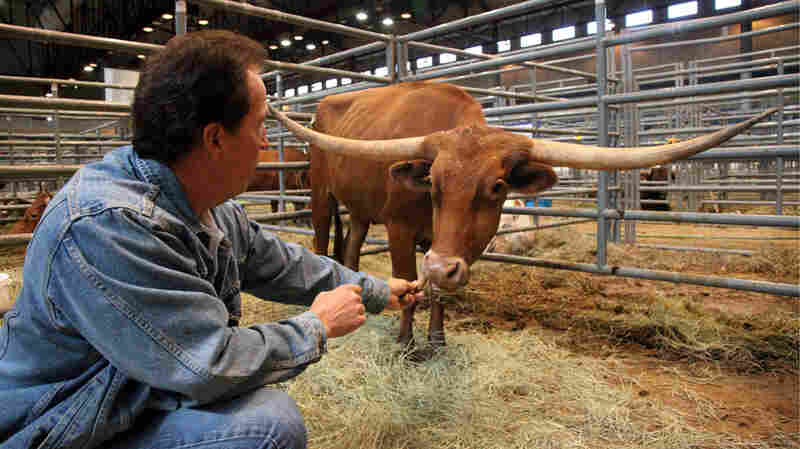 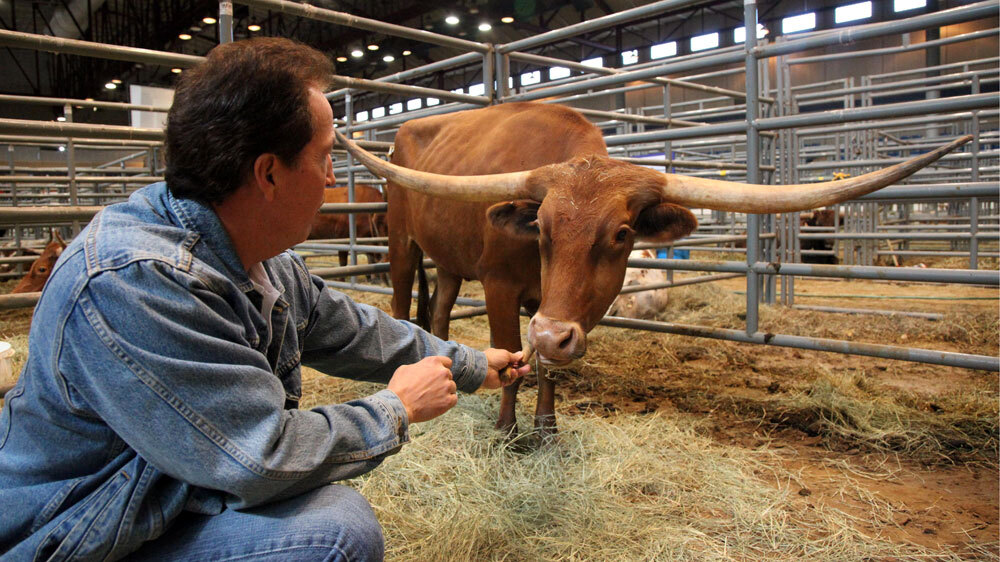 But I have an immense respect for the breed. They possessed an adamantine strength, an aboriginal vitality, a Spartan endurance, and a fierce nobility that somehow makes one associate them with Roman legions and Sioux warriors.

Fierce nobility, however, does not necessarily make for a good marbled rib-eye. Cattlemen seeking to improve the rangy, raw-boned longhorn began importing better-muscled European cattle in the 1880s.

Like the bison before it, the true Texas longhorn was headed to extinction. The federal government intervened in the 1920s and 1930s and created two protected herds: one in Oklahoma and one in Nebraska. They're still there.

The Texas Longhorn Breeders Association of America formed in 1964 to perpetuate the breed. Today, there are more than 330,000 longhorns, and they are in every state in the union. Nearly half of them are in Texas, where they've become a common sight in roadside pastures.

"It is amazing how many longhorns are just everywhere, so the breed is far from being extinct," says Bob Cropp, a longhorn authority who teaches beef-cattle management at Oklahoma State University.

He says the animal's startling comeback is being driven by urbanites moving to the country. They want to own a piece of frontier history and get an agricultural tax exemption by putting livestock on their property, which can save more than 50 percent on property taxes.

"They go and build 'em a ranch home, with a front porch and a rocking chair and Texas longhorns grazing in the front yard," Cropp says.

Every year, a few longhorn are slaughtered for their lean meat, and others are sold for rodeo stock. But mostly, the animals are ornamental.

He agrees that what he breeds and sells are, as some have called them, "yard art."

"That's right — it is art. I never dreamed when I started this that I would ever sell a heifer for $150,000. Pretty amazing," Bowman says.

Dobie, the Southwestern writer, wrote, "The Texas longhorn has made more history than any other breed of cattle the civilized world has ever known." Who could've predicted that this would be its latest chapter?

Argentine Cattle No Longer Just Home On The Range Sept. 14, 2009

In earlier versions of this story we said the prize bull Trail Dust was owned by Doug Hunt. That is incorrect. Trail Dust is owned by Joyce and Joshua Cashman. Hunt owns Trail Dust's father, a bull named Hunt's Command Respect.