Accessibility links
Potter's Wood-Fired Kiln Sparks Friendships Twice a year, potter Naysan McIlhargey and as many as 40 of his friends spend hours firing the plates, bowls, cups, pitchers and vases he makes. 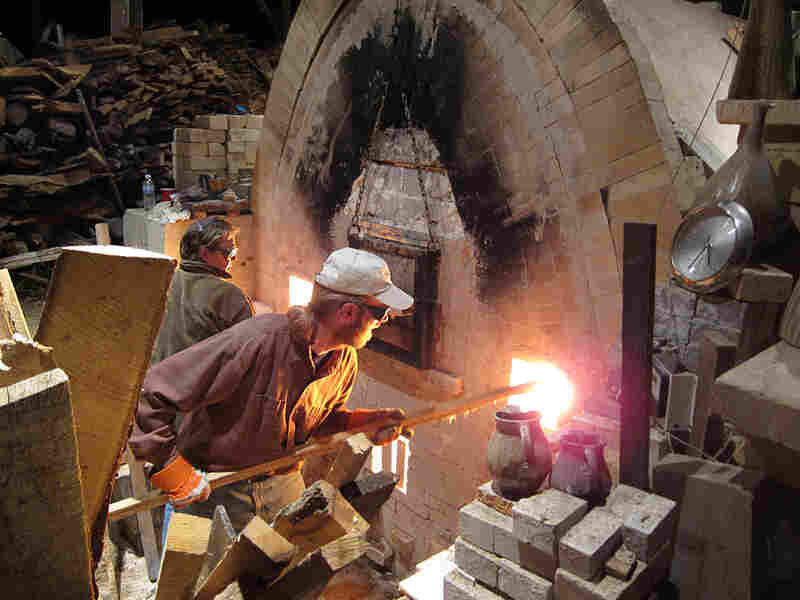 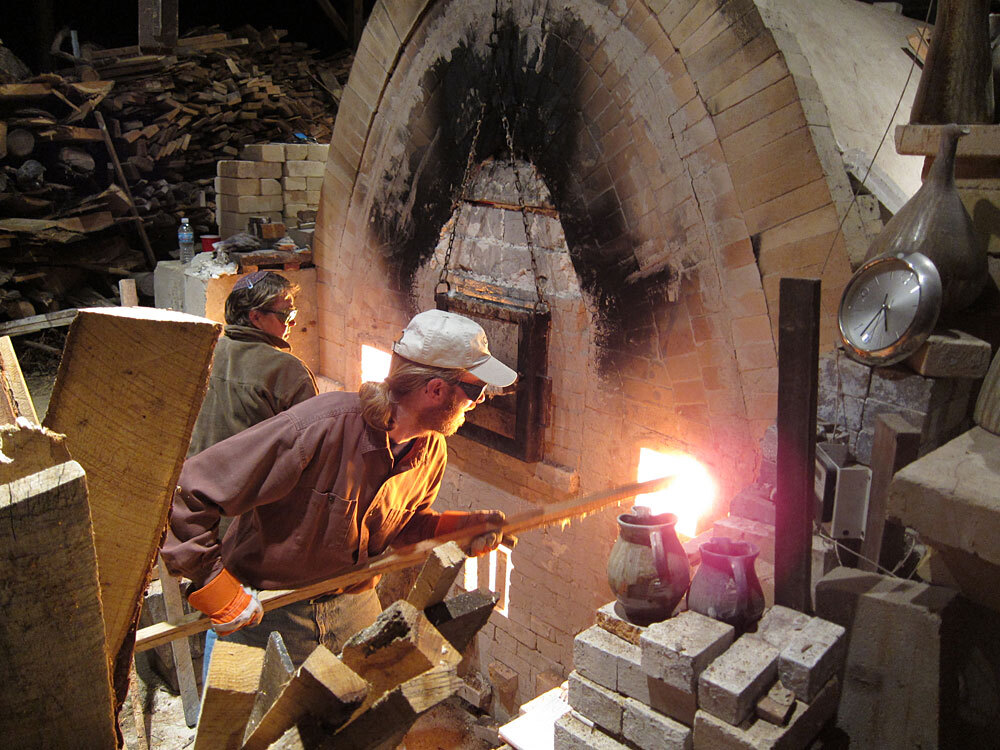 At most tables on Thanksgiving, the turkey draws all the admiring looks. But Naysan McIlhargey, owner of Miami Valley Pottery, wants diners' eyes to feast on the plates underneath the bird.

Earlier this month, McIlhargey and as many as 40 of his friends and neighbors spent 36 hours firing the plates, bowls, cups, pitchers and vases he makes twice a year at his pottery outside Yellow Springs, Ohio.

"Typically what we do is we leave the back sides unglazed so you can stack them on top of each other rim to rim," McIlhargey says. "And the flame travels through the plates, and each back and rim will look different depending on where it is in the kiln."

Soon, McIlhargey will find out if all the work he's done for the last six months is wasted. He has perhaps 2,000 pieces inside the 30-foot-long kiln. In the next few days he will hardly sleep from worrying about his pottery and about his friends who have come to help.

He starts with a small warming fire to dry out the kiln and build up ash on the pottery.

"It's just below 200 degrees. We keep it until tomorrow morning and then starting early in the morning I'll raise the temperature 100 degrees an hour," he explains. "We're preheating with apple trees and peach trees from the orchard that were cut down last year. I don't know the color of the ash; I don't know how it's going to be different from the cherry or the walnut or the pine that we typically use, but it could be interesting."

That's what makes a wood-fired potter do all this work: It could be interesting. McIlhargey could use gas, or load up an electric kiln and walk away for 36 hours. But you wouldn't see the glaze melting bright yellow from pine wood, or the darker swirls from cherry wood. The ash melts on the pots in patterns that no artist could create.

At sunrise the real burn starts and soon, the first shift of volunteers arrives.

"We come here, get dirty and sweaty, and have fun," says Rich Reth.

Reth drove five hours from South Bend, Ind. He had first visited the pottery as a customer, and then got interested in the twice annual wood-firings.

"We enjoy doing this work," he says. "My brother-in-law is with me here. Naysan's a good friend. We trade services. I help him with his burn, and he gives us a couple pieces of pottery. At home when you're having dinner and you're sharing with your family and you see this work of art that he created and that you helped with the finishing product, it makes it all worthwhile."

McIlhargey's crew of about 40 people includes two Ohio State University professors, an architect, a grant writer, a chiropractor, software engineers and a maintenance facilitator at a nunnery.

McIlhargey's wife, Jalana, likes to stoke the kiln, but as a midwife, she often has other deliveries to attend. 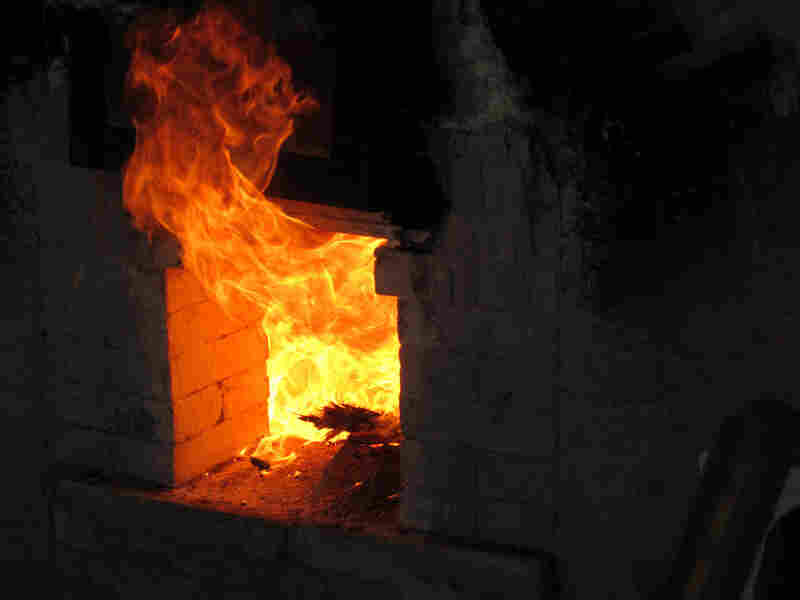 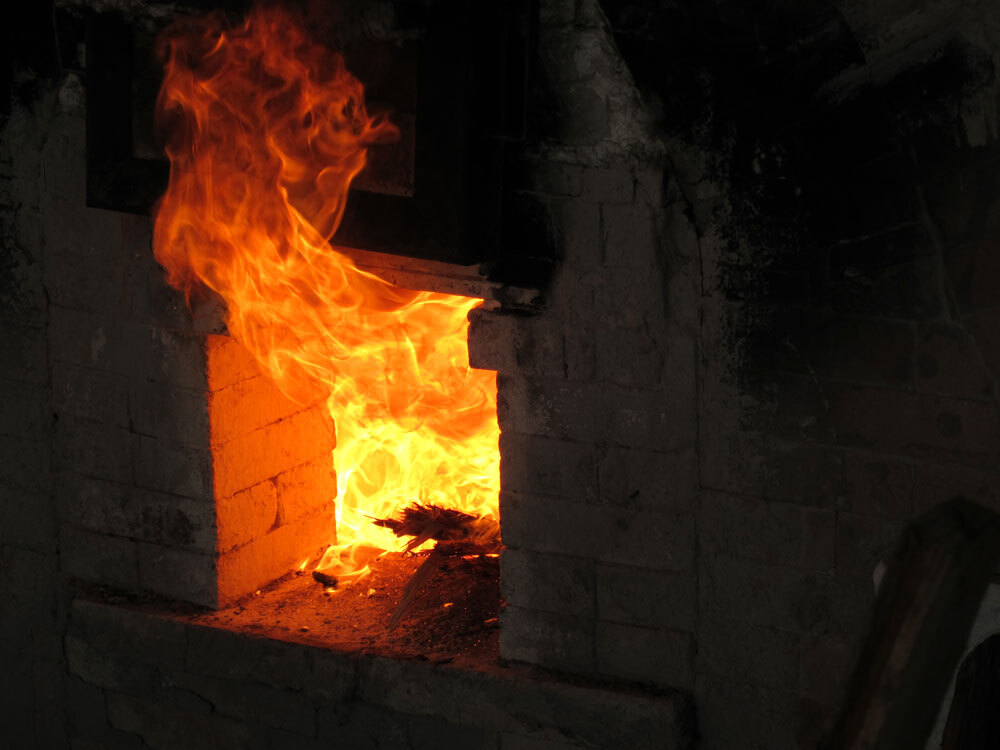 The wood-fired kiln roared through the night at Miami Valley Pottery in Ohio.

In Love With Fire

The evening of the first day is light work — and social — lots of food and kids. The wood goes in from the sides as well as the front of the kiln and the temperature inside climbs through the night. Just after 4 a.m., the temperature hits 2,160 degrees.

Nancy Parent, a schoolteacher who helps with the firing, prefers these hours before the birds start singing. It's better for listening to the fire.

"For me it starts in the mouth and as it moves, it sort of sucks in and breathes," she says about the fire. She imagines a form, lying on its back. "It's got this exhale and inhale kind of feel, and it's actually calming. It's like this creature that has its own entity."

By noon the next day, the crew is still trying to reach 2,400 degrees and hold it. They have been exhaustingly close to the flames. McIlhargey's mom and her sister have been cooking lunch — a Persian meal.

Brian Hart, also down from Indiana, has been enjoying his cigars.

"There are victory cigars inside, some nice big fat Cubans," he says. "I guess these are just my common working cigars, just something to keep me going."

The firing ends close to sunset and the kiln is sealed with wet mud-soaked newspaper and won't be opened for days.

McIlhargey says he's always overwhelmed by the generosity of his crew, their pride and sense of community. He also understands that they're in love with fire.

"You see the pots in the kiln, you see the flames traveling by them and through them and you literally can't stop looking at it because it's so beautiful," he says.

A few days later, McIlhargey reports that several large platters had cracked. But, firing number 11 at his Miami Valley Pottery is already set for May.