Accessibility links
Scientists Turn Trees Into Carbon Banks Scientists in California are experimenting with carbon banking. The idea is to manage forests so they absorb more carbon dioxide from the atmosphere and slow down global warming. Countries could, in essence, be paid to turn their forests into carbon banks. But first, climate scientists need to become climate accountants — to put hard numbers on how much carbon trees breathe in and out. 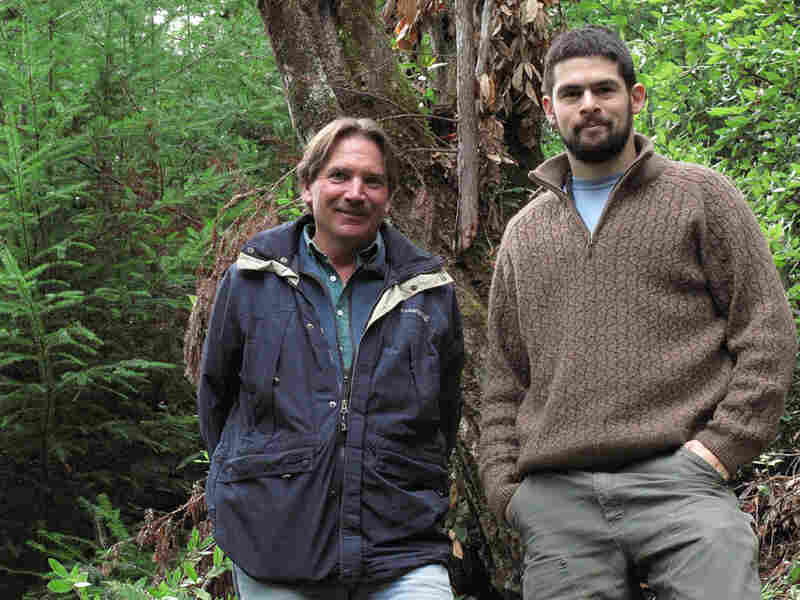 Chris Kelly and Jordan Golinkoff of the environmental group The Conservation Fund. They are experimenting with carbon banking in The Big River Forest in Northern California. Chris Joyce/NPR hide caption 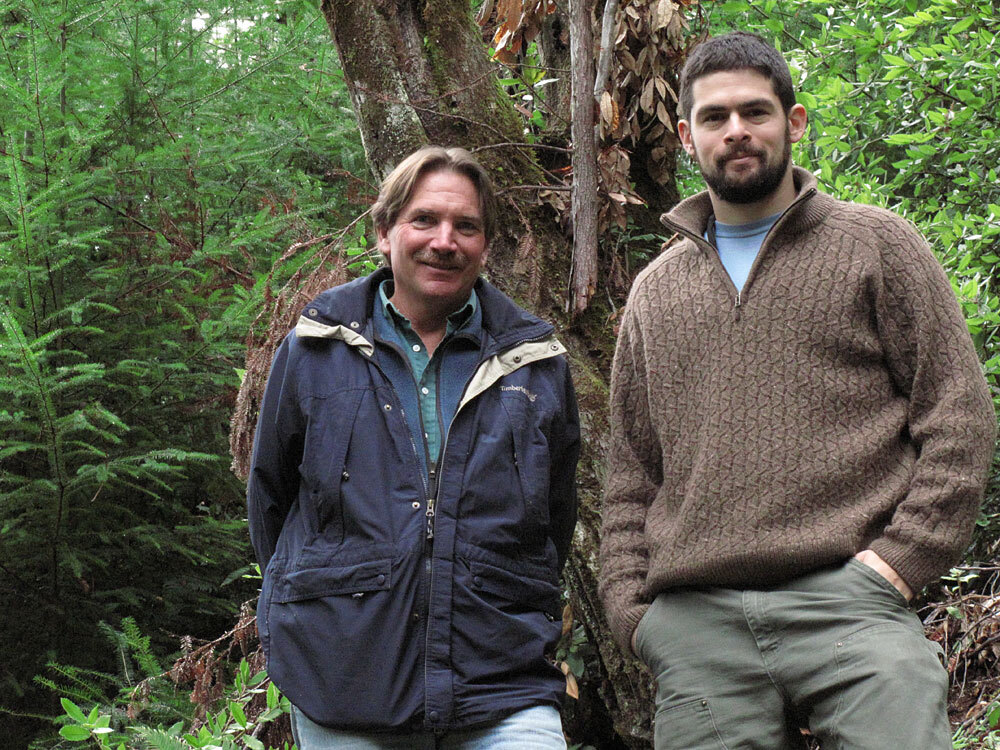 Chris Kelly and Jordan Golinkoff of the environmental group The Conservation Fund. They are experimenting with carbon banking in The Big River Forest in Northern California.

There's an experiment going on in the redwood forests of northern California: people are trying to turn trees into "carbon banks."

The idea is to manage forests so they absorb more carbon dioxide from the atmosphere and slow down global warming. Carbon banking will be a hot topic at next month's big climate conference in Copenhagen, especially if negotiators can't agree on how to get industrialized countries to lower their own emissions. Carbon banking could be a way to cut those emissions by paying poor countries to save their forests and manage them better.

But to do this, climate scientists need to become climate accountants — to put hard numbers on how much carbon trees breathe in and out. That's what the California experiment is all about.

Carbon Banking In The Redwoods

Some of those accountants can be found in the Big River forest, a mountainous swath of oak, Douglas fir and redwood in Mendocino County. The Conservation Fund, an environmental group, has bought 16,000 acres of this forest and put it aside for an experiment.

A walk along a muddy trail with the fund's Chris Kelly takes us through thick undergrowth and small trees — the kind of forest that comes up after heavy logging.

"It's as if you just cast out seeds on the ground in your garden and then didn't come back and weed it," Kelly says. "As a result, what you get is a choked garden with skinny carrots and underripe fruit."

But that's just the kind of forest the fund is banking on ... literally.

"What we're trying to do is come in and thin the forest, and leave the bigger trees to grow, and as a consequence of that thinning, they will grow bigger, faster," Kelly says.

The accounting is tricky. If you cut down a tree, its carbon eventually goes up into the atmosphere. Foresters have to prove their "weeding" will produce a net gain — meaning more carbon will be stored in the trees that remain and grow than is released when the foresters weed.

Calculating What's In The Carbon Bank

Foresters have to do measuring. Lots of measuring, from fallen trees to big branches on the ground. When the wood eventually rots, it emits carbon, making it a liability on the balance sheet.

But the big redwoods are the assets, like the bank vault, where the big carbon gets stashed away, year by year.

Forester Jordan Golinkoff is also a fund mathematician. He keeps the carbon balance sheet for this forest.

"Redwoods are kind of amazing," Golinkoff says. "They can grow hundreds and hundreds of years and still be measurably increasing in size and growing."

That makes them the ideal trees for carbon banking. A typical 25-inch-diameter redwood can store about a ton of carbon.

"Carbon is roughly 50 percent of the mass of most trees," says Golinkoff.

The Conservation Fund calculates that over two years, its forest has soaked up an extra 350,000 tons of carbon. That's roughly equivalent to taking 80,000 cars off the road for a year.

And Golinkoff says there are other benefits.

"By managing for carbon, we're not going to be harvesting as much, and harvest disturbs the soil, harvest reduces the size of trees, and so in general when we have bigger trees and less disturbance, you have creeks ... that are shaded. They stay cooler. Fish like that."

But once you've banked your carbon, what's it worth? The fund is actually making money by selling carbon credits to people trying to "green up" their image or who want to offset their carbon footprint. Every ton of carbon is worth one credit.

It's a small market now, mostly in California. But it's growing, and negotiators in Copenhagen next month want to do the same thing around the world.

Gary Gero runs the Climate Action Reserve, which sets standards for carbon trading. He says once you legally limit carbon emissions, carbon banking starts to make business sense. "Businesses in California said, 'We know you are going to regulate this someday, so give us the ability to start now reducing greenhouse gas emissions and ensure we are recognized for those reductions.'"

And Gero says that gives people who own forests a new option — to either cut for timber, or grow a carbon bank instead. Or, as the fund is doing, a little of both.