Accessibility links
Terrorism Justice: Courts Vs. Commissions Critics of trying the alleged Sept. 11 co-conspirators in civilian court in New York argue that the venue is inappropriate for terrorism suspects. But supporters say those fears are overblown, and that a federal trial would avoid the taint of the long-troubled military commission system. 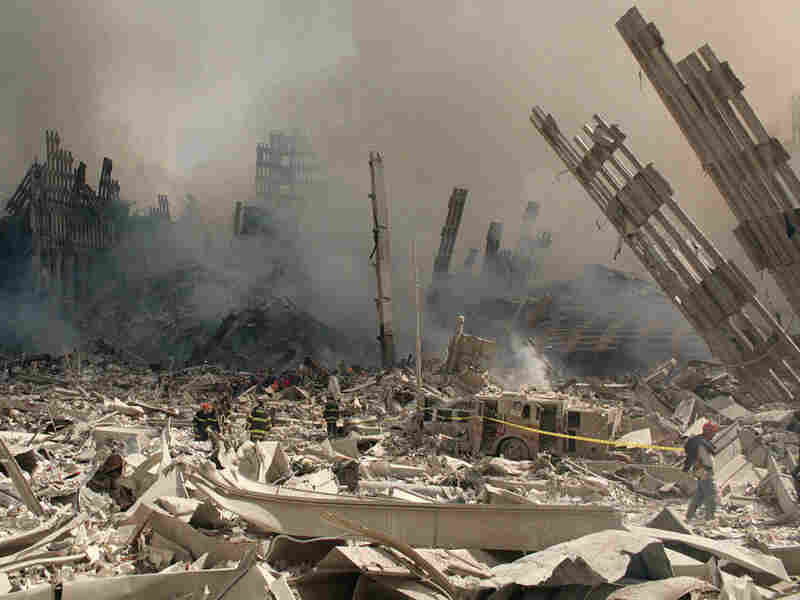 A jury trial would be a spectacle, they say, and could reveal classified information.

Supporters, including former top legal officials with the Bush administration, say those fears are overblown and that a federal trial would remove the proceedings from the taint of the long-troubled military commission system.

"The commissions are a failed experiment," says lawyer Devon Chaffee of Human Rights First. "It's time to shut the door."

But legal experts say the differences between the two trial venues are far less than partisans suggest.

That wasn't the case eight years ago, when the Bush administration first set up the military commissions to try prisoners at the U.S. military prison in Guantanamo Bay, Cuba.

The military commissions have come a very long way in terms of fairness. But the question is, are they too tainted from their earlier incarnation to be politically viable?

Back then, the system's controversial rules of evidence allowed coerced testimony. Its stark limits on defendants' rights to due process were eventually declared unconstitutional by the U.S. Supreme Court.

Legal experts say the system has been improved by a series of changes, including tweaks made earlier this year by Congress. Recent changes include new limits on hearsay evidence and statements gained through "cruel, inhumane and degrading treatment," and improved access to counsel for defendants.

Human rights activists say the changes, yet to be instituted, are a step in the right direction. But by still allowing hearsay and coerced testimony, the commissions, they say, continue to fall short of guaranteeing full justice to defendants.

But many legal scholars say that if commissions remain suspect in the eyes of some, it's because of their controversial history, not their current rules.

"But the question is, are they too tainted from their earlier incarnation to be politically viable?" he said.

Holder has provided mixed signals on that question: While the alleged Sept. 11 conspirators will be tried in federal court, Holder decided to try five other terrorism suspects in the military commission system.

In Khalid Sheikh Mohammed Trial, Lots Of Evidence, But No Slam-Dunk Nov. 25, 2009

Even under new rules, military commissions differ from U.S. federal courts, as well as the military's court-martial system, in that they still permit coerced testimony obtained at the point of capture, or during related combat engagement.

Commissions also allow hearsay evidence, which is barred in federal courts and generally prohibited in court-martial proceedings. Military commission judges have great latitude over whether and when to allow hearsay into evidence.

In federal court, prosecutors will have to adhere to a higher standard of evidence and factor in case precedent — which essentially does not exist in the military commission system, where only three detainees have been tried.

Since the Sept. 11 attacks, 119 terrorism cases involving 298 defendants have been prosecuted in federal court — most frequently in courts in New York City and Northern Virginia. The courts have a 91 percent conviction rate; nearly 60 percent of the defendants pleaded guilty.

But when it comes to federal trials for terrorism suspects, the biggest point of contention involves classified information: Would secret information, under civilian trial rules, necessarily have to be revealed to defendants and their lawyers?

Scharf says lawyers for detainees being tried in federal court will likely try to get as much classified information about their clients' treatment as possible.

"They will turn as much of their trial as possible into a trial about the detention of prisoners at Guantanamo Bay," he says.

One of the most exhaustive reviews of post-Sept. 11 terrorism trials in federal courts was done by the advocacy group Human Rights First.

Lawyers who conducted the review concluded that while CIPA is "subject to being improved," they were "unable to identify a single instance in which CIPA was invoked and there was a substantial leak of sensitive information as a result of terrorism prosecution in federal court."

That includes Andrew McCarthy, the lead prosecutor in the 1993 World Trade Center bombing case. McCarthy has been a leading voice in arguing that federal judges do not have the leeway that military commission judges do when it comes to deciding whether the government can shield certain information from defendants.

In the commission system, he says, defense lawyers can be required to have security clearance to have access to certain information during the discovery phase of the trial.

McCarthy also foresees problems with the federal court trials because detainees were not read their rights when they were captured. Yet he says he still believes that Holder will get convictions in New York City.

"The issue for me," he says, "is in terms of national security and whether it's a good way to do this, which I don't think it is."

"Litigation success," he says, "does not equal national security success."

But proponents argue that the nation can achieve both types of success in federal court. And that, they say, would go a long way toward restoring America's reputation for respecting the rule of law.

"We've never taken the position that there is never a time that military commissions might be necessary," says Chaffee of Human Rights First. "But, at this point, the Guantanamo cases are not going to have legitimacy unless they go through an Article 3 court."