Accessibility links
Job Crunch Even Harder On People With Disabilities Large numbers of Americans are still losing their jobs, but the unemployment rate is particularly high among people with disabilities. They are almost twice as likely to get laid off and they have a harder time finding new jobs. 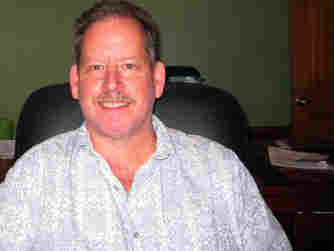 Lenny Kepil sits at his video phone relay service which he uses to communicate. Kepil, who is deaf, was recently laid off and is looking for work. Lenny Kepil hide caption

As large numbers of Americans deal with losing jobs, the unemployment rates are even higher among certain groups, including men, minorities — and also people with disabilities.

Lenny Kepil knows. He was laid off from his job this spring as a software test engineer. He'd been the last hired, but his whole department took a hit. "It makes you nervous when you're laid off a long period of time. And right now, it's been seven months so far," he says. "So I have to get ready for the reality that things are stacking up against me."

Kepil, who lives in Naperville, Illinois, has an impressive resume with more than 26 years as a software engineer. He's also deaf.

It's hard enough for anyone to find work in this recession. It's much harder for someone with a disability.

And the numbers look even more dire when you consider how many people with disabilities have given up looking for work altogether. They don't even get counted as employed or unemployed.

In all, "21 million out of 26 million people with disabilities are not even in the labor force," says Richard Horne, with the Office of Disability Employment Policy at the U.S. Department of Labor. Surveys show that the vast majority of these people want to work, but after looking and getting nowhere, they stop trying.

"So they're not looking for work, they feel there are no jobs for them, they are very marginally attached to the labor force," says Horne. "For our thinking, it's this persistence for people with disabilities not being in the labor force and why is that. That to me is the challenge."

One problem is that workers with disabilities often rely on government health care, but they can lose it if they make too much in salary. So there's a disincentive to work.

Jobs Are Harder To Find

Another challenge is that employers might underestimate someone's ability to do a job. Sometimes bosses worry that they'll get sued if things don't work out. Or they think it will be too expensive to buy technology or make other workplace accommodations for a worker with a disability. Still, a survey by the Department of Labor's Job Accommodation Network found that most accommodations — in 56 percent of cases — are made at no cost. And when there was a cost to employers, it was, on average, just $600.

Kepil says he needs little: He communicates with colleagues easily by e-mail. When necessary, he uses a free, national video telephone relay service. A hearing person can call the relay service and speak to an interpreter who then connects to Kepil over a video phone. The interpreter signs the words of the hearing person to Kepil and he uses his own voice on the phone to respond. It's technology that makes using the phone easy for a deaf person. Only once in his job did he need a sign language interpreter and that was for a few hours when he attended a training class.

One other barrier to finding work in this recession is that states have cut back services, says Barbara Otto, of Health & Disability Advocates, a Chicago agency that helps people find work or social services. "This recession is really different," Otto says. "In past economic downturns, state budgets weren't so tight and people might be able to access post-secondary education or other vocational training to help them improve their odds of getting a job. But now with state budget cuts, it's really tough."

At age 54, Kepil's a realist. "Because the economy is so bad, I'm actually doing a two-track approach. I'm looking for jobs and I'm also getting ready for an early retirement. I would probably have to sell the house. I would probably have to move to a state where the cost of living isn't quite so high. Beyond that, I don't know. I've never been retired. So it's going to be a learning experience for me."

But retirement's expensive. He's already buying his own health care and, without a new job, he'll have to apply for disability benefits.