Accessibility links
Young Latinos, Blacks Answer Call Of Mobile Devices Americans are increasingly using hand-held devices to access the Internet and for texting, sending e-mails, playing music and instant messaging. A large number of those hyperusers are young Latinos and blacks, who crave the convenience of staying connected wherever they go. 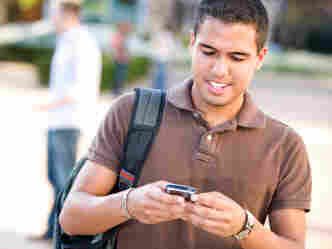 Who Uses Mobile Devices The Most?

About a third of Americans have gone online using a cell phone or other hand-held device. And an increasing number of people are using the devices for activities such as texting, sending e-mails, playing music and instant messaging.

According to a new report by the Pew Hispanic Center, most of those hyperusers are young Latinos and blacks.

There are four main reasons for that trend.

Three teenagers on their way home after an evening out in a Washington, D.C., suburb, pausing at a crosswalk in a busy pedestrian mall, offer an example of the first reason: networking.

Jasmine Miller, 16, is African-American and is texting a wannabe suitor. She's with Alexis White, 16, and Jamila White, 13, sisters whose parents are from Panama.

They say their phones are always with them and they use them to text, connect to the Internet or get directions from a GPS application.

Now that they text, they use it to stay in touch with their parents throughout the day.

"They text to us while they're working to tell us what we're going to do after school," Alexis says.

Adds Jamila, "My dad thinks it's cool! He just learned all this new technology."

That cross-generational exchange is typical of how the use of technology catches on, then spreads among just about all ethnic groups.

It just happens more among blacks and Latinos.

Both the Pew Center and the Nielsen Co. report that blacks and Hispanics are using their phones more robustly than are whites.

Nielsen's numbers say Hispanics pay about $10 more per month on their cell phone bills than the average because of the increased services.

Cell phone store sales representative Gustavo Rojas is watching this trend develop firsthand. He serves Spanish-speaking customers who come in asking to upgrade their cell phone plans to include texting and Internet connections.

Cheaper Than A Home Connection

These customers represent reason No. 2 for increased use among Hispanics and blacks: A mobile upgrade is cheaper than paying for a home broadband connection and a computer.

And once they purchase additional service, Rojas says, his customers adapt very quickly.

"People are so sophisticated now. In their countries, they may not have been so tech-savvy but here they come and use the service" Rojas says. "Soon they know how to chat better than I do. They come in and show me things rather than me showing them!"

Not far from that sales counter, Ornelio Perez is waiting for a bus after a day at his landscaping job.

He's 46, from Guatemala, and represents another of the four reasons for the increased use: convenience.

"Sometimes my family in Guatemala leaves me a text message or I send one to them. For us it's easier to stay in contact across borders and time zones with texting and calling."

For Youth, It's About Convenience

In a Washington, D.C., high school, a group of black teenagers represents the fourth reason for increased usage: youth.

Roosevelt High School senior Lawan Johnson says she uses a phone because of the cost and convenience.

Her dependency on mobile technology makes her an early adopter.

"I decided I wanted a phone over a laptop," Johnson says. "Like you have to worry about Wi-Fi and all that stuff. And you're not always going to be able to take your laptop everywhere you go, so I decided a phone is more convenient."

Classmate Robert Charmer, who is sitting right next to Johnson, receives a text message from her, which causes the two to erupt in laughter.

Just a few years ago these mischievous teens might have been on the losing side of the so-called digital divide.

But with their sophisticated uses of hand-held devices, blacks and Hispanics may be looking across that gap from the other side.