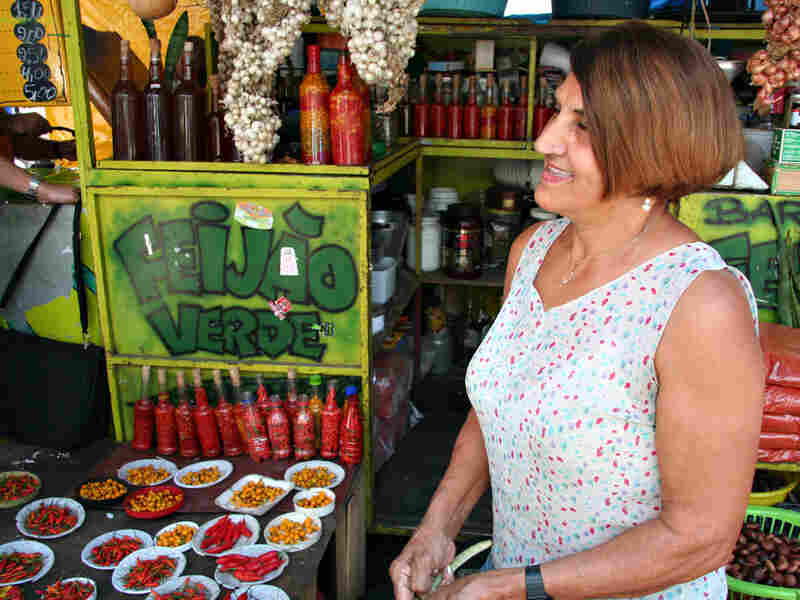 Teresina Lopes Vieira da Silva sells spices and peppers from a street stand in the tough neighborhood of Rocinha in Rio de Janeiro. But she also supplies upscale restaurants and has been able to buy two homes for herself. She credits a robust business environment — and two government-backed loans — for her good fortune. Peter Breslow hide caption 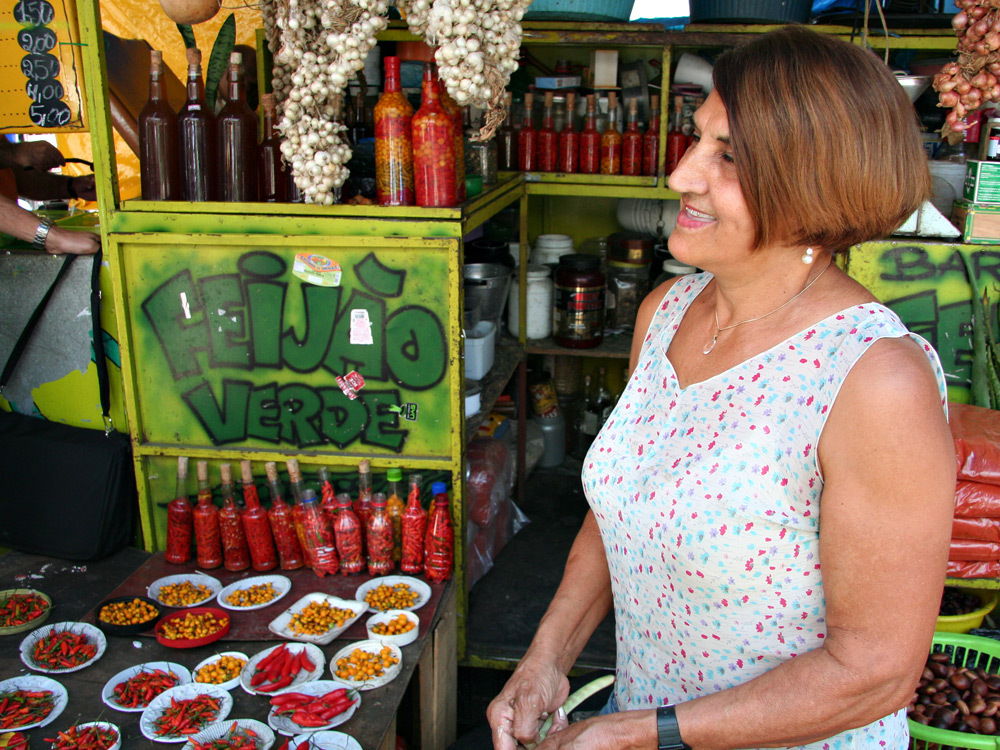 Teresina Lopes Vieira da Silva sells spices and peppers from a street stand in the tough neighborhood of Rocinha in Rio de Janeiro. But she also supplies upscale restaurants and has been able to buy two homes for herself. She credits a robust business environment — and two government-backed loans — for her good fortune.

The cruel joke about Brazil was that it was the country of the future — and always would be. But now, Brazil is meeting its potential like never before.

Impressive economic growth, a booming commodity sector and the country's popular government are receiving worldwide attention. The country's center-left president, Luiz Inacio Lula da Silva — who as a boy shined shoes on the street — has led a crusade against poverty.

Innovative state programs, along with the economic growth, are lifting millions of Brazilians into the middle class and making the country a model for the developing world.

On a recent day in Rio de Janeiro, Renatta Mancini walks amid brightly colored skirts and blouses at the Cantao store in the city's snazziest mall. A buyer for the upscale store, Mancini says business is good. She says the store's clothing designs show originality and the highest of quality.

That quality is a trademark at Alan Roberto Lima's small sewing shop on a narrow residential street in a rough neighborhood far from Rio's glitz.

Lima, 34, is big and stoic — characteristics that served him well in the past, when he was dealing cocaine. But Lima says he turned to fashion a few years ago when he took stock of his life. He started by making T-shirts and shorts in his home.

It helped that Brazil was then beginning its economic transformation, and Lima praises the government for putting the economy on track — and keeping it there.

Lima calls it a revolution.

That revolution means Lima has joined the middle class. He owns a house and a car, and he is selling clothes to some of Rio's trendiest shops, including Cantao.

Lima says he is now thinking of creating his own clothing line once he makes an investment in newer, more modern machinery. He even dreams of owning a shop in Rio's wealthy south, right on the beach.

Brazil, with a land mass larger than America's lower 48 states, was always said to be on the cusp of prosperity. Yet, one crisis after another held it back: hyperinflation, oil shocks, the Asia crisis, devaluations and defaults.

But today, Brazil is surviving the global economic downturn better than just about any country in the world. Once again, the economy is poised to grow by 5 percent.

Political analysts say Lula's steady hand has won admirers the world over. That was never more apparent than in October, when Rio was awarded the 2016 Olympic Games.

Economists say Lula has been a responsible steward of the economy, following the lead of his predecessor, Fernando Henrique Cardoso, who tamed inflation.

Nonetheless, Brazil remains a country with desperate poverty and, in its poorest slums, untold violence. And the country's business climate is far from perfect: Economists say an overbearing state bureaucracy makes it a slog to start a business. Roads and ports need vast improvements. Corruption is still a scourge.

But despite the red tape, businessmen are bullish about the country, which has embraced globalization.

Brazil is now the world's eighth-largest economy, and that growth is trickling down — with 8.5 million jobs created since 2003, and 32 million people joining the middle class, according to Marcelo Neri, chief economist at the Center for Social Policies at the Getulio Vargas Foundation, a private think tank.

"Brazil is really having a wonderful time now, in terms of collecting, harvesting very good results. We used to say that Brazil is the country of the future. The future is now, it's going on, it's occurring now," Neri says.

But it's not just the healthy economy that is helping Brazil's masses. Programs such as Bolsa Familia provide food payments to millions. In exchange, recipients must make sure their kids are in school. There are also low-interest loans for new homebuyers and for small businesses.

One of Rio's most forbidding districts is Rocinha, which has a reputation as a tough favela, or slum. But it is also filled with opportunities: New businesses are cropping up, and old businesses are doing better.

Teresina Lopes Vieira da Silva sells spices and peppers from a street stand. But she is not just a street vendor: She has a successful business selling to upscale restaurants.

She credits a robust business environment — and two government-backed loans — for her good fortune. She says the loans helped her buy supplies in bulk, meeting the demands of her customers. Over the years, she has saved up to buy two homes.

She is not the only one making purchases.

The Ponto Frio appliance store in downtown Rio is filled with shoppers. In practically all major stores in Brazil, buyers are offered credit at low interest rates.

Dulcinea Fejeira bought her first computer two months ago. Now, she is looking for a new fridge.

Brazil is much better now, she says, adding that Brazilian friends who had created new lives for themselves in New Jersey, Florida and Italy are coming back.

Fejeira recalls growing up poor, and how she and her family toiled away to pay for her education. Now, she is a psychologist and, she says proudly, a member of Brazil's expanding middle class.