Accessibility links
Movie Review - 'Serious Moonlight' - A Lawyer And A Cad, Ill-Met By 'Moonlight' When her husband (Timothy Hutton) spoils a romantic weekend by announcing that he's leaving her for a younger woman, a New York lawyer (Meg Ryan) decides to hold the cad hostage. Then the burglars arrive. Critic Jeannette Catsoulis says this misshapen hybrid of romantic comedy and home-invasion nightmare is a tone-deaf exploration of marital dysfunction, unbearable to watch and excruciating to listen to.

A Lawyer And A Cad, Ill-Met By 'Moonlight'

A Lawyer And A Cad, Ill-Met By 'Moonlight' 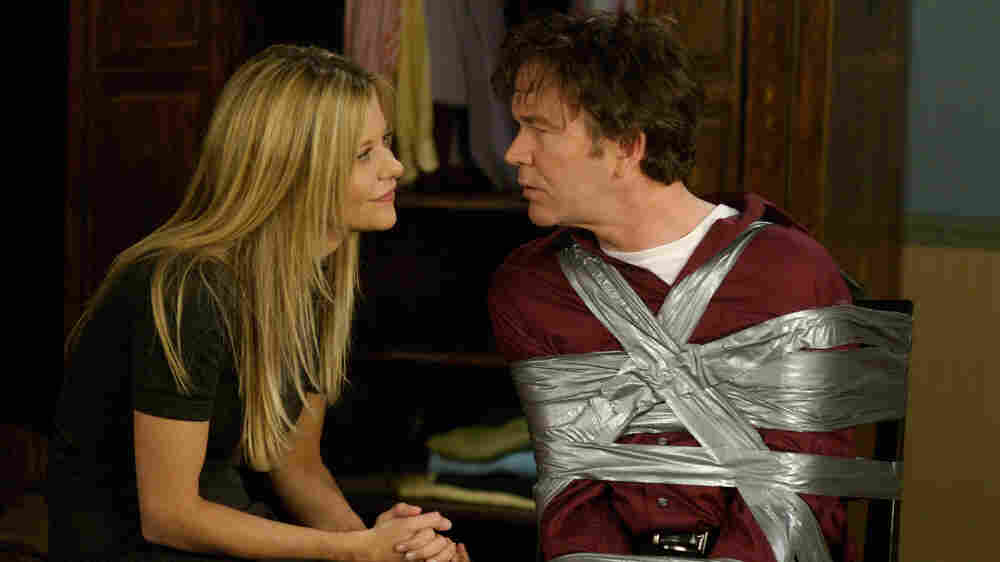 Tape Delay: Unfaithful Ian (Timothy Hutton, right) has plans for a Paris escape with a younger woman, but things get sticky when his lawyer wife (Meg Ryan) finds out. Magnolia Pictures hide caption

'Just Look At The Slides'

'Proof Of A Higher Power'

Serious Moonlight plays like the result of an unfortunate hookup between Nora Ephron and Michael Haneke. A misshapen hybrid of romantic comedy and home-invasion nightmare — with a dash of slapstick for good measure — the movie is a tone-deaf exploration of marital dysfunction, unbearable to watch and excruciating to listen to.

The directing debut of actress Cheryl Hines (who should hang on tight to her job with HBO's Curb Your Enthusiasm), the film stars a horrendously miscast Meg Ryan as Louise, a high-maintenance lawyer. Arriving a day early to meet her husband, Ian (Timothy Hutton), at their country home, Louise finds him strewing rose petals and penning a goodbye note informing her of his plans to escape to Paris with his dewy girlfriend (Kristen Bell, suggesting that life after Veronica Mars is not exactly packed with opportunity). Like any sensible wife, Louise clocks Ian with a vase and duct-tapes him to a chair.

What follows is a tortured tango of abuse and wheedling, anger and recrimination. Betting on the Stockholm syndrome to regain her errant husband's love, Louise plies him with wedding pictures, vacation slides and homemade cookies. The role is tonally preposterous, one that demands manic reversals of behavior, and Ryan has never been less at ease. Confined to claustrophobic interior sets, toggling between demented screeching and piteous face-scrunching, Ryan works hard but lacks the range to make the character believable. (A scene where she throws up only inspires unfavorable comparisons to Jill Clayburgh in An Unmarried Woman.)

Even Hutton, who has emerged unscathed from not a few painful projects, finds himself at a loss; forced to say most of his lines while half-naked and taped to a toilet (don't ask: If only continuity were this film's biggest problem), the actor can do little more than grit his teeth and try to keep his legs together. Meanwhile Hines' camera, more static than Ryan's magnificently stalled career, returns repeatedly to immobile shots of flowers and an agitated — and sadly doomed — goldfish.

An exceptionally likable and talented actress, Hines proves barely competent in her new role, displaying no facility with the material's stagey structure. This is even more apparent when Justin Long shows up as a pitiless thief, riding a lawn mower and trailing a trashy entourage. As the movie topples from black comedy to queasy thriller, the director observes the couple's suffering with a curious detachment, as though being slapped around by a burglar were just an unorthodox form of marriage counseling.

Yet the intruder's violent abuse, particularly of an unconscious Louise, painfully calls to mind the horrific bathroom slaying of the film's screenwriter, Adrienne Shelly, barely three years ago. Shelly's beautiful work as the writer and director of 2007's Waitress suggests that other cooks might have had a hand in this broth; either way, it seems unlikely that she would have produced such an unmitigated disaster. In the end, perhaps the saddest thing about Serious Moonlight is that Hines and her collaborators clearly intended the film as a tribute; instead, they've created a travesty.