Accessibility links
Excerpt: 'Everything Matters!' While still in the womb, Junior Thibodeau is informed by a dispassionate and slightly officious voice that the world will end in 36 years, 168 days, 14 hours and 23 seconds. As the protagonist of Ron Currie's high-wire act of a novel grows to manhood, that fact, and that voice, remain his constant companions. 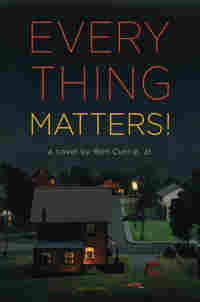 First, enjoy this time! Never again will you bear so little responsibility for your own survival. Soon you will have to take in food and dispose of your own waste, learn the difference between night and day and acquire the skill of sleeping. You will need to strengthen the muscles necessary to sustain high-volume keening for long intervals. You will have to master the involuntary coos and facial twitches which are the foundation of infantile cuteness, to ensure that those charged with caring for you continue to provide food and clean linen. You will need to flex your arms and legs. Loll your head to strengthen the neck, crawl, stagger to your feet, then walk. Soon after you must learn to run, share, swing a bat and hold a pencil, love, weep, read, tie your shoelaces, bathe, and die. There is much to learn and do, and little time; suffice it to say that you should be aware of the trials ahead so that you may appreciate the effortless liquid dream of gestation while it occurs, rather than only in hindsight. For now, all you need to do is grow.

There is one significant exception to this. You may have noticed that you share the womb with other objects. The most obvious and important of these is the fleshy tether attached to your abdomen, known as the umbilical cord. It is, quite literally, your lifeline, providing blood, nutrients, and vital antibodies, among other things. Already it has wrapped twice around your neck, and while this may not seem to you, who does not yet breathe, to be particularly dangerous or untoward, it can imperil your entry into the world. We will not lie — it could kill you. Now, be calm. You should remain as still as possible throughout the rest of your gestation. While this will do nothing about the entanglements already constricting your neck, it will go a long way toward preventing further looping or other complications — vasa previa, knots, cysts, hematoma. Any of these problems, by itself, is not particularly dangerous, but two or more occurring together can be big trouble, so you should maintain perpetual vigilance against the many temptations to move. Of course, there are some who would argue that it is unfair to ask a fetus to exercise impulse control. You, however, would do well to avoid those who complain about life's unfairness, and instead get a head start on building self-restraint.

Light and noise present the toughest challenge to your resolve to remain still. They come to you through your mother's abdomen, and you feel an impetus to move toward them, to stir the viscous bath of amniotic fluid with tiny fingers and toes in an effort to absorb the warmth of sunlight, or hear Carly Simon trill. The urge to move is natural and understandable. As will be the case throughout your life, no matter how long or brief, the choice is, in the end, yours. Simply bear in mind that every choice will have consequences, and in this instance those consequences would likely be quite grave.

Your mother has one other child, your brother, who was a tornado in utero, so your lack of movement causes her alarm. We should mention that she is prone to unreasonable anxiety and nervous tension, minor disorders that have several underlying causes, not the least of which is the verbal and physical abuse she suffered as a child at the hands of her father. This is why she pokes at you and spends hours with a transistor radio pressed against her belly, trying to bait you into moving. Despite the fact that her abdomen continues to grow, she wakes one night convinced you'll be born an ashen husk, your finger hooked forever into lifeless little claws. With this image lodged in her mind's eye she weeps, her hands laced together in a protective hugging posture under the swell of her belly. Now, a boy's aversion to upsetting his mother is among the more primal and tenacious instincts, and so you suffer an almost irresistibly powerful urge to kick and twirl, to give unmistakable evidence of your life, to turn your mother's sobs to relived and slightly embarrassed little hiccups of laughter. Do not yield to this instinct, or you will put your life at risk. Protecting yourself now means you'll have many years ahead with which to repay her grief. Besides, you can rest assured that this is not the last time you will make your mother cry.

Eventually your father's hands, along with two unscheduled visits to the obstetrician for ultrasound and fetal monitor, soothe your mother's fears to a level she finds tolerable, and she wraps the transistor in its power cord and returns it to the closet, and stops staring for long silent hours at the television.

Although the biological goal of sex was achieved with conception, your father still has a hefty sexual appetite (as does your mother, though out of concern for you she will not admit it). To you his advances are terrifying. You hear him seeking entry with his tongue and other parts of his body, and your instinct is to recoil, which is perfectly normal — the perception of one's father as an omnipotent predator of great physical strength serves as a vital function for most boys, and usually persists well into adulthood, though paradoxically it does not seem to preclude the desperate striving after his love and approval. You try to hold fast, but a stronger more immediate impulse toward self-preservation takes hold, and you kick against the uterine wall, pushing away from the sniffing and growling at the entrance to your home, and as you drift slowly up the umbilical cord draws tighter around your throat, and a knot forms.

Reprinted by arrangement with Viking, a member of Penguin Group (USA) Inc., from Everything Matters! Copyright Ron Currie Jr., 2009 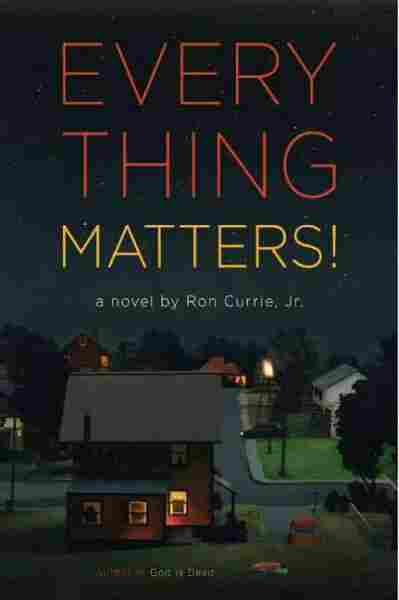