Accessibility links
Officials: 30,000 More Troops To Afghanistan In a speech Tuesday night, the president will announce he will boost the total number of U.S. troops in Afghanistan to about 100,000. He also will try to convince a skeptical public that the U.S. still has the time — and the capability — to reverse the deterioration in Afghanistan. 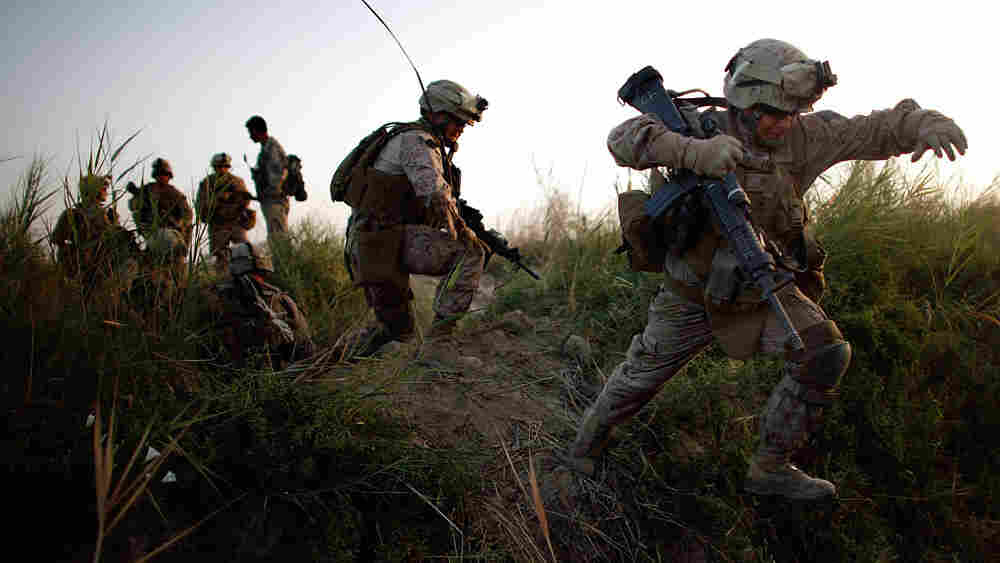 Lance Cpl. Chris Garcia and other members of Golf Company cross an irrigation ditch as the 2nd Battalion, 8th Marine Regiment moves into Helmand province in July during a major offensive against the Taliban stronghold in southern Afghanistan. David Gilkey/NPR hide caption 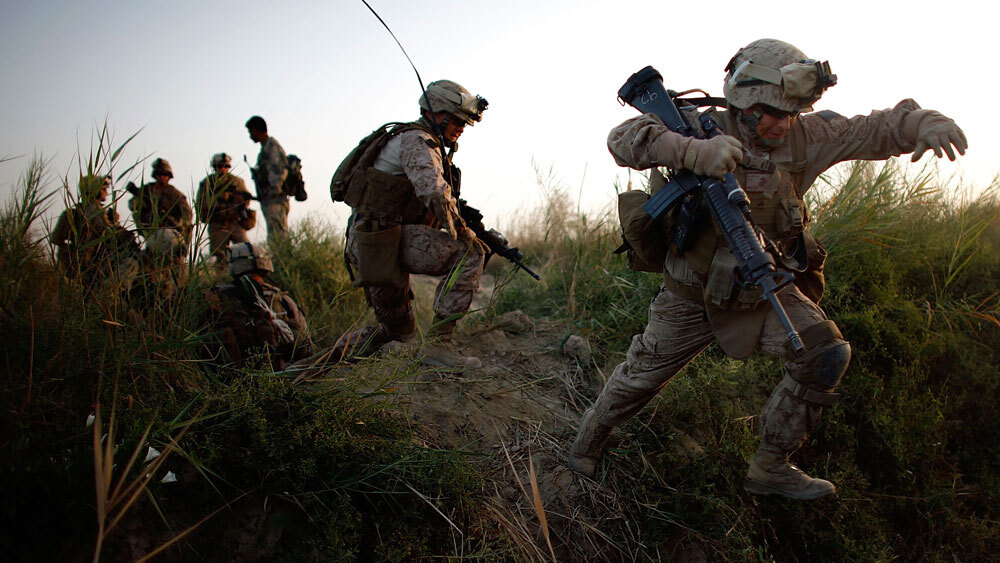 Lance Cpl. Chris Garcia and other members of Golf Company cross an irrigation ditch as the 2nd Battalion, 8th Marine Regiment moves into Helmand province in July during a major offensive against the Taliban stronghold in southern Afghanistan.

The president also is expected to lay out a rough time frame for the commitment of troops in the address, and is expected to outline their role: to secure population centers in southern and eastern Afghanistan. The increase will bring the total of U.S. troops in Afghanistan to more than 100,000.

More On The War

After an exhaustive three-month strategic review, Obama will launch his second significant strategic escalation of the U.S. military's involvement in Afghanistan with Tuesday night's address.

A lengthy set of deliberations that included 10 high-level war council meetings has led to the speech, to be given at the U.S. Military Academy at West Point.

More broadly, Obama will be trying to convince a skeptical American public that the United States still has the time — and the capability — to reverse the deterioration in Afghanistan.

He presented his planned overhaul to his top advisers on Sunday and to close foreign allies on Monday. The White House portrayed the president's decision-making process as a rigorous and exhaustive effort to gear U.S. strategy more firmly toward the eventual withdrawal of U.S. forces.

The prime-time speech is a pivotal moment for the Obama White House, which needs to find some way to reverse a broad set of downward trends in Afghanistan and neighboring Pakistan.

Obama conducted many of his formal policy sessions in the White House Situation Room, speaking with generals in Kabul by secure videoconference. But the debate also played out in public through a constant stream of leaks, speculation and partisan sniping.

Obama's critics, such as former Vice President Dick Cheney, decried him for "dithering" and showing weakness.

Adding Up The Afghan War

Estimates vary on the cost of the war to taxpayers. The Congressional Research Service says it totals $227 billion so far.

Perhaps a bigger factor in any delay was the situation on the ground in Afghanistan, where record levels of violence and a disputed election that threatened the legitimacy of the Afghan government punctuated the debate in Washington.

Either way, the origins of Obama's West Point speech stretch back much further than the launch of this latest strategic review in September.

The course was set as far back as April 2007, two months after then-Sen. Obama formally declared that he was running for president. The candidate told a Chicago audience that the U.S. had been distracted by Iraq and needed to focus more attention on Afghanistan, "where more American forces are needed to battle al-Qaida, track down Osama bin Laden and stop that country from backsliding toward instability."

It was a theme Obama would repeat throughout his campaign — an emphasis on Afghanistan, rather than Iraq, as the war America should be fighting to combat global terrorism.

By the final months of the Bush administration, security in Afghanistan had begun to deteriorate rapidly. In July 2008, the number of daily insurgent attacks in Afghanistan surpassed the number in Iraq for the first time. 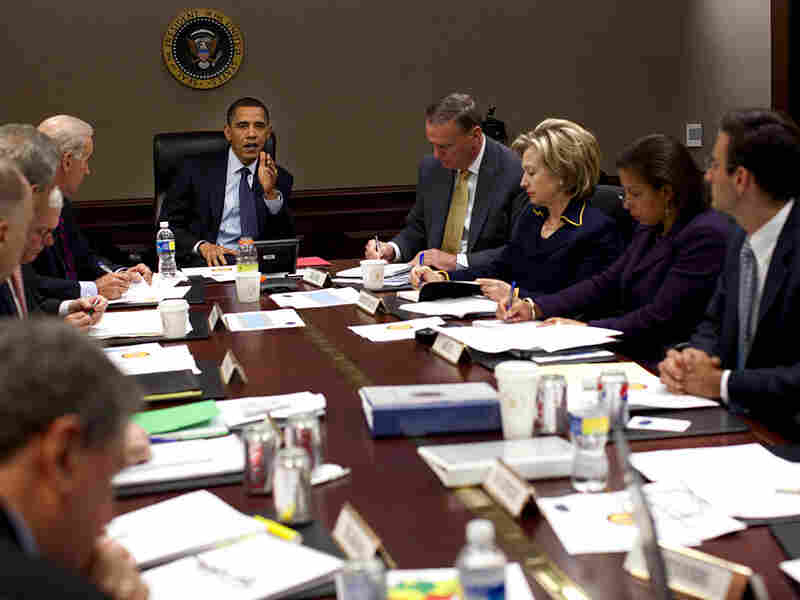 President Obama holds a meeting on Afghanistan in the Situation Room of the White House on Nov. 23 — the last of 10 war council sessions with senior advisers as he contemplated a strategy shift in the war. Pete Souza/AP/The White House hide caption 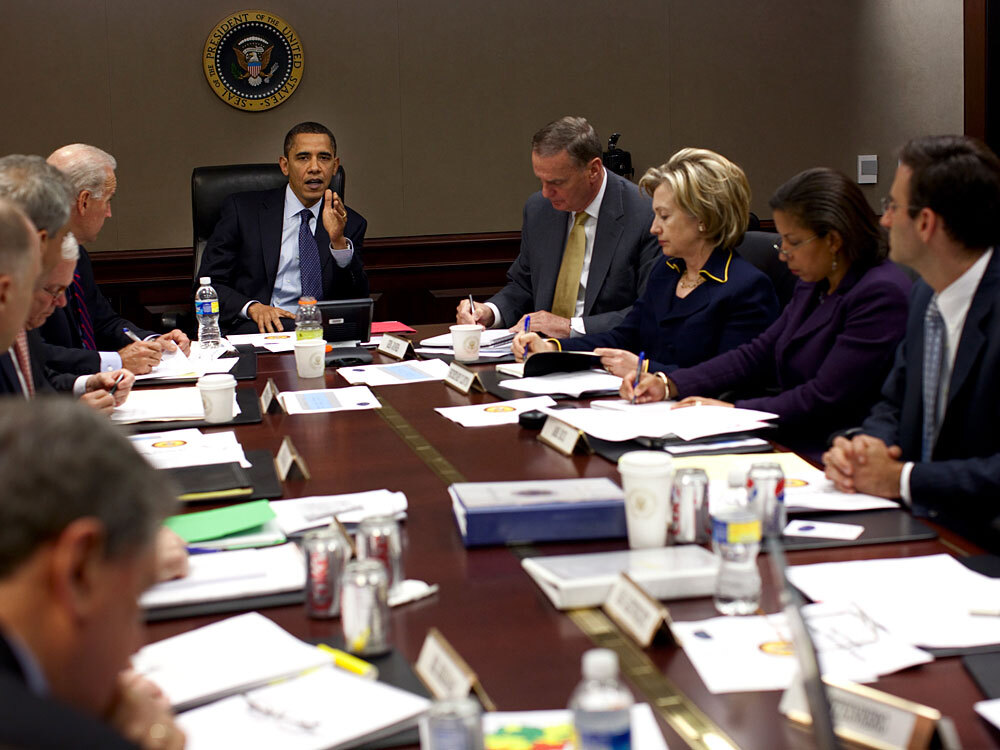 President Obama holds a meeting on Afghanistan in the Situation Room of the White House on Nov. 23 — the last of 10 war council sessions with senior advisers as he contemplated a strategy shift in the war.

And by the time Obama was sworn in as president, the security situation was even worse. Obama immediately launched his first strategic review, a 60-day effort headed by Bruce Reidel, a former CIA official who had been one of his campaign advisers.

Not waiting for the results of that review, Obama in February announced the deployment of 21,000 additional troops to Afghanistan, for a total U.S. presence of 68,000 — where the force level now stands. The president said the bigger force was "necessary to stabilize the situation" in advance of Afghanistan's August presidential election.

As the White House was spending most of its time dealing with the global financial crisis and deepening recession, Obama announced the results of that first review in March. His new strategy called for additional resources for the Afghan effort, a more vigorous civilian effort to rebuild the country and a more concerted effort to train Afghan soldiers.

"We will shift the emphasis of our mission to training and increasing the size of Afghan security forces, so that they can eventually take the lead in securing their country," Obama said. "That's how we will prepare Afghans to take responsibility for their security, and how we will ultimately be able to bring our own troops home."

But less than two months later, with attacks still skyrocketing ahead of the August presidential election, Obama replaced his top general in Afghanistan. His new pick, Gen. Stanley McChrystal, was chosen in large part for his expertise in counterinsurgency.

As the new U.S. commander, McChrystal was given time to conduct his own strategic assessment. The confidential report, dated Aug. 30, was a damning indictment of the current U.S. and NATO strategy, as well as the capability of the Afghan government.

Opinion: Is President Obama Getting It Right?

"The threat has grown steadily but subtly, and unchecked by commensurate counter-action, its severity now surpasses the capabilities of the current strategy," McChrystal wrote. "We cannot succeed simply by trying harder."

By this point, there had been nearly 13,000 enemy-initiated attacks during the first eight months of 2009 in Afghanistan, which was more than 2 1/2 times the number reported in the same period in 2008, according to Pentagon data.

Another key part of the general's recommendation was to boost the U.S. military's partnership with Afghan security forces and the Afghan government.

But even as the White House formally launched its second strategic review to address McChrystal's recommendations, Afghan President Hamid Karzai was engulfed in a controversy over the alleged rigging of the August election.

The ballot-tampering was so blatant and widespread that it threatened to discredit the Kabul government completely.

The dispute dragged on until Karzai eventually agreed to a runoff election after being pressured by U.S. and Western diplomats. His rival, former Afghan Foreign Minister Abdullah Abdullah, dropped out before the vote.

Karzai was finally sworn in for his second term late last month, but his inauguration did little to dispel the deep doubts about his government's ability to tackle corruption and incompetence.

As Obama prepares his speech on Tuesday night, one of his many challenges will be to explain how the United States will plausibly be able to hand over more and more responsibility for Afghanistan's security to Karzai's partially discredited government.

Obama also wants to demonstrate that the U.S. is working toward a broad exit strategy without sparking fear in Afghanistan, Pakistan or elsewhere that Washington is planning an imminent withdrawal.