Accessibility links
Marijuana Sales Boost Northern California County It's boom times for the marijuana trade in Northern California. Rural Humboldt County's economy depends on both the legal and illegal sales of pot, as growers to trimmers to entrepreneurs aim to land quick cash. But some citizens, and the mayor of Arcata, are trying to "rope back in" the business. 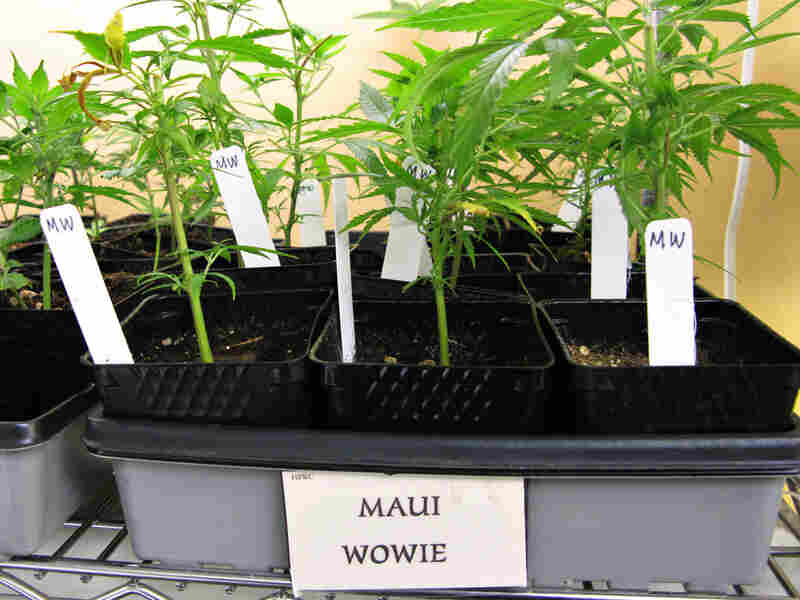 A "Maui Wowie" variety of marijuana is grown at a medicinal marijuana dispensary in Eureka, Calif. Humboldt County remains a mecca for marijuana culture and usage in California. Mandalit del Barco/NPR hide caption 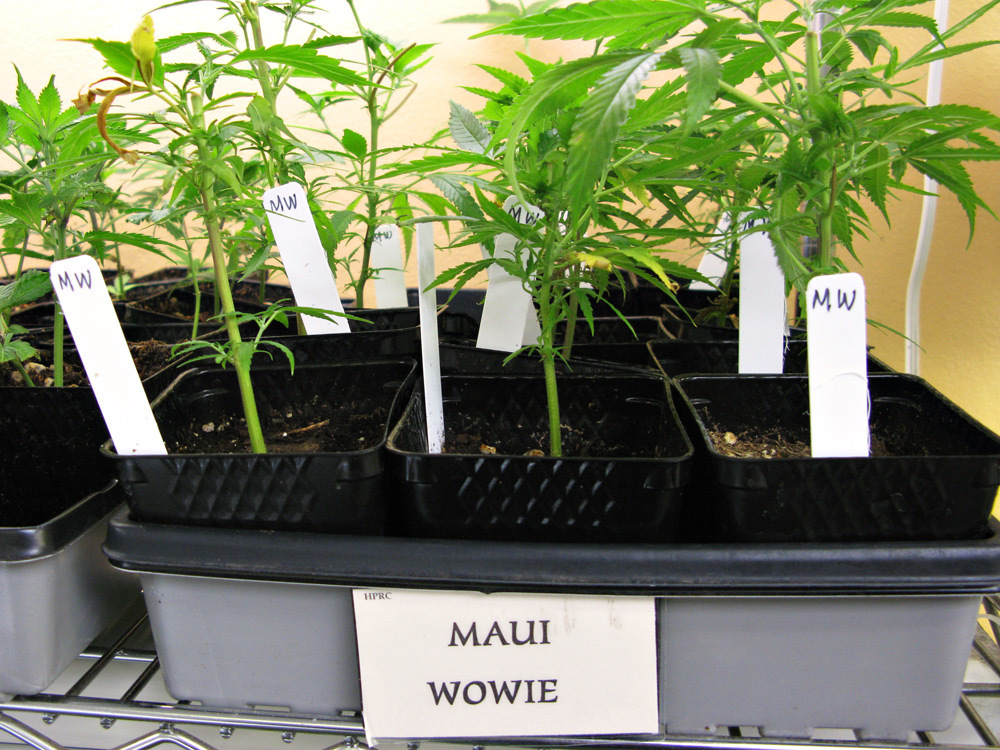 A "Maui Wowie" variety of marijuana is grown at a medicinal marijuana dispensary in Eureka, Calif. Humboldt County remains a mecca for marijuana culture and usage in California.

These are boom times for the marijuana trade, especially in Northern California's Humboldt County. Humboldt pot is sold throughout the country, including some of the many medical marijuana dispensaries in Los Angeles.

Decades after back-to-the-land hippies first moved to the rural area, it remains a mecca for marijuana.

At the plaza in downtown Arcata, there are still wandering, tie-dyed souls playing guitar and bartering for handmade bongs. They openly buy, sell and trade small bags of primo weed.

Nick Larson and his buddy hitchhiked to town to see if the streets truly are paved with pot.

"We've heard stories all the way down: 'Dude, get down to Humboldt. You gotta try their weed, it's amazing!' " he says. "So we get down here and people are like, tossing handouts, and we're just like, 'Oh my god.' Like, whether it be trim or just straight buds, it's just amazing."

In Eureka, the town next door, a long line stretches outside the Humboldt Patient Resource Center. The pot dispensary is marked with the familiar green leaf logo and a Tibetan prayer flag.

"Truth is that Humboldt County is one of the best growers and distributors of marijuana in the world," says Lydia Katz, who's 22. He came to stock up on what he calls his "medicine." "People here understand how much a part of the life's blood it is. Truly, without weed, this county would go belly up. Our economy depends on it." 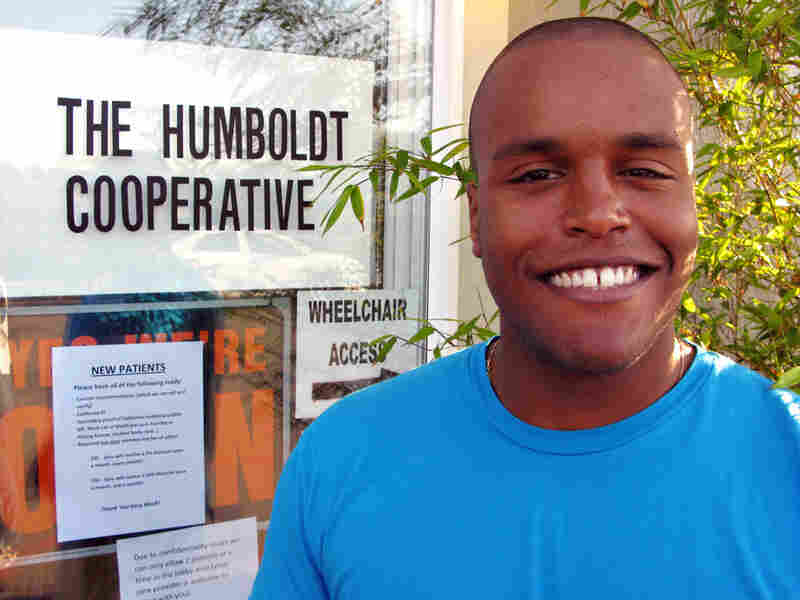 Lydia Katz came to Arcata restock his supply of medicinal marijuana. Katz says he first began "self-medicating" with his parents' blessing at the age of 13. Mandalit del Barco/NPR hide caption 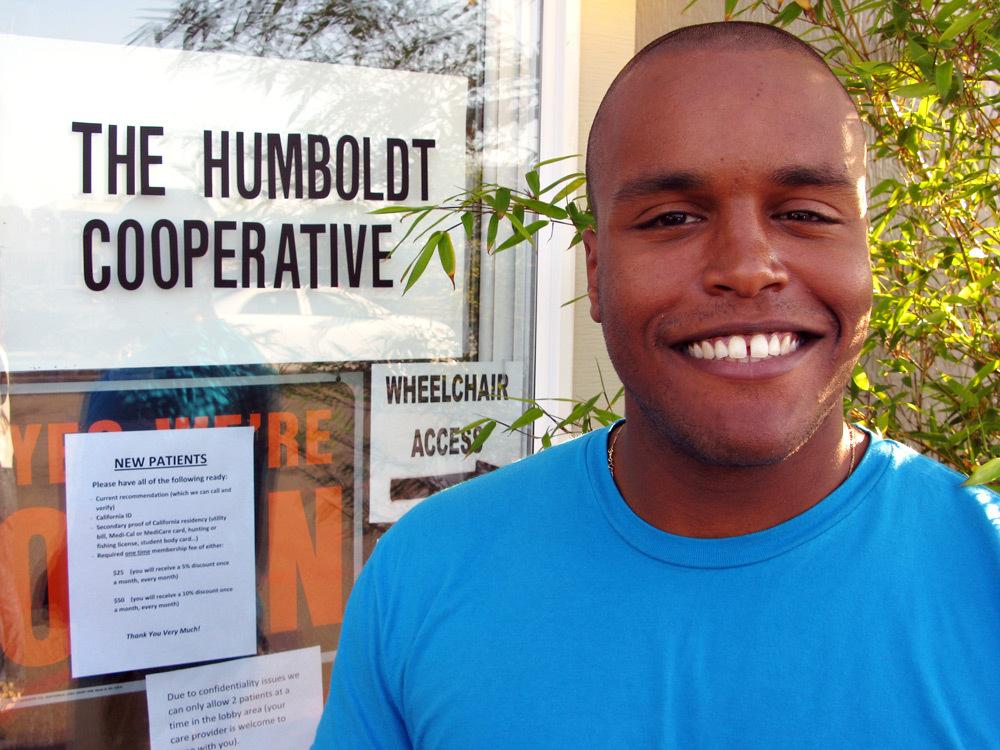 Lydia Katz came to Arcata restock his supply of medicinal marijuana. Katz says he first began "self-medicating" with his parents' blessing at the age of 13.

Retired Sheriff's Lt. Steve Cobine recalls that when logging and fishing jobs dried up in the late 1960s, hippies moved in and bought the cheap leftover land.

"You'd see people living in tepees and tents and dead school buses and whatnot," he says.

Today, he says, the local counterculture pastime of growing marijuana has become a thriving business: "And now those people that were living in school buses own a nice big house and ski in Telluride every year."

Marijuana is now infused in almost every aspect of the region's economy. In Humboldt County, you see a glut of hydroponics stores, selling fertilizer and grow lights for cultivating cannabis. At the food co-op, you can order hemp milk and hemp butter.

Cafe Brio owner Serge Scherbatskoy says many transactions in town are made in cash.

"We see a lot of hundred-dollar bills in the cash register," he says. "There's a lot of money around, so it's good for a lot of businesses."

Scherbatskoy can't say that all the money comes from the marijuana trade. But he claims it's the only job here that anyone really wants, "cause it's real easy for somebody to make thousands and thousands of dollars, and why would they want to work for $10 or $12 or $14 an hour?"

"I'll work a couple months for a good amount of money," she says. "It's always cash."

Humboldt County has lots of pot entrepreneurs. One of them calls himself "Bucky Buck." He gets paid to convert homes into indoor marijuana operations, or "grows."

"It used to be like the Grateful Dead-style hippie thing, everyone's peace and chill," he says. "But now it's more like these aggressive, just transient kind of lifestyles. It's not like the whole peace, love and granola thing anymore."

Bucky Buck says Proposition 215, California's medical marijuana law, spawned a flurry of get-rich-quick businesses here. And now, he says, "it's like you get people who aren't here for the beauty and the love in the area. They're just here to reap the profit." 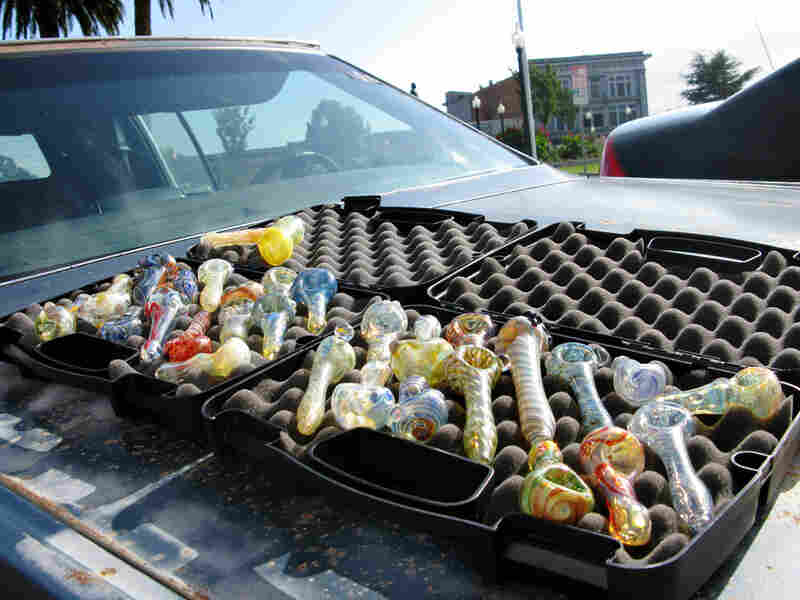 Hand-made pipes are on sale at the plaza in downtown Arcata, Calif. A pot-laced culture still permeates this part of Humboldt County. Pipes such as these can be purchased for cash though they are commonly exchanged for marijuana. Mandalit del Barco/NPR hide caption 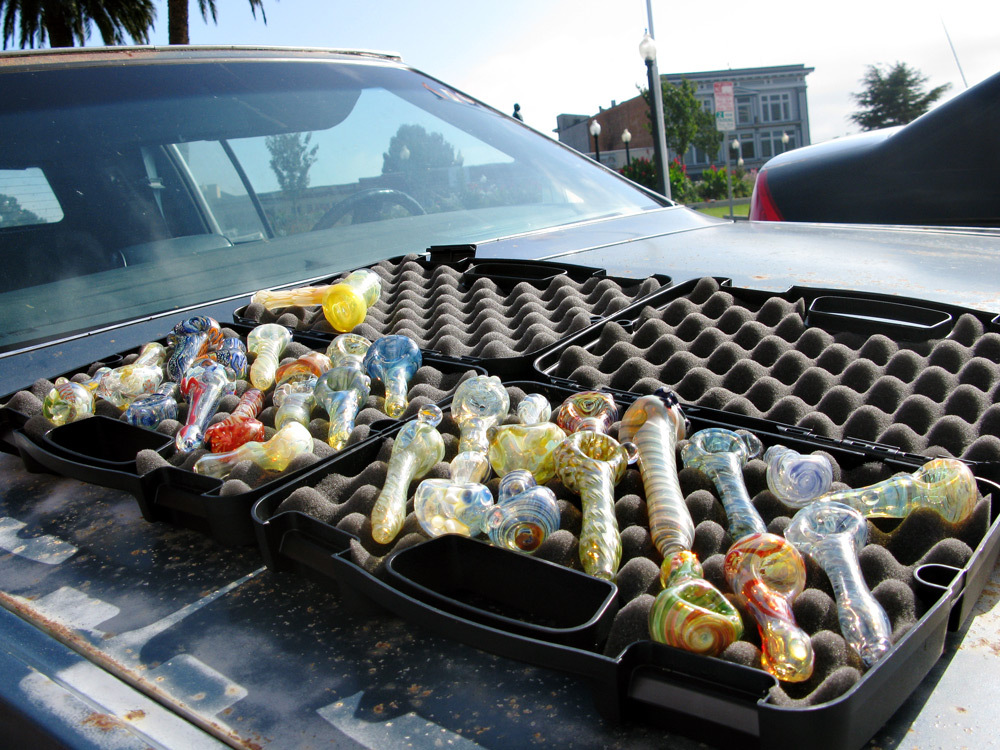 Hand-made pipes are on sale at the plaza in downtown Arcata, Calif. A pot-laced culture still permeates this part of Humboldt County. Pipes such as these can be purchased for cash though they are commonly exchanged for marijuana.

'Our Neighborhoods Are Being Taken Over'

Walking down her street in Arcata, Robin Hashem points out all the homes on her block that are now outfitted to grow marijuana.

"There's a lot of electrical energy being used by grow houses," she says. "So if you go by and look at the meter, it will be spinning rapidly."

There are other telltale signs, she says: Windows covered with plastic, people coming and going at all hours, the smell of marijuana.

"If you look at this house, there's mildew on the curtains," she says pointing across the street. "You're not gonna be having a house full of mildew and be there all the time. You know, they're just not there on a regular basis. They have the kids' bikes out there all the time. It's just making it really, 'Oh, we're normal. Nothing going on here.'"

Hashem says she believes in the compassionate use of marijuana. She voted for Proposition 215. But she's had it with the grow houses that surround her. She's been lobbying the city to curb the spread, a campaign she calls "Nip It in the Bud."

"Our neighborhoods are being taken over by illegal grows," she says, "and we need to do something to stop it."

Mark Wheetley, the mayor of Arcata, says the grow houses are a menace. With jury-rigged electrical wires and toxic chemicals, they sometimes catch fire. And they're easy targets for robbers.

"They're either drug deals gone wrong, or people trying to come in and either steal cash or marijuana from people," Wheetley says. "A lot of it has been people from outside the community that have come in and see this as a quick way to make money. So it's kind of a 'Wild West' mentality that we had to get out in front of and rope back in."

So why doesn't somebody pull the plug on the pot business? That wouldn't be so easy in a place where marijuana is such an accepted part of life. Authorities admit that the county has a lenient interpretation of what's legal under the state's medical marijuana law.

Anyone with a doctor's order for marijuana — called a "recommendation" — can grow as much pot as they want in a 100-square-foot area. But California narcotics special agent Jack Nelsen says some of the locals have gotten carried away.

"They have anywhere from 10 to 100 to 200 plants, and they think that's OK," he says, "Because we've got 15 recommendations around the house for my dog, my cat, my cousin and my brother."

'I Grow As Much As I Can Consume'

Surrounded by his pet ducks and boa constrictors, a pot grower introduces himself as "Mr. Green." He shows off the house he shares with his teenage daughter. Past bouquets of marijuana drying like a canopy over the guest bed, he enters his garage.

"Over there, I fold my laundry," he says. "There's my washer-dryer, and over here, I have my pot plants."

The garage is a jungle of marijuana plants growing year-round, under emerald green grow lights.

"It's unlimited plants, unlimited number of lights. It's as much as you can cram into a 10-by-10 room or 100-square-feet of canopy," says Mr. Green. "If you stand above it and look down, it looks like a sea of green."

Mr. Green has a California 215 card, which he says lets him grow his own medicinal marijuana. The 46-year-old carpenter claims he uses pot to relieve back pain. But he hints that he also has buyers in Southern California.

And Mr. Green has plenty of marijuana. He has two other grow houses just like this. He claims, with more than a few chuckles, that the three houses provide him with a year's supply of medical marijuana.

"I grow as much as I can consume in a year," he says smiling. "That's my story, and I'm sticking to it."

But even in Humboldt County, where the pot business is routine, authorities still occasionally go looking for illegal growers.

On Tuesday's All Things Considered, Del Barco reports on the hunt for marijuana in California forests and private timberlands in Humboldt.