Accessibility links
Brazil Pins Hopes On Massive, Untapped Oil Fields The discovery of several massive oil fields in Brazil has put a spotlight on a company little known outside petroleum circles: state-owned Petrobras, which is now gearing up to pump as much oil as it can. Brazil hopes to be a major oil player once these fields are in full production. 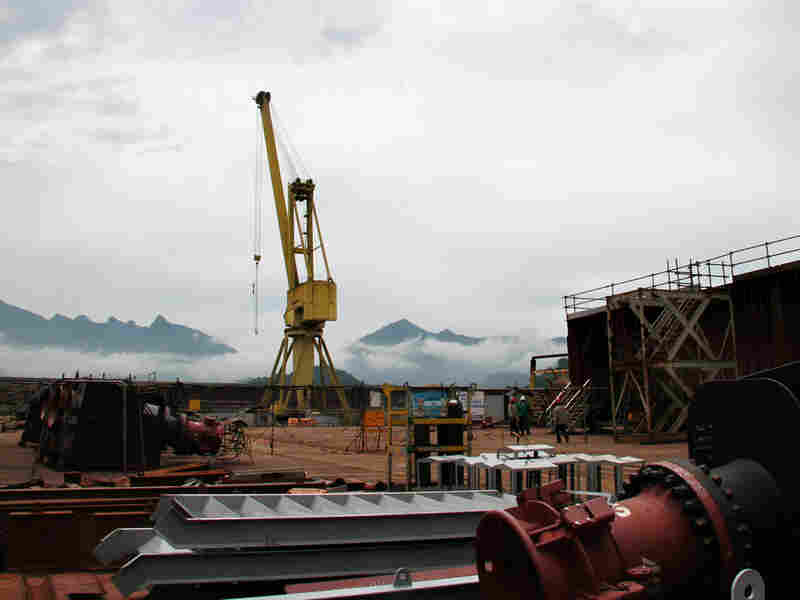 Enormous oil production platforms, incorporating approximately 50,000 tons of steel, are being built by state-owned Petrobras at this shipyard in Angra Dos Reis, Brazil. Upon completion, they will be capable of producing 180,000 barrels of crude oil per day. Peter Breslow/NPR hide caption

Enormous oil production platforms, incorporating approximately 50,000 tons of steel, are being built by state-owned Petrobras at this shipyard in Angra Dos Reis, Brazil. Upon completion, they will be capable of producing 180,000 barrels of crude oil per day.

Every few years, the global search for oil yields what's called an "elephant field" — a pool of oil believed to hold a billion barrels or more. Brazil says it's found several such fields that, once in full production, will make the South American country a major oil player.

Those discoveries have shined a spotlight on a company little known outside petroleum circles: Brazil's state-owned Petrobras, which is now gearing up to pump as much oil as it can.

To drill for its version of El Dorado, Brazil is going to have to go far and deep — 200 miles out into the Atlantic, more than 4 miles down, through swirling seas, rock and a thick cap of salt.

The only way to go after the oil is to build a fleet of floating production platforms and drilling rigs. The construction is taking place in a half-dozen Brazilian shipyards.

Roberto Moro oversees some of the building at the vast shipyard at Angra Dos Reis. A mechanical engineer, he began working at Petrobras nearly 30 years ago, when it was little more than a trading company.

"Petrobras became an international player in the market of oil and gas. Of course, we are very proud of this. Now, we are going to increase the oil production to be oil exporters. This is very important to the country," Moro says.

What Petrobras is doing at Angra is part of an ambitious undertaking, the initial phase of a $174 billion, five-year spending plan.

At Angra, framed by the blue Atlantic and a horseshoe of lush, green hills, 4,000 men build colossal, billion-dollar production platforms. The hulls alone weigh 12,000 tons. They are as tall as a 10-story building and as wide as a football field. Once completed, they will each pump 180,000 barrels of crude a day.

Then in 2006, Petrobras found Tupi — a pool with up to 8 billion barrels. Other fields in the pre-salt reservoir — so called because the crude lies beneath 6,500 feet of salt — may add billions more.

All this has investors starry-eyed.

Though Petrobras is state-controlled, one-third of its stock — among the most heavily traded on the New York Stock Exchange — is in foreign hands. 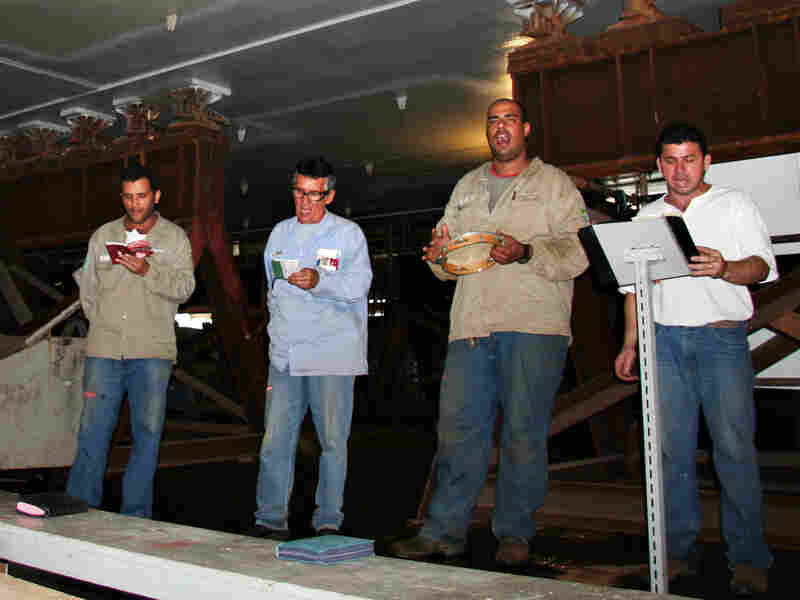 Workers at the Angra shipyard take time during a midday break to pray. They express optimism about Petrobras' future. Peter Breslow/NPR hide caption 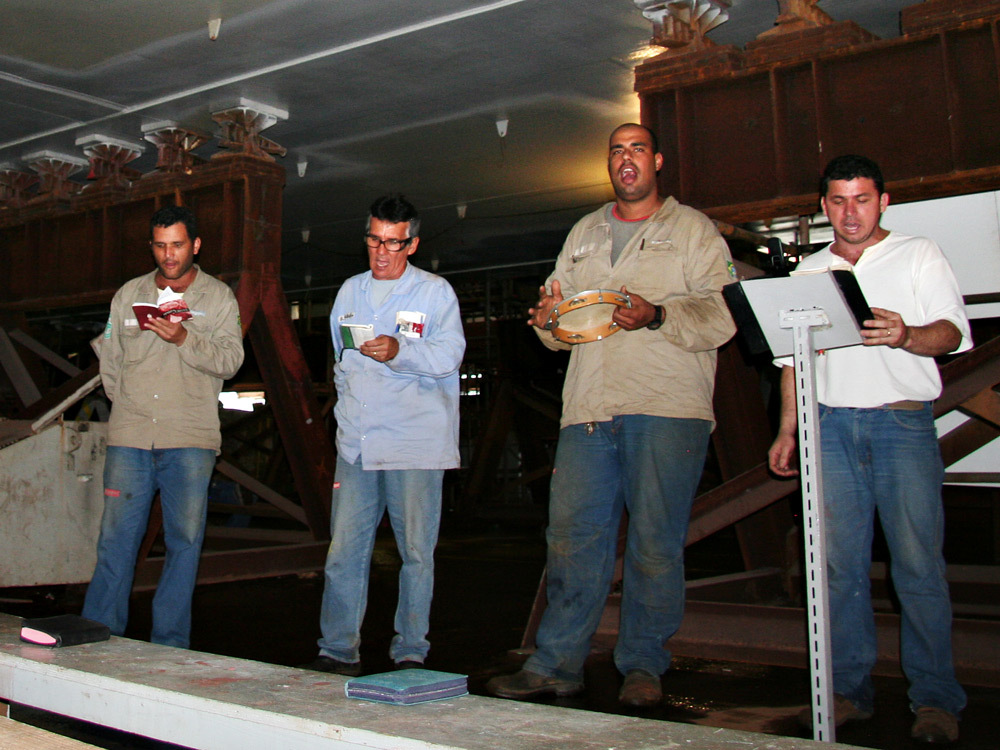 Workers at the Angra shipyard take time during a midday break to pray. They express optimism about Petrobras' future.

According to Gabrielli, Petrobras is the world's fifth-largest company, in all sectors, with market capital of $208 billion.

Of course, oil companies tend to be big. But Petrobras stands out in another way with its proficiency in deep-sea production. Gabrielli says the company has 22 percent of worldwide deep sea operations, more than any other company.

Oil experts don't dispute Petrobras' expertise. But some question a government plan that would give Petrobras exclusive rights to be the lead operator in all the new fields.

"We believe it's not good for Petrobras as a whole, because Petrobras would be obligated to be the operator in areas with high risk," he says.

De Luca says the oil fields slated for development are so big that Petrobras should focus exclusively on its most promising prospects — giant fields such as Tupi, with up to 8 billion barrels of potential oil reserves, and Yara, with up to 6 billion.

"Petrobras should be concentrated in those areas, and not in all the other areas," De Luca says.

Back at the Angra shipyard, the sound of welding is music to Ivan Celso Goncalves de Brito's ears. The 59-year-old has worked on shipyards for decades, but never on a project quite like this. He says the progress at the yard is great and that, in his opinion, Petrobras is on its way to becoming the world's largest oil producer.

Just a few feet away, a group of workers in oily work shirts and jeans take a break. They clasp hands and sing. They're in a prayer group. Like all the other yard workers here, they're optimistic about the future.

But that doesn't mean they aren't prepared to ask a higher power for help. Everyone knows the success of their mission at Angra is vital for Brazil.