Accessibility links
Tortilla Machine Maker Is Starving For Credit In California's San Gabriel Valley, Chip Masters, a company that assembles tortilla-making machines, has reduced its employees from 55 to nine to make ends meet. The company has also changed its business model and now repairs machines in addition to building new ones. 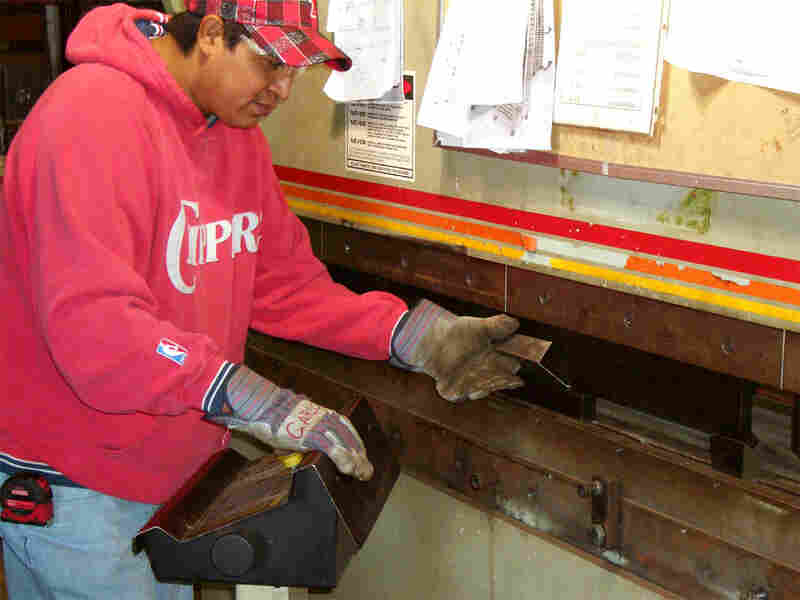 Carlos Chavez cuts sheet metal to repair a tortilla-making machine. Chavez is one of the few remaining employees at Chip Masters. Earlier this year, he agreed to reduce his hours to keep his job. Rob Schmitz for NPR hide caption 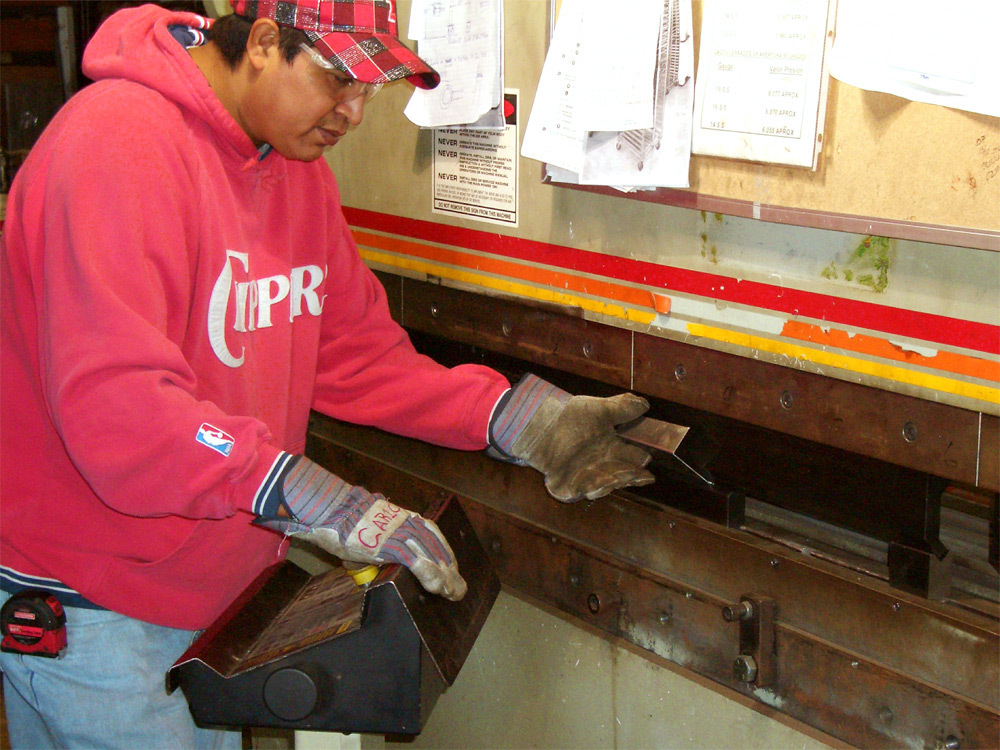 Carlos Chavez cuts sheet metal to repair a tortilla-making machine. Chavez is one of the few remaining employees at Chip Masters. Earlier this year, he agreed to reduce his hours to keep his job.

Ceja and his father, Alberto, own Chip Masters Inc., a company that assembles tortilla-making machines. Albert Ceja says he has never seen an economy this bad.

Last year at this time, they managed 55 full-time employees.

Today, the nine workers left are trying to keep busy inside this lonely machine shop in a gritty corner of the San Gabriel Valley, a metropolitan area east of Los Angeles.

Chip Masters' tortilla machines cost up to $3 million each. Not too long ago, his crew made 17 a year. This year, he's only made one.

Orders dropped off in 2008, when the credit crunch brought lending to a halt. Ceja's clients couldn't get loans to buy his equipment.

In what seemed like an instant, Ceja's cash flow was gone, and his employees were left with nothing to do.

At first, Ceja asked his workers to paint the building, move machinery around and do anything to keep busy.

After a month or so, it was clear he had to lay off employees who were as close to him as family.

As for those who remained, Ceja said he told them that there would be days when paychecks might come in a couple of days late. "And these guys understood; they were the troupers, the guys that stood in, the guys that really look out for the company," he says.

One of the remaining employees is Carlos Chavez. He now cuts sheet metal for a repair job as part of his boss' new business strategy of repairing machines, not just building them.

With an unemployed wife and three children, Chavez agreed to cut back on his hours so he could hold on to his job. "Many of my friends and family don't have any work at all," he says. "I've got a little work here, but at least I've got something. I'm lucky compared to most."

Ceja has had no luck getting a loan to keep his company going. He says he has approached eight different lenders to try to secure a line of credit. They all turned him down. His credit score, damaged by the lack of cash flow, was too low.

He also approached the Small Business Administration with no success.

Ceja wrote letters to the city and state, members of Congress and even President Obama asking for help. Other than a form letter or two, hardly anyone responded.

On the wall of Ceja's office, there's a framed photo of himself wearing a crisp military uniform.

"I was a damn good Marine, "Ceja says. "I'm an American. I love being American and I had a lot of faith in my country. And I thought, well, the government has to have prepared for this, for something like this, and it was just like a weird, deluded dream."

Not too long ago, Ceja contacted Los Angeles County, which sent a small-business outreach worker to his office to help him secure a loan. He told her he still had faith in his country.

Ceja also has faith in his ability to keep his company going. Lately, he has been reading books about Kaizen, the renowned Japanese strategy for lean manufacturing. When the economy picks up, he says, he'll be ready.