Accessibility links
In China, AIDS Stigma Proves Difficult To Eliminate China has managed to slow the spread of HIV/AIDS, but dealing with deep-rooted social stigma is proving much harder. A new report by the UNAIDS program says that 42 percent of AIDS sufferers in China have experienced discrimination because of their condition. World AIDS Day is held annually on Dec. 1 to raise awareness about the disease. 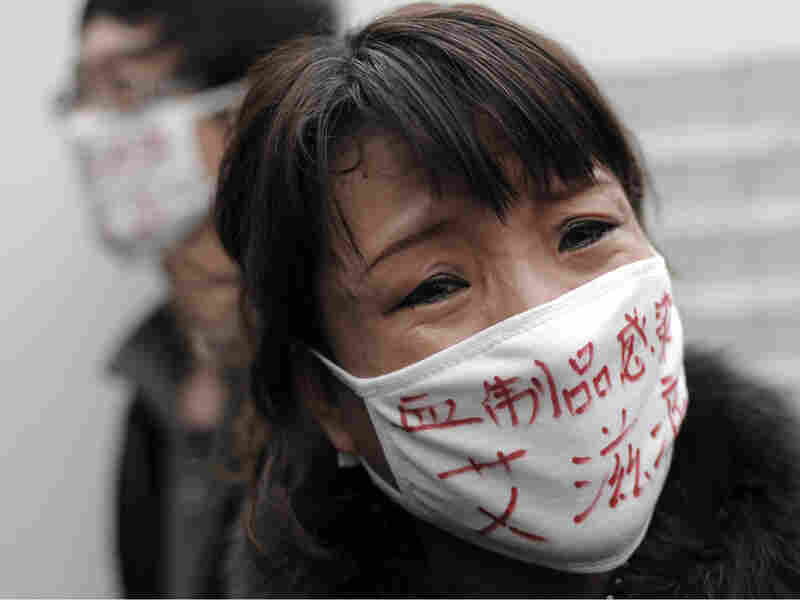 A woman whose son has HIV cries during an AIDS awareness event Tuesday, World AIDS Day, held at Beijing's south railway station. A new report by UNAIDS says 42 percent of AIDS sufferers in China have experienced discrimination because of their condition. Andy Wong/AP hide caption 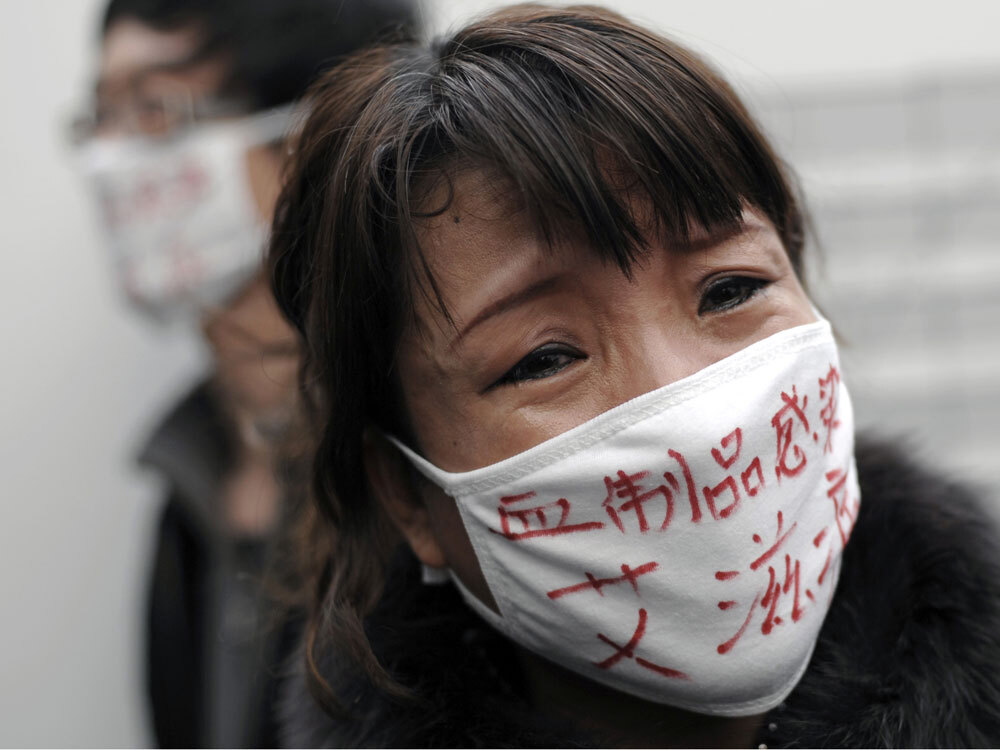 A woman whose son has HIV cries during an AIDS awareness event Tuesday, World AIDS Day, held at Beijing's south railway station. A new report by UNAIDS says 42 percent of AIDS sufferers in China have experienced discrimination because of their condition.

A new report by the UNAIDS program says that 42 percent of AIDS sufferers in China have experienced discrimination because of their condition. Last year, AIDS became the country's most deadly infectious disease. China has managed to slow the disease's spread, but dealing with deep-rooted social stigma is proving much harder.

On a recent day outside a Health Ministry complaint center in Beijing, three dozen AIDS patients shivered in the cold. They came to protest discrimination and official negligence in their home province of Henan.

One of them, 41-year-old farmer Sun Laomo, contracted HIV in 1994 while selling his blood at a collection station run by the local government. He believes he got the virus because the collection station used unsanitary procedures. He said that back home, the stigma facing AIDS patients is so great that it enforces a fearful silence.

"Nobody dares tell anyone about this disease. If locals find out about it, there's no way for your kids to live in the village," Sun said.

Gao Guoqiang said he became infected during an operation when the hospital gave him a transfusion of tainted blood. But he said that where he comes from, many believe AIDS is the result of sexual permissiveness.

"In the countryside, many people who discriminate against you think that you got this disease because your lifestyle and your morals are bad," Gao said.

Farmer Chang Qing also got HIV when selling his blood, back in 1998. He only found out last year that he had been infected. Now, the government is supplying him with medication. He said that upon arriving in the capital, local police did not make him feel welcome.

"You should've seen those policemen's attitude. We recorded it all with our cell phones. They said, 'Go jump off that building and die. Not this building, that one,' " Chang said.

At a recent news conference with the Joint United Nations Program on HIV/AIDS, Vice Minister of Health Huang Jiefu said that the government had basically solved the problem of HIV being transmitted through the sale of tainted blood. He said that the ministry was working to help AIDS patients who came to Beijing complaining of discrimination at the local level.

"We make the people's demands our first priority. As long as the problems they describe are real, we will resolve them. And if officials fail to execute their responsibilities, they will be punished according to our policies," Huang said.

The news conference showed posters featuring Houston Rockets center Yao Ming, who has used his fame in his native China to speak out against discrimination against those with the disease, and public service videos designed to dispel popular misconceptions about AIDS.

"Actually, you can't get AIDS from mosquito bites or by shaking hands with, hugging or eating with someone infected with AIDS," the narrator says in one video.

At the conference, UNAIDS released its first report ever on HIV/AIDS-related social stigma in China. It said that 15 percent of those surveyed had been refused employment, and 20 percent had faced violations of their individual rights — such as coercive HIV testing — because of their HIV status.

"The report is showing that almost 10 percent of the people who have been detected with HIV/AIDS were not having access to services because of stigma and discrimination, because medical staff were not ready to just interact with those people," Sidibe said.

Huang, the health vice minister, said that erasing social stigma would not be easy.

"China's land is vast, and has great differences in local cultures, traditions and customs. So it will take a long time to raise levels of understanding among all the people and thoroughly eliminate discrimination toward AIDS patients," he said.

Huang also noted that China temporarily lifted its ban on people with HIV/AIDS entering the country for last year's Beijing Olympics. He said he hoped that this could become a permanent arrangement, but that this matter was not entirely up to the Health Ministry.