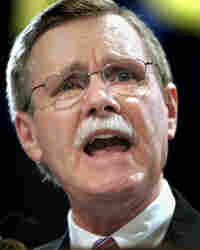 Right now, Ron Gettelfinger may have the hardest job in American labor. He runs the United Auto Workers. And on Friday, he kicks off the toughest contract talks in the union's history.

The Detroit Three — Ford, General Motors and Chrysler — are fighting for their lives and will be pushing for big concessions.

Some of Gettelfinger's predecessors treated the car companies with bombast and threats, but Gettelfinger is known more for working with management.

That may prove critical as the union tries to play a weak hand in dangerous times.

A History of Pragmatism

Gettelfinger emerged as a rising star in the union by working in partnership with Ford in the early 1980s. He was head of the bargaining committee at a truck plant in Louisville, Ky. The plant was suffering from foreign competition and listed to close. John Calhoun Wells, who was Kentucky's labor secretary at the time, says that instead of railing against the company, Gettelfinger went to work making changes in the plant and improving the product.

"Ron led over 100 separate meetings within the plant," Wells recalled. He says Gettelfinger told workers, "'Look, this plant is going to be gone if we don't make some changes.'"

The plant survived and, according to Wells, became one of the strongest at Ford.

Wells says Gettelfinger brings a needed sense of realism as the union bargains with companies staring into the abyss.

"I think his leadership is going to be absolutely essential, really, for the survival of the American auto industry," says Wells, who also headed federal labor mediation under President Clinton.

Gettelfinger's background isn't typical of a UAW leader. While he was working full time, he also studied accounting at Indiana University. He wanted a better understanding of the companies on the other side of the negotiating table.

Gerald Meyers, the former chairman of American Motors, says Gettelfinger has a better feel for business than some of his predecessors and is especially well informed. Meyers recalls that when Ford and GM complained about financial problems, Gettelfinger did something unusual by UAW standards.

"He brought in ... an investment banking firm to give him some assistance, look at the books," Meyers says. "That's the sign of a sophisticated person."

Gettelfinger doesn't come off as a stereotypical union boss, either. A trim 62-year-old, he doesn't travel with an entourage, and he brings his wife, Judy, to out-of-town meetings. Instead of being chauffeured about, he drives himself.

"I think he's different than most autoworkers, including myself," says Douglas Fraser, a former union president who has known Gettelfinger since the 1980s. "He doesn't drink. He doesn't smoke. His lifestyle is much stricter."

Gettelfinger rarely speaks to reporters and refused to talk to NPR. He prefers a friendly Detroit radio talk show where his views go unchallenged. Colleagues insist he can be warm and funny, but Meyers and others say Gettelfinger is all business.

"I don't think he enjoys people," says Meyers, who has had Gettelfinger speak to his MBA students at the University of Michigan. "I can't imagine him telling a joke. I can't visualize him being light-hearted."

Instead, the word that keeps coming up when you talk about Gettelfinger is pragmatic. Consider the way he switched positions on the recent agreement to sell Chrysler. When private-equity firms were looking to purchase Chrysler, he described them in a speech in February as the business equivalent of "chop shops."

"Many of them are out to increase their wealth by stripping and flipping their companies," he told union members.

Then, when Cerberus, a private-equity company, agreed to buy Chrysler three months later, Gettelfinger surprised everyone and backed the deal. He said he got assurances that the new company wouldn't cut more jobs; he explained his change of heart at a news conference.

"You're dealt a hand," he said. "We would have preferred that the Chrysler Group stay under the umbrella of Daimler. But that's not going to happen."

When a reporter pressed him on whether he had flip-flopped, Gettelfinger grew testy.

"I thought I answered that question," he snapped, adding, "Are you late?"

Some Chrysler workers were disappointed with Gettelfinger's reversal and are still worried about what a private-equity company will do to the automaker.

Mike Parker is an electrician at a Chrysler plant in the Detroit suburbs that makes the Sebring. He wants Gettelfinger and union leaders to fight concessions during talks this summer. Parker says if leaders keep giving up workers' benefits, they undermine the union's very reason to exist.

"I think the message it will send to workers is that the union does not represent them against their bosses," Parker says. Instead, he thinks, workers will see the union as "just another boss, or another institution to which they have to pay dues. And why should they bother?"

But with all three major U.S. automakers struggling, Gettelfinger is expected to make some concessions. His challenge: giving up just enough to help the Detroit Three become profitable again, but not so much that his own members vote down the contract.