Accessibility links
Suspect In Police Shootings Shot Dead A day-and-a-half-long manhunt came to an end early Tuesday in Seattle when a police officer shot and killed the suspect in Sunday's killings of four police officers near Tacoma, Wash. Police say more arrests are likely in the case.

A day-and-a-half-long manhunt came to an end early Tuesday in Seattle when a police officer shot and killed the suspect in Sunday's killings of four police officers near Tacoma, Wash. Police say more arrests are likely in the case.

In Tacoma, Washington this afternoon, prosecutors are preparing to charge a number of people they believe provided assistance to an accused cop killer. Maurice Clemmons evaded authorities for more than a day after he allegedly ambushed and killed four police officers on Sunday. Early this morning he was shot to death by a Seattle policeman.

NPRs Martin Kaste has the latest.

Mr. NICK METZ (Assistant Police Chief): This was a situation where the officer just was simply checking out a suspicious vehicle, realizing it was stolen and was just taking the actions that any officer would take and then noticed the subject coming up from behind him.

KASTE: Metz says when the patrolman ordered Clemmons to show his hands, Clemmons refused and ran. The officer shot him to death. Police say Clemmons was armed with a gun taken from one of the four Lakewood officers killed on Sunday. Less than three hours later, still well before sunrise, Lakewood Police Chief Bret Farrar stood close to the spot where Clemmons was shot, now cordoned off with police tape, and thanked his colleagues from other departments.

KASTE: On police scanners, officers could be heard criss crossing Seattle, following any tip that might lead to Clemmons.

Unidentified Man: Oh, we got a lot of blood up here in the park.

KASTE: Blood trails were a special interest because investigators believed Clemmons had been wounded by one of the officers during the attack. Pierce County sheriffs spokesman Ed Troyer says now that investigators have seen Clemmons body, they know they were right about that.

Mr. ED TROYER (Spokesman, Pierce County Sheriff Office): The wound was severe. In fact, after looking at the wound where he was shot and the job the Lakewood officer did, Im surprised he survived it.

KASTE: He says Clemmons had an amateurish bandage on the wound. Police and prosecutors are now turning their attention to people they say helped Clemmons while he was on the run.

Mr. TROYER: Some are friends, some are acquaintances, some are partners in crime and some are relatives.

KASTE: Already this afternoon, prosecutors have begun the process of charging those friends and relatives, some of whom are in custody. As to Clemmons, its still not clear what his motive might have been. Investigators say he might've been angry about the multiple felony charges he was facing. But at least one family member has come forward to say Clemmons had gone insane. 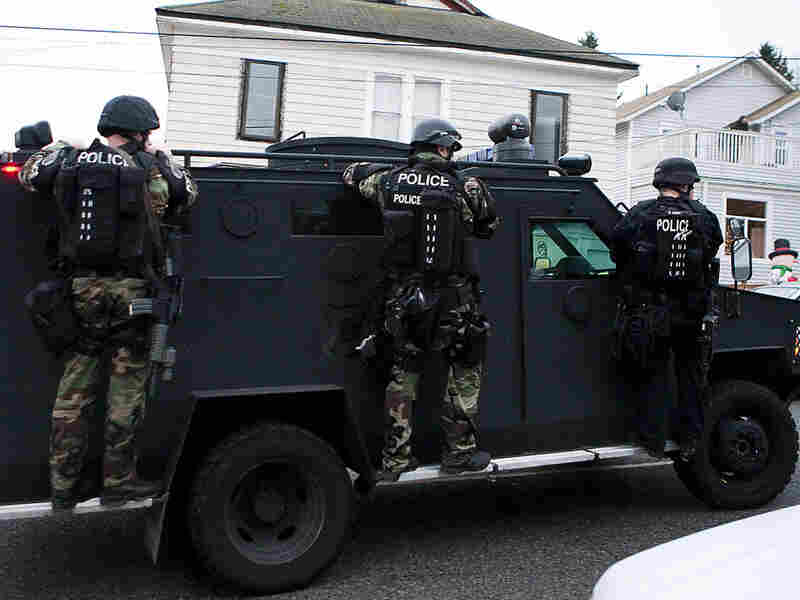 A Seattle police SWAT vehicle on Monday leaves the scene of a search for Maurice Clemmons, who was shot and killed by police early Tuesday in a south Seattle neighborhood. Stephen Brashear/Getty Images hide caption 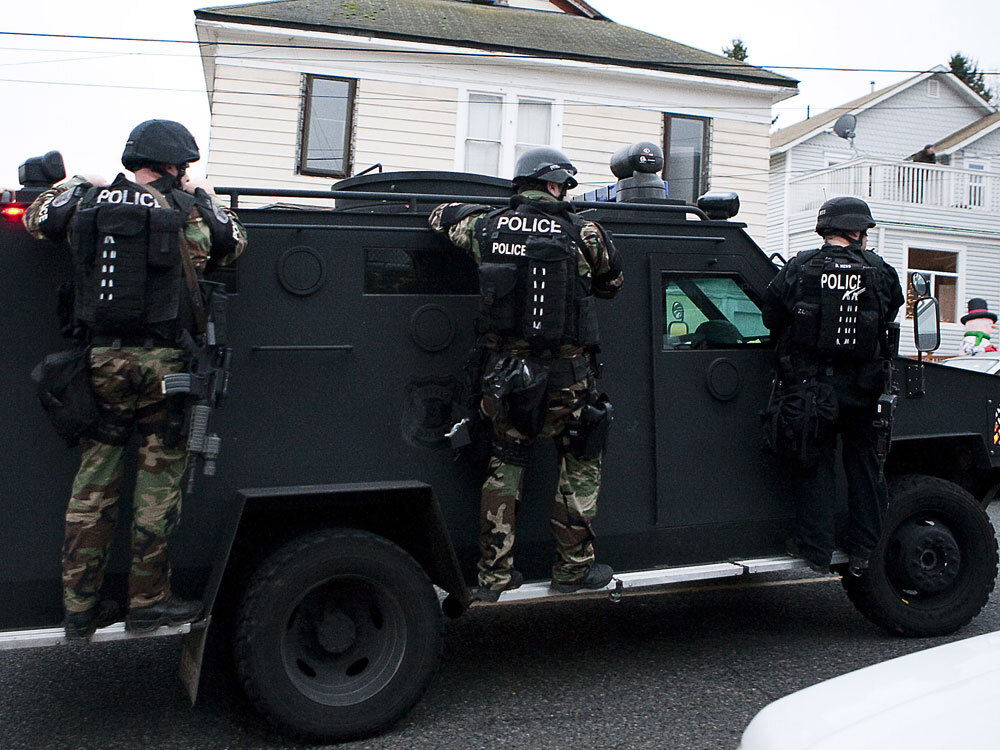 A Seattle police SWAT vehicle on Monday leaves the scene of a search for Maurice Clemmons, who was shot and killed by police early Tuesday in a south Seattle neighborhood.

The man authorities say gunned down four police officers over the weekend was shot and killed Tuesday in Seattle by a lone patrolman investigating a stolen car.

Maurice Clemmons had been the target of a massive manhunt after he allegedly carried out the execution-style murders in a coffee shop Sunday. On Monday, authorities thought they had cornered him in a Seattle house but found it empty when they stormed the residence.

Police say Clemmons, 37, was carrying a handgun he took from one of the dead officers. A policeman recognized him near a stolen car in a south Seattle neighborhood at about 2:45 a.m. and ordered him to show his hands and stop, Assistant Police Chief Jim Pugel said.

Clemmons, who had already been wounded by one of the four victims in Sunday's attack, was shot and killed.

On Monday, officers detained a sister of Clemmons who allegedly "drove him up to Seattle and bandaged him up" after Sunday's attack, Troyer said.

Authorities say Clemmons singled out the Lakewood officers and spared employees and other customers at the coffee shop. He then fled after one of the dying officers shot him in the torso.

Troyer said he was "surprised that [Clemmons] managed to get away."

Maurice Clemmons is seen in this photo provided by the Pierce County Sheriff's Department.

"The officer did a good job in Lakewood," Troyer said.

After Clemmons was killed, a couple of dozen police officers milled around at the scene, shaking hands and patting each other on the back later Tuesday morning. The officer who shot Clemmons was not injured, Pugel said.

Police said they aren't sure why Clemmons shot the four officers, who were in uniform and were working on paperwork at the coffee shop just two blocks outside their jurisdiction.

"The only motive that we have is he decided he was going to go kill police officers," Troyer said. He added that Clemmons talked the night before the shooting about killing a group of cops and watching the news.

"We do not believe that the Lakewood officers were actually targeted other than that they were police officers in that location at the time where he knew he could find police officers," Troyer said.

Clemmons was described as increasingly erratic in the past few months and had been arrested earlier this year on charges that he punched a sheriff's deputy in the face.

Clemmons also had a long criminal record. As a youth, he received a 108-year prison sentence in Arkansas but had his sentence commuted by then-Gov. Mike Huckabee.

At the time, Huckabee cited Clemmons' youth in shortening the sentence. But the former presidential candidate said on Fox News Channel's The O'Reilly Factor on Monday night that Clemmons was set free because prosecutors had failed to file paperwork in time.