Accessibility links
'Sunshine' The sun's bright candle is just about burnt out — will Cillian Murphy's team of squabbling space jockeys be able to relight it in time? Wait, this is science-fiction: Don't ask too many questions, or everything may blow up. Danny Boyle's movie is a flameout, but it sure is pretty. 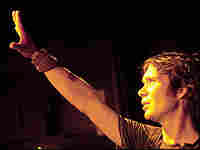 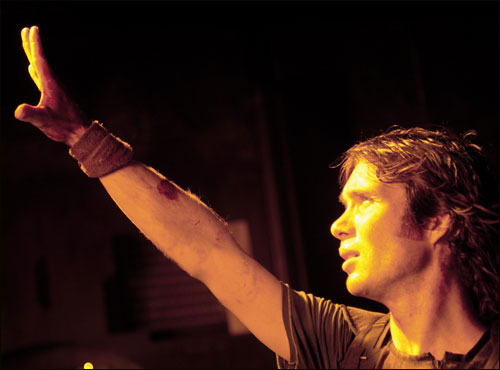 Mr. Sunshine: Cillian Murphy is the guy in charge of detonating a superweapon to jump-start the sun in Danny Boyle's new space opera.

In this stunning-to-look-at sci-fi epic, the sun's candle is sputtering out — don't ask too many questions, or the whole thing'll fall apart — and humankind, presumably after getting over its relief at the end of global warming, has decided to relight it.

So Earth has sent into space what amounts to a giant nuclear match — a craft called Icarus II that's been outfitted with nearly all of this planet's fissionable material, plus a substantial heat shield to protect it from a sun that, though much diminished, remains pretty bright.

Why is the craft called Icarus II? Well, someone at NASA has either a dark sense of humor or a spotty knowledge of Greek mythology, but there's a II because the first Icarus didn't have enough atomic phosphorus, or something.

Anyway, this second ship amounts to humanity's last shot, and it's been sent into space with a crew guaranteed to combust even if the nuclear fuel doesn't: a first mate with anger-management issues, a shrink who takes to staring at bright, shiny objects, a physicist who ... oh, never mind. Suffice it to say that this is not a team you'd entrust with the fate of your family car, let alone the fate of the world.

Still, the spectacle they're a part of is very prettily imagined in Danny Boyle's red-orange flameout of a movie. Nothing anyone does makes much sense, but gad, is it ever gorgeous.