Accessibility links
Drug Can Stop Strokes, But Most Patients Don't Get It For about one-third of stroke victims, a clot-busting drug can prevent most of the permanent damage if it's taken right away — yet most patients don't get to a hospital that can give it. Beverly Sylvia (left) had a stroke at the age of 49 but made a full recovery after receiving a clot-busting drug. 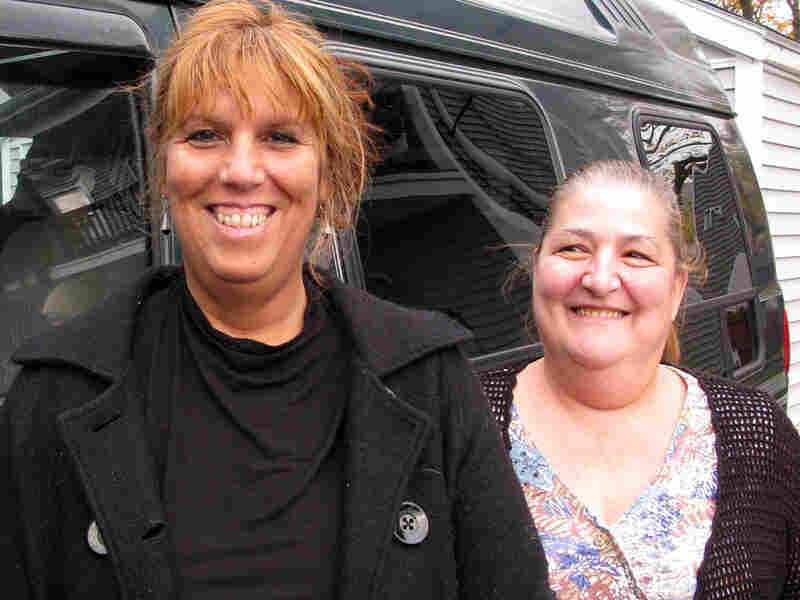 Beverly Sylvia (left) and her friend Linda Rose. Sylvia had a stroke at the age of 49 but made a full recovery after receiving the clot-busting drug t-PA. Richard Knox/NPR hide caption

Every minute-and-a-half, on average, someone in America suffers a stroke. That's 795,000 strokes a year — a big toll by any measure. Strokes are the third-ranking cause of death and the leading cause of disability. But most stroke specialists think it doesn't have to be so bad.

The vast majority of strokes are caused by a clot that blocks blood flow to part of the brain. Depending on where, victims suffer dizziness, weakness, numbness, loss of speech or other symptoms. Most of the time, the damage is permanent.

Since 1996 there's been an approved drug called t-PA (for tissue plasminogen activator) that, according to some big studies, can often break up the clot, restore blood flow and prevent much permanent damage --- if the drug is given within a few hours of symptom onset.

About a third of stroke victims are thought to be eligible to get the clot-busting drug. But fewer than 5 percent do, by some estimates. The reasons are complicated (more on that below).

Only a fraction of the nation’s 5,800 acute-care hospitals are certified as providing state-of-the-art stroke care. Use this chart to find the nearest one to you. Hospitals listed are certified by the Joint Commission, the American Stroke Association and some state health departments.

Beverly Sylvia of North Dartmouth, Mass., is among the lucky 5 percent.

She was 49 when she felt numbness in her right arm upon getting out of the bathtub. She shrugged it off as a pinched nerve and drove to her usual Tuesday evening date — shooting pool with friends.

But soon the symptoms got too severe to ignore. She couldn't swallow. Then she couldn't talk.

Sylvia's father spent the last 15 years of his life paralyzed, nearly mute and terribly depressed after a stroke. So the awful thought dawned on her that that's what was happening to her, too. Struggling to speak, she finally got the word "stroke" out.

But to her horror, her friends didn't believe her.

"They were saying, 'Oh, if you go to the hospital, they're going to do all kinds of tests. They're going to check your blood,' " Sylvia says. "And I'm thinking to myself, 'Oh, my God, they think I'm taking drugs!' It's amazing what people think, you know? It's the last thing they think, that you're having a stroke!"

Schwamm is professor of neurology at Harvard Medical School and director of the acute stroke center Massachusetts General Hospital.

Feeling desperate, Sylvia managed to fish out her cell phone and speed-dial her best friend, Linda Rose. Through her friends and a quick version of the game 20 Questions, Sylvia managed to convey that she wanted Rose to take her to St. Luke's Hospital in New Bedford, 8 miles away. It's not the closest hospital, but it's where her father was treated and where Sylvia is known.

That decision turned out to be crucial. That's because St. Luke's is one of more than two dozen New England community hospitals with a direct link to the stroke center at Massachusetts General Hospital in Boston, 75 miles away.

Sylvia got to the St. Luke's emergency department a little after 11 p.m. Within minutes, the staff assessed her symptoms and ordered a brain scan. Then, according to a routine procedure, they called Mass General.

Dr. Raphael Carandang, a stroke specialist there, promptly activated a telemedicine link. On his computer screen, he could see Sylvia on a gurney in the St. Luke's emergency department. A senior neurologist was watching from his home computer.

A clock above Sylvia's head read 11:38. That's important: There's a three-hour limit on when the clot-busting drug can be given.

Coming Back From A Stroke

Greg McGuire was the picture of a National Park ranger — until a massive stroke cut him down. Doctors told his wife, Donna, that he might not survive, much less walk or talk. But through grit and determination, they've proved the doctors wrong.

Carandang had to determine not only if Sylvia was having a stroke, but also what kind. If it's caused by a clot, she might be eligible to get the clot-busting drug. If it's a hemorrhage, she might need emergency brain surgery. The wrong decision could kill her.

With the help of the St. Luke's staff, Carandang conducted a neurologic exam: Can she speak? Raise her arms and legs? Feel pinpricks? Smile normally? He gets critical information about vital signs and lab values.

With the clock ticking, Carandang concluded that Sylvia's stroke was caused by a clot. Next, he had to figure out when her symptoms began. If the drug is given too late, that raises the risk of brain hemorrhage.

"I know you're having difficulty talking, so I'm going to give you some choices," Carandang told Sylvia. "Did this start at 5 o'clock in the evening?" She shook her head "no."

Sylvia now says she realized then that the time symptoms started was crucial. "And I was trying to say it, and it wasn't coming out!"

Carandang groaned. He realized Sylvia had to get the drug before midnight. That was less than 15 minutes away.

A Stroke In Progress

Doctors examine Beverly Sylvia, who they think is having a major stroke. They are trying to find out what time her symptoms started.

"We have to speed things up very quickly," he says now. "I was hoping she had more time."

He asked the St. Luke's nurses to start computing a dose and mixing the medicine. Then he turned to Sylvia again.

"The risk of the medicine is that it can make you bleed in your head, which could be potentially dangerous," he said. "Do you understand the risks of the medicine?" Sylvia nodded and said yes.

Lying there speechless, she recalls now, she was thinking of her father.

"I was thinking that I was just gonna go for it," she says. "Because I wasn't going to be like this, you know? I was doing everything I could not to be like that. I was going to try anything. There was no doubt."

After Sylvia gave consent, everything sped up. Just as the clock touched midnight — the three-hour deadline — nurses started t-PA flowing into her arm. Minutes later, she was aboard an ambulance for the hourlong ride to Boston.

Nurse Barbara Davis rode with her. Her job was to evaluate Sylvia's symptoms, and especially her level of consciousness, to detect any sign of brain hemorrhage — a signal to halt the t-PA drip. To do that, Davis tried to get Sylvia to talk. But the whole way, Davis says, Sylvia had a "profound speech deficit," and her muscle weakness was unchanged — until the very end.

Dr. Lee Schwamm, a professor of neurology at Harvard Medical School and director of the acute stroke center at Mass General, says Sylvia's was a "hallelujah case." She recognized the symptoms right away, got to the right hospital, got the drug on time and made a complete recovery.

Doesn't Work For Everyone

Schwamm says less than one in 10 patients who get timely t-PA has such an immediate and complete recovery. "These patients don't come by every night," he says, "but when they do, they're a real reason to rejoice."

He says his center sees "many patients like Ms. Sylvia who have had a stroke, don't get t-PA and spend several months in inpatient rehabilitation."

One landmark, federally funded study found that a little less than half of those who got the drug within a three-hour window had an excellent recovery three months later. That's compared to about a quarter of those who got a placebo, or inert substance.

Another larger and more recent European study found more than half of stroke patients who got a clot-buster had a good outcome (no or few disabilities), compared with 45 percent of placebo patients. That's a 30 percent advantage. (The European study also suggests that the deadline for giving the drug in selected patients can be safely extended to 4.5 hours.)

In other words, some stroke victims can recover well spontaneously, without incurring the risks of the clot-busting drug.

Some doctors think patients like Beverly Sylvia are just lucky, and that the t-PA she got shouldn't get the credit. Most of them tend to be emergency medicine specialists, not stroke specialists.

Dr. Jerome Hoffman of UCLA is perhaps the most prominent critic. He is an author of a recently published re-analysis of the 1995 study, conducted by the National Institute of Neurological Diseases and Stroke (NINDS), that led to the approval of t-PA for stroke.

"I believe this is at best unproven," Hoffman says. "I'm pretty sure the NINDS study shows no effect of t-PA. Even if it does, it's probably due to chance. And even if the NINDS study did show benefit, it doesn't mean they could do it that way out in the community."

"The evidence is pretty overwhelming that the benefit is there," Koroshetz says. "The data are so clear this treatment works if given in the right context, it's imperative that hospitals put it into their emergency department systems of care."

"They have to decide on a treatment that has to be given in a very short time frame, with the expertise and backup not as prevalent as it needs to be," Koroshetz says.

Telemedicine advocates like Schwamm say their telemedicine technology can come to the rescue.

"We'll always have a shortage of highly trained stroke specialists who can be available at the bedside for patients like Ms. Sylvia," he says. "We're going to have to develop strategies like telemedicine to bring them to the bedside in a virtual manner while we develop new, safer medications that can be delivered in a longer window of time."

At this point, he says, there are 18 stroke telemedicine programs across the nation based at teaching hospitals, plus some in smaller hospitals and two companies that offer video consultation by specialists on a for-profit basis.

It remains to be seen whether or how soon virtual stroke specialists can do emergency consultations for most U.S. stroke patients.

Meanwhile, here's a postscript to Sylvia's story: After her recovery, doctors did tests to determine why she had a stroke at such a young age. They found a congenital heart defect — basically a hole in her heart that allowed a clot to migrate to her brain. They snaked a catheter through her veins and closed the hole in a minor procedure.

That should reduce Sylvia's chances of having another stroke.