Accessibility links
Cargo Bikes: Riding With The Kids, And The Kitchen Sink More Americans are riding bikes to commute. But the need to carry a child, or groceries, can make things complicated. Enter the cargo bike, a long, sturdy cycle that is gaining new popularity in bike-friendly cities like Portland, Ore. 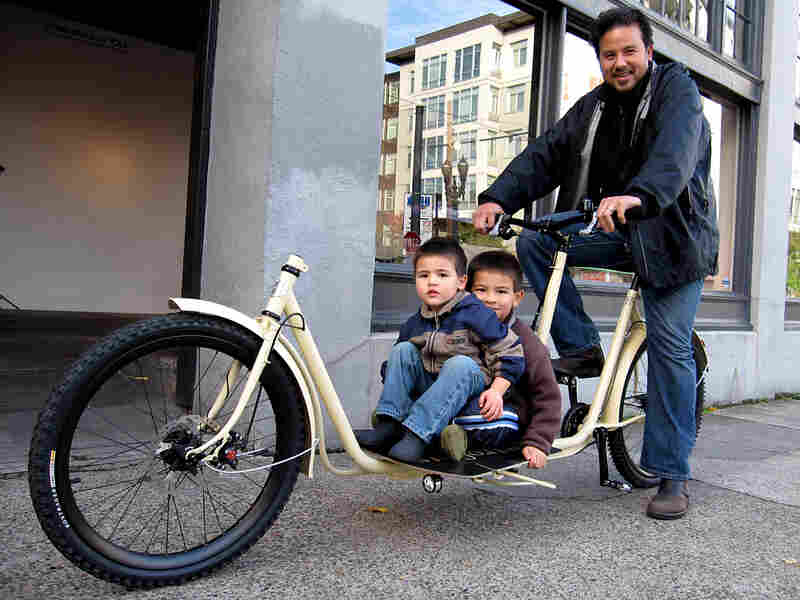 A Million And One Uses: A cyclist and two boys take one of Metrofiets' cargo bikes for a spin in Portland. Curtis "Corky" Miller hide caption 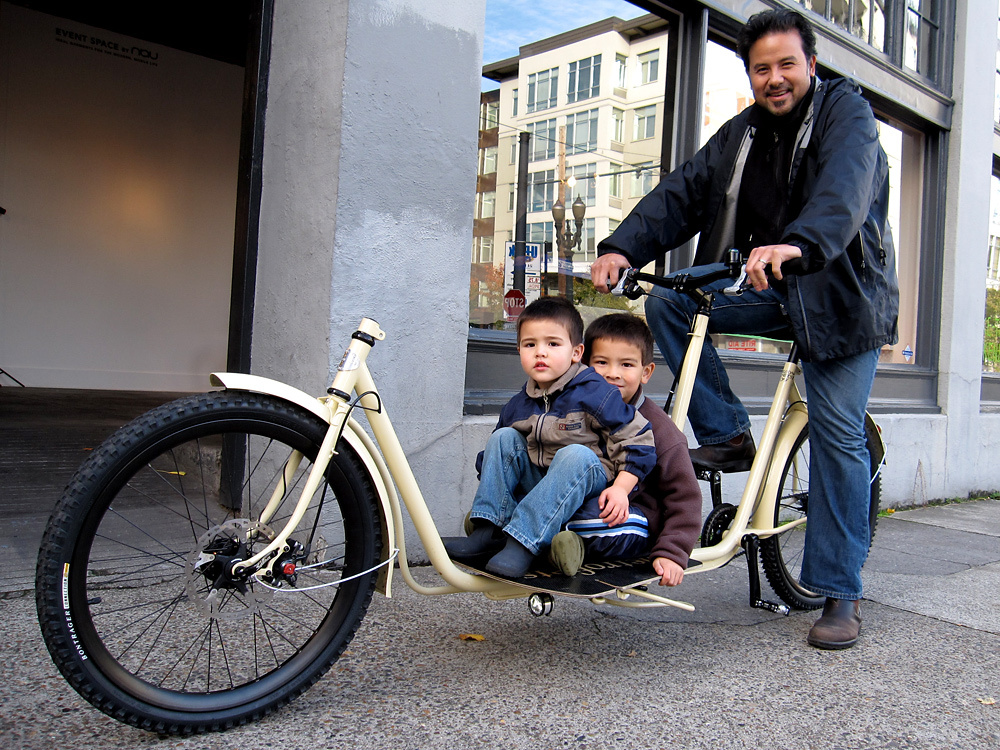 A Million And One Uses: A cyclist and two boys take one of Metrofiets' cargo bikes for a spin in Portland.

Picture a vehicle that can carry around your kids and groceries efficiently, and doesn't burn any fossil fuels. But there's one drawback: You have to pedal it yourself.

Cargo bicycles are specially designed bikes that can haul several hundred pounds. Long popular in Europe, they're starting to make their way into the United States.

On a recent afternoon in Portland, Ore., Carie Weisenbach-Folz picked up her two kids, ages 5 and 2, from school. But instead of loading them into the usual minivan, she's using a cargo bicycle.

Between the handlebars and front wheel, there's a stylized wheelbarrow-type box, with a sturdy see-through cover. Bicycles like this can cost a lot — over $3,000.

"Random people walk up to me at the grocery store" to ask her how much her bike cost, says Weisenbach-Folz.

Weisenbach-Folz bought her bike at Clever Cycles, a shop specializing in utility bikes that can carry a load.

Asked what kind of cargo people are looking to haul, store owner Todd Fahrner said "children, and groceries. Families are probably 70 percent of our customers."

Most cargo bikes are made overseas, in Europe or China. But in recent years, a few manufacturers have sprung up in the United States — including one in northeast Portland.

Philip Ross and Jamie Nichols started turning out bikes for their company, Metrofiets, about a year ago. They were inspired by European models, but adapted the design to make it easier to tackle the hills of Portland. 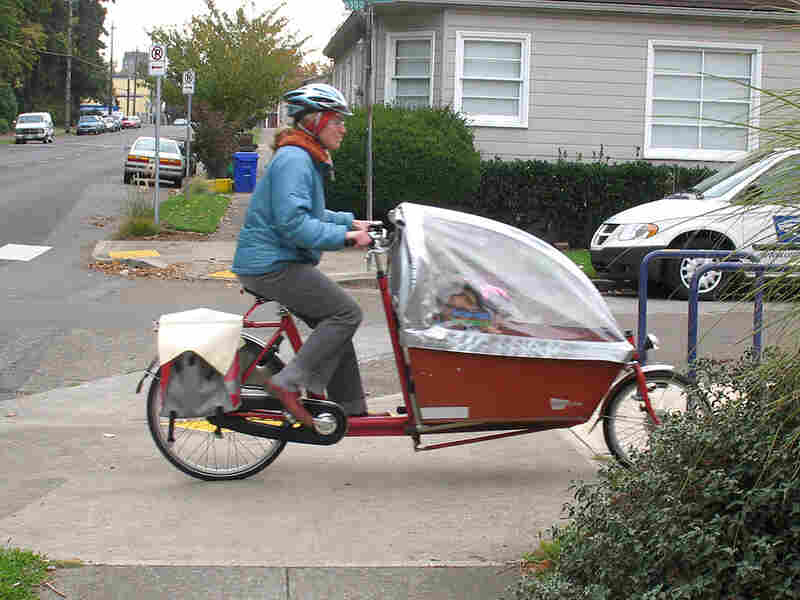 Carie Weisenbach-Folz (with children Cody and Ada Jean) pull up to their house after a bike ride home from school. Deena Prichep for NPR hide caption 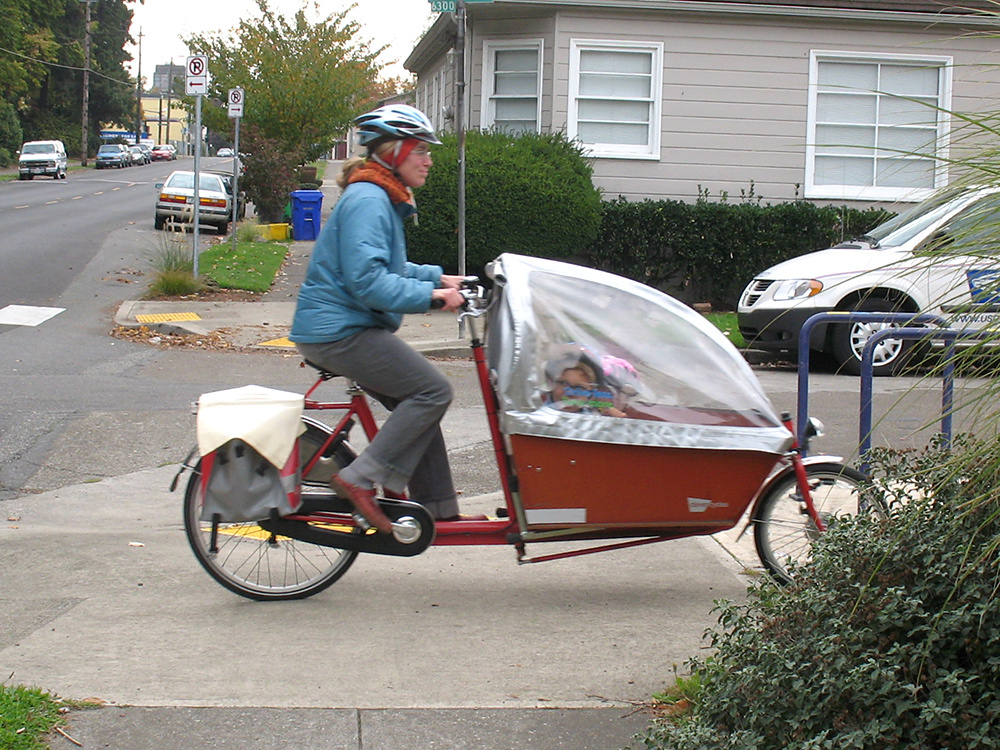 Carie Weisenbach-Folz (with children Cody and Ada Jean) pull up to their house after a bike ride home from school.

"It has a slightly different geometry," Ross said. "And we were able to shave off about 30 pounds from the frame, without affecting the amount of weight we could carry."

Their workshop is pretty small, with a waiting list of nearly a year for a bike. And the bulk of Metrofiets' customers aren't families — they're businesses.

"They can absolutely get rid of one of their fleet vehicles, and use one of these bikes, within a certain geographical area around their shop or business," Ross said.

Metrofiets has built a custom cargo bicycle for a floor refinisher to carry his sander, and another for a brewery to transport their beer kegs. And they're not the only ones predicting a rise in business cargo biking.

"The urban freight issue is one where I think cycling has a huge role to play, and which at the moment is really relatively untapped," said Andy Clarke, head of the League of American Bicyclists.

Clarke predicts that bicycle commuting will continue to rise, as well. Today, more than 750,000 Americans bike to work. That may seem like a small number, but it's an almost 50 percent jump since the 2000 census.

But it's not always so simple, according to Cotten Seiler, who teaches American studies at Dickinson College. Seiler, who wrote a book about American society's relationship with driving, says that how Americans use cars is about more than just a rational weighing of the pros and cons.

"It's highly emotional, it's psychologically charged, and it gives us a sense of identity," Seiler said. "The utilitarian choice about how to get from point A to point B is often obscured by all of these other emotional and psychological resonances that cars have for us."

Seiler sees Americans starting to let go of some of these attachments to their cars. He says it can be an uphill battle, especially in cities that don't have the density or infrastructure to support cycling.

But in bike-friendly cities like Portland, bike builders and riders are hoping that the cargo bicycle can become the new minivan.