Accessibility links
Thompson on Heels of Frontrunners, Adviser Says Ken Khachigian, senior adviser to Fred Thompson's exploratory presidential campaign, says Thompson has caught up with top GOP candidates in fundraising. It helps that Americans have some comfort and familiarity with Thompson, he tells Michele Norris. 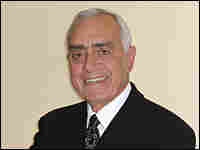 Ken Khachigian, a veteran of nine presidential campaigns, is a senior adviser to Fred Thompson, who has yet to declare his candidacy. Courtesy Ken Khachigian hide caption

Ken Khachigian, senior adviser to Fred Thompson's exploratory presidential campaign, says that despite Thompson's late entry into the race, he has already caught up with other top candidates, and without spending very much money.

In the second story in NPR's series of conversations with people behind the candidates, Khachigian also tells Michele Norris that, while personality alone can't win an election, it helps that Americans already have a certain level of comfort and familiarity with Thompson.

Khachigian, a veteran of nine presidential campaigns, says a Thompson announcement is likely to come within weeks, not months. 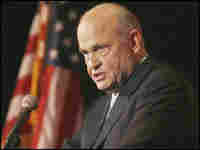