Accessibility links
Illegal Dogfighting Rings Thrive in U.S. Cities The secretive and bloody industry is booming around the country, enjoying underground popularity despite being banned in all 50 states.

From ancient Rome to post-Taliban Afghanistan, a savage sport thrives despite attempts to outlaw it.

Read a history of dogfighting.

This week's indictment of Atlanta Falcons star quarterback Michael Vick on charges tied to dogfighting has brought attention to what activists and law-enforcement agencies say is an increasingly popular, savage underground culture.

Federal investigators say Vick's Virginia estate, where 66 live dogs and the remains of seven were seized in April, was used as a dogfighting kennel and combat arena. The 18-page indictment alleges that Vick and his partners ran a brutal fighting ring, where losing dogs were often killed in the ring or executed by hanging, drowning or electrocution.

Vick's case is shining a spotlight on a bloody industry that is thriving in urban areas and the rural South — despite being outlawed in all 50 states.

In the Ring, Under the Law

In the brutal and secretive world of professional dogfighting, pit bulls are placed in a ring and goaded and cheered by their owners and the crowd while they tear at each other's faces and throats.

The practice is a felony in 48 states, but for years, the secretive network of trainers, breeders and owners have managed to avoid scrutiny from law enforcement.

In recent months, however, high-profile busts of suspected dogfighting kennels in Illinois, Texas, Virginia and Ohio have shed light on its resurgence.

John Goodwin, a dogfighting investigator with the Humane Society, works regularly with law-enforcement agencies on some of the country's most harrowing cases.

He says that during a dogfighting raid in March, investigators found a female pit bull with the entire lower half of her jaw broken off.

In some cities, Goodwin says, the number of pit bulls turning up at animal shelters with scars and fight wounds has risen tenfold.

"Up until 10 or 15 years ago, this was pretty much an entirely rural activity," Goodwin says. "Now, there's still a lot of dog fighters in the rural areas, but they've kind of been overtaken by an urban crowd."

Goodwin blames dogfighting's latest vogue on pop culture icons, including pro-athletes like Vick and hip-hop artists like Jay-Z and DMX, who've made pit bulls a part of their rebel image.

High-profile investigations are putting more pressure on dogfighters, but in some parts of the country, the illegal contests still enjoy a remarkable level of cultural acceptance.

In small towns where dogfighting is a tradition, Corenfield says top trainers and breeders are established members of the community.

"There's high-rollers, like real high-rollers, where you know they're doing it. It's so hard to prove, though," Corenfield says. "If we could get some money to get someone in there undercover, we could bust them. But you know there's not the money or the manpower."

Despite the savagery of dogfighting, a public debate continues over the seriousness of the crime. In Idaho and Wyoming, staging a battle is still only a misdemeanor.

In Texas, where dogfighting is a felony, stiffer prison sentences have triggered controversy. In the spring, Congress debated new federal legislation banning interstate trafficking of fighting dogs and roosters; of the 32 representatives who voted against the bill, 11 were from Texas.

Most of the bill's opponents say they aren't fans of dogfighting but are conservative, pro-life Republicans. Iowa Rep. Steve King from Iowa says it's wrong for the federal government criminalize pit bull trafficking while allowing legal abortion.

"My vote says that human life needs to be elevated and stay above animal life. And I think it devalues all human life, when you set the life of an animal up above that of a human," King says.

But most Republicans — along with more than 500 law-enforcement agencies — did endorse the bill, which President Bush signed into law in May.

The thousands of fighting dogs recovered every year in the U.S. are kept alive only as long as they're needed for evidence, but they can never be adopted out as normal pets.

"They're unsociable, they're extremely dog-aggressive," Harkness says. "It would be a liability to people if one of these animals were to attack a child, which has happened in Houston. They will be euthanized." 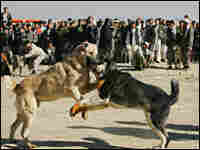