Accessibility links
Two Brothers, Measured Against One Another By Fate Before Sam (Tobey Maguire) goes off to war, he and his brother Tommy (Jake Gyllenhaal) live different lives. When Sam is reported lost in a helicopter crash, though, both men find their character tested — and director Jim Sheridan takes his time tracking the nuances, so that when emotional fireworks finally come, they're honestly explosive. 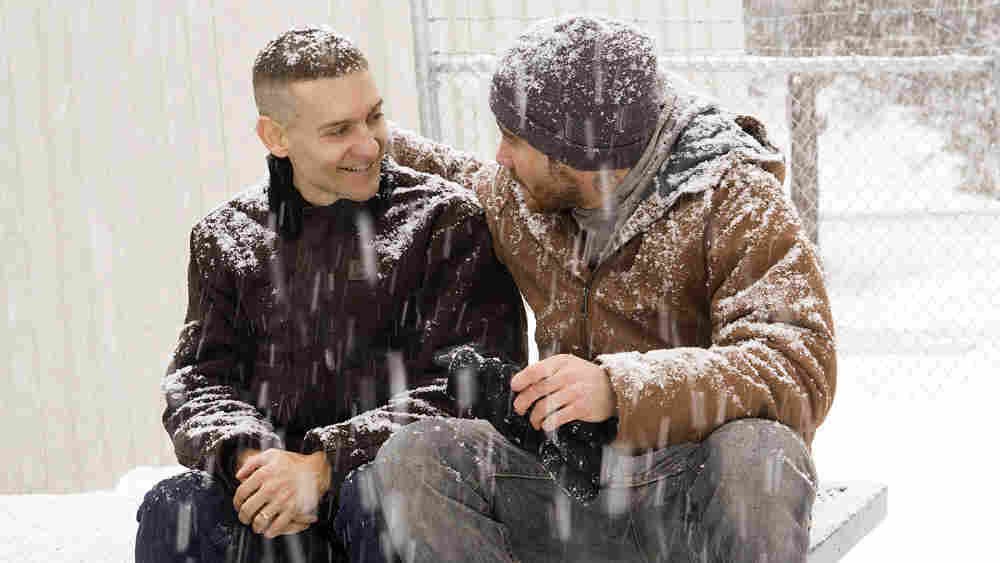 Two brothers, separated by ... everything — that's Brothers, a new film from Jim Sheridan, centered on the war in Afghanistan and what it costs a family here at home.

Sam, played by Tobey Maguire, is a captain in the Marines, has a wife and kids; he's solid, stable and headed out for another tour of duty in Afghanistan. His brother Tommy, played by Jake Gyllenhaal, never finishes anything, drinks too much and is just getting out of prison on the day Sam ships out.

And the family is lost, too: With nothing expected of him, Tommy's actually holding up best. Grace can barely drag herself out of bed, though she has to, for the kids.

But Sam's not lost, as it happens. I'm not spoiling anything here — from the moment Sam's copter goes down, Sheridan cuts between the grieving family and unfolding events in Afghanistan. He flashes between scenes of ne'er-do-well Tommy unexpectedly finding purpose as he helps Grace and the kids, and scenes of Sam being captured by the Taliban. From Tommy bonding with the family to Sam being tortured; first Tommy growing into a new maturity, then Sam wasting away. By the time Sam is rescued, he's damaged — so much so that his family can barely recognize him.

Brothers is an American remake of a Danish drama that was quite good, actually — very spare, without music or even artificial lighting coming between the audience and the characters. Sheridan has given the new version a jolt of star power — Maguire and Gyllenhaal scarily real as the titular brothers, Natalie Portman affecting as Grace. And he's also given it Hollywood polish, somehow without cheapening it. He takes his time establishing characters, works nuances rather than plot twists, and avoids histrionics, so that when emotional fireworks finally come, they're explosive.

In many ways, this Irish director is a perfect fit for the material. Family has always been central in his work, from My Left Foot to his story about his own parents, In America. Politics has been central too. And while that's rarer in Hollywood movies, it seems appropriate that this one notes the obvious: that the horrors soldiers experience in war don't always get left overseas when they come home.

Sheridan sticks to the family part of the equation, never leaning too hard on its social ramifications. With a troop surge announced just three days ago, he doesn't have to: You can't help peering at the barren, rocky landscapes in Brothers with widened eyes right now.