Accessibility links
'Elf' Jailed Over Dynamite Hoax On Mall Santa Man dressed as elf arrested after he tells mall Santa he's got a bomb in his bag. 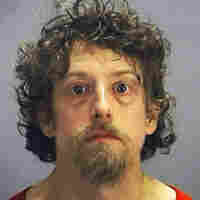 A man dressed as an elf is jailed after police in Georgia say he told a mall Santa that he was carrying dynamite.

Police say Southlake Mall in suburban Atlanta was evacuated but no explosives were found.

Morrow police arrested 45-year-old William C. Caldwell III, who was being held without bond Thursday in the Clayton County jail. He was not part of the mall's Christmas staff.

Police say Caldwell got in line Wednesday evening to have his picture taken with Santa Claus.

Police say when Caldwell reached the front of the line, he told Santa he had dynamite in his bag. Santa called mall security and Caldwell was arrested.