Accessibility links
Movie Review - 'The Lovely Bones' - Lineaments of Horror, Slightly Disarranged Saoirse Ronan brings an appealing naturalness to the part of a murdered girl looking down on the world that survived her, but our critic says Peter Jackson's film doesn't quite achieve the delicate balance of moods and methods that made Alice Sebold's novel such an oddly comforting tale of horror. 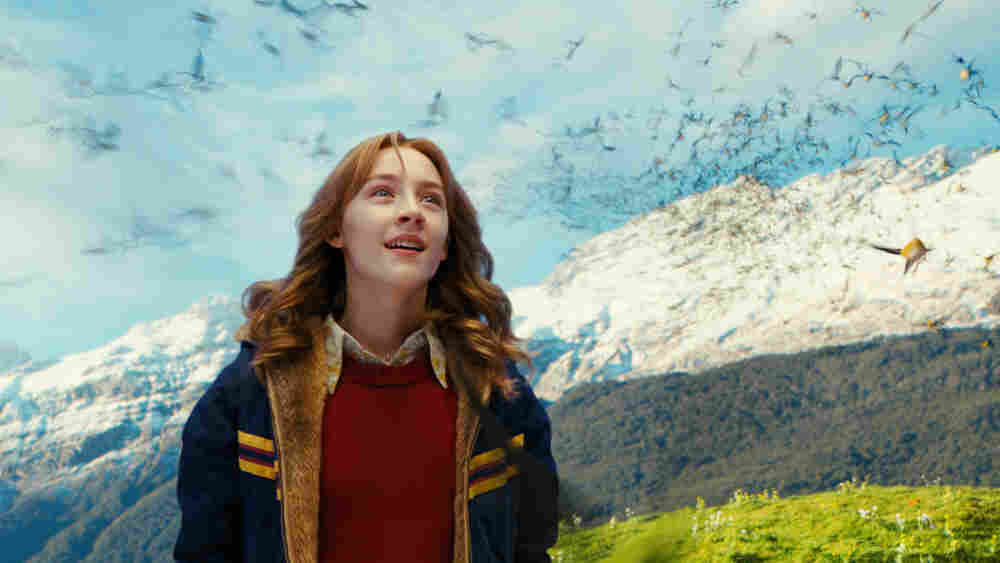 'Lovely,' isn't she? Saoirse Ronan brings an appealing naturalness to the part of a murdered girl looking down on the world that survived her, but Peter Jackson's film of The Lovely Bones misses the delicate balance that made the novel work. DreamWorks Studios hide caption

'You're A Salmon Girl'

'You're My First Mate, Susie-Q'

Of the making of films from best-selling novels, there is no end. Latest out of the box is a cinematic version of Alice Sebold's mega-selling The Lovely Bones, and where the novel magically blended together its mismatched moods — the warmly sentimental, the serial-killer sinister, the sci-fi fantastical — the unlikely combination doesn't work as well onscreen.

Director Peter Jackson and the writing team that tackled the Lord of the Rings trilogy took on the story about a 14-year-old girl who, at the outset, has been savagely murdered and is looking down on things from above.

Jackson's best move was casting young Irish actress Saoirse Ronan, Oscar-nominated for Atonement, as the murdered Susie Salmon. Ronan brings naturalness, honesty and radiance to the part of a teenager in the throes of her first romantic crush.

One of the other best things about Jackson's film is its imaginative creation of Susie's afterlife, where she watches as her friends, her family and her killer go on about their lives. A field of barley that changes into a rolling ocean, huge versions of the ships in a bottle that were her father's hobby — they all create a world that is particular to Susie, and that makes it appeal to us all.

The problem with the movie is that it emphasizes the weirdest, creepiest elements of the book, including its portrait of Susie's murderer. He's such a horrific individual that Stanley Tucci, the actor who plays him, says he came close to turning down the role.

These shocking things are key plot points, but seeing them on the screen makes them play differently, disturbing the story's balance. If the novel was ultimately comforting, the film leaves a queasy taste in your mouth — and that, in this telling of The Lovely Bones, might be the most shocking thing of all.