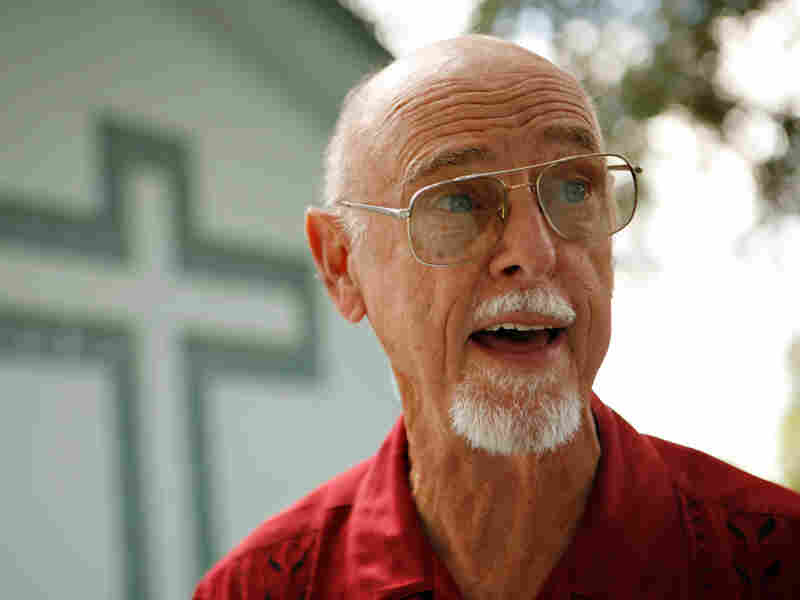 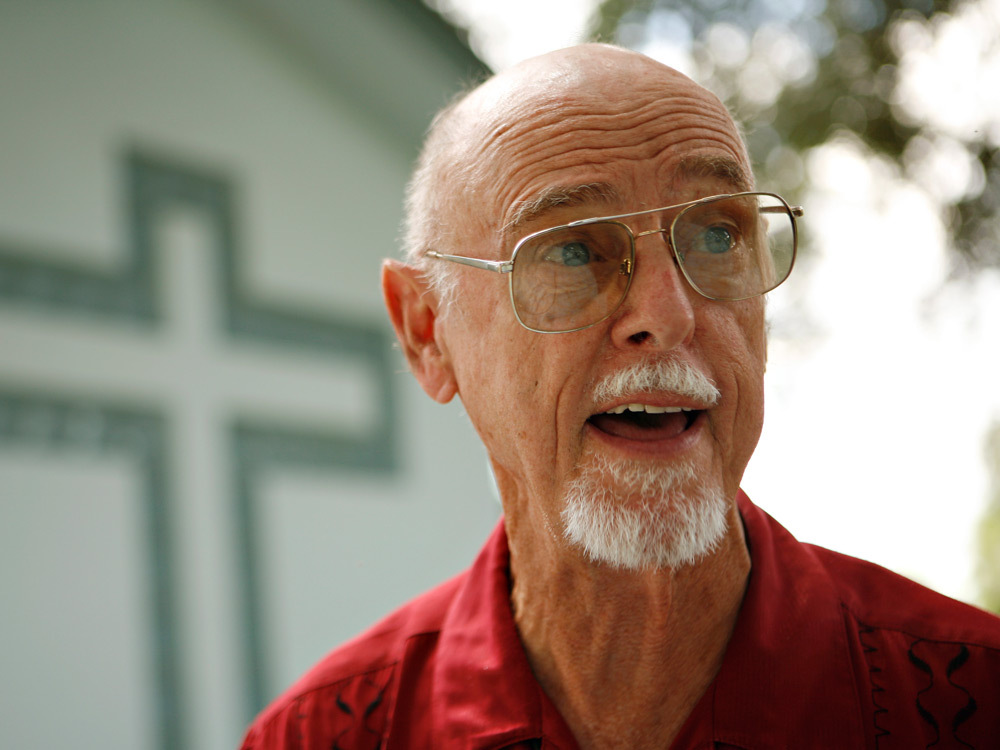 More than 20 states, including Florida, limit where convicted sex offenders can live — keeping them away from schools, parks and other places where children congregate.

In Miami, dozens of homeless sex offenders live under a bridge because there are few, if any, options nearby. But 90 miles away, there's a community dedicated to housing sex offenders.

Where Electronic Monitors Fill The Pews

On a recent Sunday morning, a few dozen men and just a few women gather at a little country church near Pahokee, Fla. They sing, pray and stand up to testify about the importance of God in their lives.

About the only sign that there's something unusual about this church comes when it's time for communion. Many of the men making their way to the altar are wearing ankle bracelets and electronic monitors on their belts.

This is the church at Miracle Park, a community mostly made up of sex offenders. Dick Witherow is their pastor.

Standing at the altar, he challenges the congregation. "How many of you were looking for God when you got saved?" He laughs, "You didn't choose God. He chose us."

I was guilty as could be. ... But God has forgiven me now, and so now my life is changing.

Shortly after he entered the ministry some 30 years ago, he began working in prisons, holding prayer services and doing addiction counseling.

Then, about a decade ago, he began focusing on sex offenders. After some horrific sex crimes involving children, Florida became one of the first states to pass laws restricting where sex offenders could live after they're released from prison — effectively banning them from some communities.

Witherow began looking at places where he could open a residential program for sex offenders, which didn't endear him to nearby communities. "I tell people I'm the most popular man in town," he says. "And of course, I'm saying that facetiously."

Witherow has authored a book about sex offenders called The Modern Day Leper. He says he could have worn the same label as the men at Miracle Park. He was 18 years old when he met his first wife. She was just 14, and before long she was pregnant. A judge allowed them to get married but told Witherow he could have been charged with statutory rape.

"If that would have happened in today's society, I would have been charged with sexual battery on a minor, been given anywhere from 10 to 25 years in prison, plus extended probation time after that, and then been labeled a sex offender," he says.

Witherow knows that there are those who argue that's what should have happened.

Witherow once had a ranch for sex offenders in Okeechobee County. But zoning law changes forced that facility to close. His search for another spot brought him here, to a small community he renamed Miracle Park. It's a collection of duplexes about 3 miles east of the town of Pahokee, in rural Palm Beach County.

It's surrounded on every side by sugar cane fields. About 40 of those living there now are sex offenders.

I think the good reverend knew that it wouldn't be much pressure from rural Palm Beach County ... not to do this. So the fight was easier here than it would be anywhere else.

"It's open to everybody," Witherow says. "However, the only ones that are really looking to be out here in the boondocks and pay $100 a week to live with somebody else, basically, are those who don't have anyplace else to go, which are the sex offenders."

Witherow didn't have the $5.5 million the owner wanted for the property. So instead of buying it, he became the property manager. One of his first acts was to let families with children know that a community of sex offenders was moving in, and that they might want to move out.

Most of the families left. Several later sued, saying they were forced from their homes unfairly.

Henry Crawford, the vice mayor of Pahokee, says, "The cry was so loud, man, you could hear it all over town."

On the western edge of Palm Beach County, Pahokee is a poor and mostly black community in one of the nation's wealthiest counties.

Crawford says that because Miracle Park is located outside of the city limits, there wasn't much local officials could do about it. He believes the sex offenders deserve a place to live. He just wishes it wasn't here.

"If this was in other parts of Palm Beach, I don't think this would occur," he says. "But I think the good reverend knew that it wouldn't be much pressure from rural Palm Beach County ... not to do this. So the fight was easier here than it would be anywhere else."

Not all the people who had been living in Miracle Park moved out. Stroll through the grounds and you'll run into elderly residents who have lived there for years. Many are former sugar company workers or their relatives.

Barbara Haywood lives there with her daughter and 9-month-old grandson. When she first heard that sex offenders were moving in, she says, she was scared. But not anymore. In her Bahamian accent, she says, "I'm [not] scared any of them because everyone pass, they give me a respect, you know?"

'God Has Forgiven Me Now'

Across the nation, communities are debating where sex offenders can live after they're released from prison. That includes Miami-Dade County, where a colony of sex offenders live under a bridge on the causeway leading to Miami Beach.

Witherow believes shared living arrangements like Miracle Park offer a solution. He says he screens the sex offenders who want to live here. Repeated offenses, burglaries and violent crimes are all red flags. And he says that, as a general rule, he won't accept pedophiles.

But these are still sex offenders, people who in many cases have done terrible things.

The operations manager at Miracle Park is Pat Powers, an efficient, compact man in his 60s. Twenty years ago, he was a racquetball coach who pleaded no contest to molesting 11 of his teen and pre-teen students.

"I was guilty as could be," he says. "Even to this day, there are times where I just feel like, you know, I let people down. But God has forgiven me now, and so now my life is changing."

Jill Levenson, an associate professor at Lynn University in Boca Raton, says it's possible that clustering so many sex offenders in one place could increase the risk for nearby communities, like Pahokee. But, she says, research shows that there are also benefits to placing sex offenders in shared living situations like Miracle Park.

She says the sex offenders often begin to police themselves. "If somebody is doing something that's risky," she says, "the others will call him out on that or report that to authorities because, in their mind, if one person goes on and re-offends, that's going to be problematic for everyone else that's living there."

It's been nearly a year since Witherow opened his community of sex offenders at Miracle Park, and financially, things aren't going well. He has used up $300,000 in savings and is running a deficit, in part because many of the sex offenders have been unable to find work and pay their rent.

Ever a man of faith, he says "God will provide."

But in the meantime, he is talking to corrections officials about a whole new group of sex offenders who need housing: senior citizens who have served their sentences and have Social Security but need just one more thing — a place on the outside where they will be allowed to live.