Accessibility links
Blanchett's Blanche, At The Heart Of A New 'Streetcar' You might think that the fluttery Southern belle with the trove of dark secrets would be one of the parts the Academy Award-winning actress has been dying to play. But Cate Blanchett says she tends to shrink from the big roles — until a director like Liv Ullmann makes the prospect an offer she can't refuse. 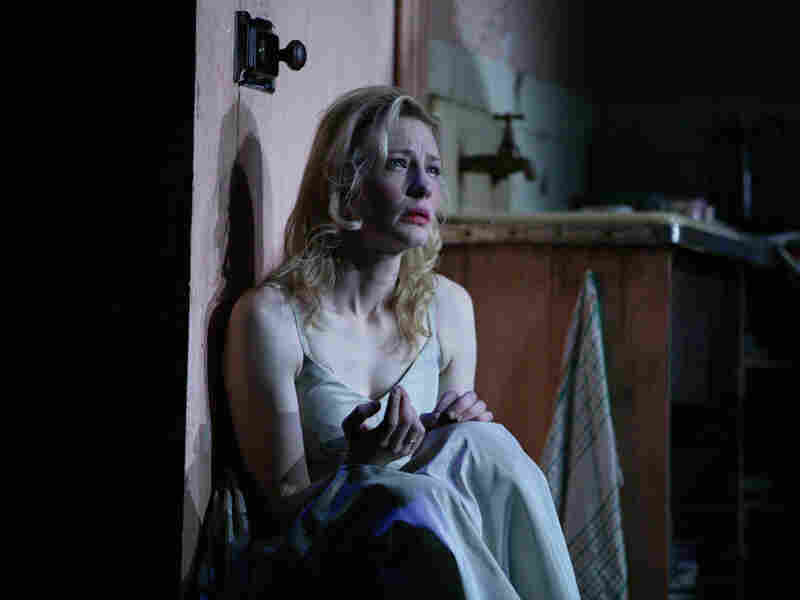 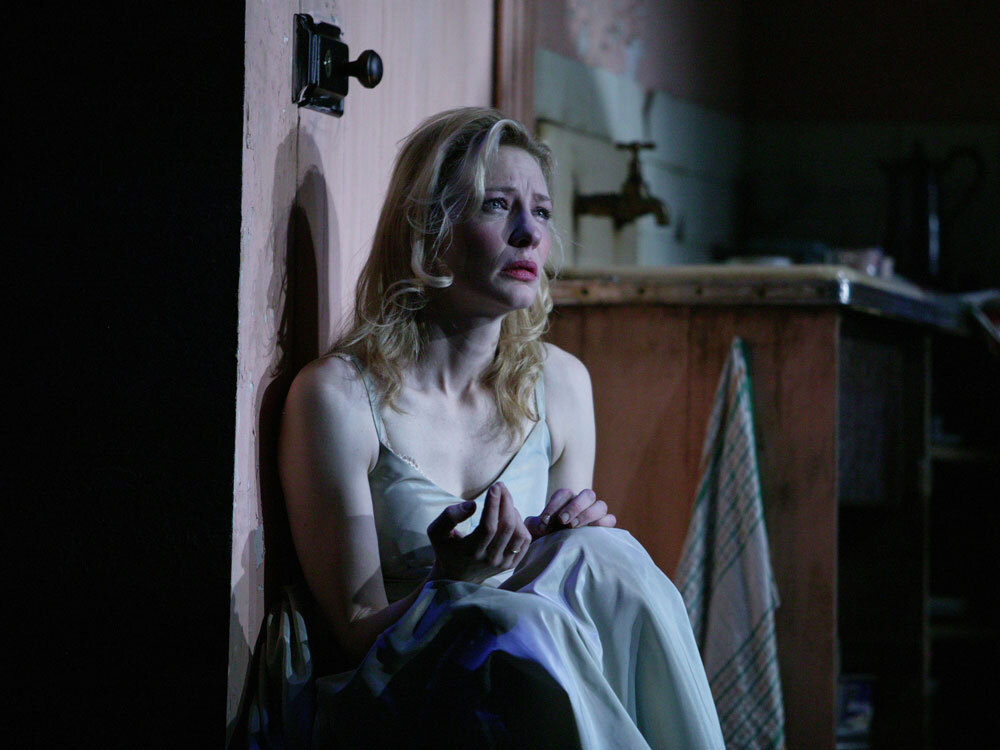 Becoming Blanche: The Streetcar heroine is the latest iconic role for Cate Blanchett.

Blanchett, On Self-Delusion And Survival

Blanchett, On Shame in 'Streetcar'

Liv Ullmann, On Hearing The Blues In Williams' Language

Now she's offering her interpretation of the leading lady in A Streetcar Named Desire, in a production that has made its way from Sydney, Australia, to Washington, D.C., and now to New York, where it plays through Dec. 20.

You might think that Blanche DuBois, the fluttery Southern belle with dark secrets, would be one of the parts this Academy Award-winning actress was dying to play. But you'd be wrong.

"It's one of those roles that one is expected to covet," says Blanchett. "But I think I always shy away from those opportunities, until, really, the play won't let you out of its grasp — it chooses you, rather than you choose it."

Actually, Blanchett's husband, Andrew Upton, chose the play — or rather, suggested it. He and Blanchett are co-artistic directors of the Sydney Theatre Company, and they were meeting with Liv Ullmann, star of numerous Ingmar Bergman films, to see if she'd like to direct something for their theater. When Ullman heard which play Upton was interested in producing, she said she "just died of happiness."

Blanchett says the opportunity to work with a great actress of a previous generation proved irresistible — that Ullmann brought "this incredible fragility" to the rehearsal room as the cast grappled with "a very robust play."

And Ullman helped Blanchett dig into the gray areas of Blanche's complex character — a woman who shows up, in desperation, on her sister's doorstep in New Orleans, after some shadowy goings-on in Mississippi. Blanche has a complicated relationship with the truth — telling white lies, telling big lies, preferring fiction to fact. 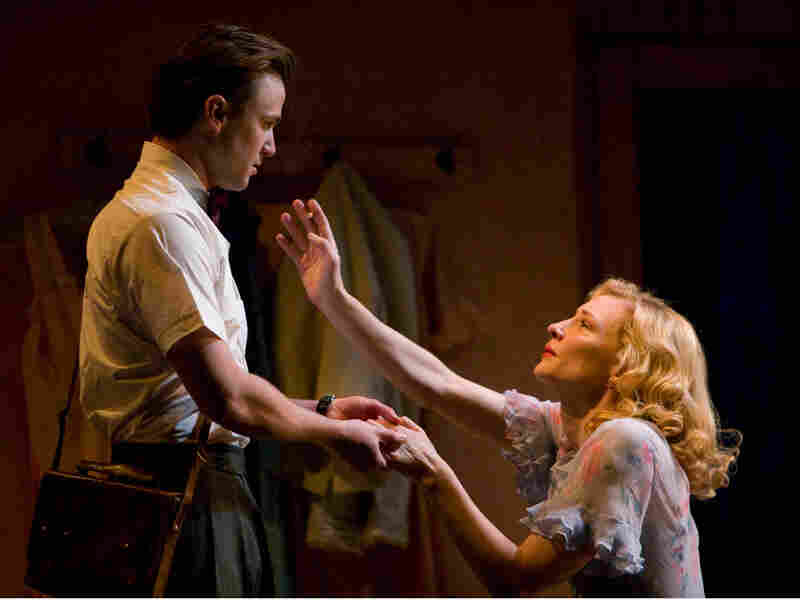 'I've Got To Be Good': The paper boy (Morgan David Jones) is just one of the temptations Blanche struggles with as she loses her moorings. Lisa Tomasetti/Sydney Theatre Company hide caption 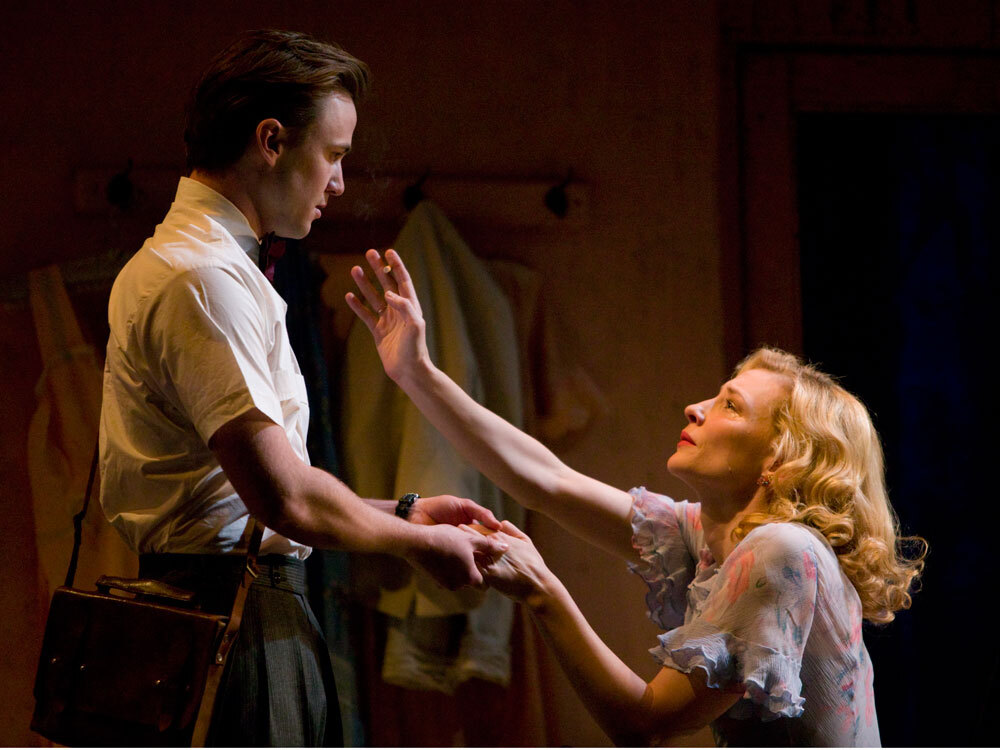 'I've Got To Be Good': The paper boy (Morgan David Jones) is just one of the temptations Blanche struggles with as she loses her moorings.

Blanche DuBois' pretense of respectability gets chipped away over the course of the play, but Blanchett says she admires a kind of resilience in the character, even as her life unravels.

"There's this unformed 16-year-old girl in her," the actress says. "That's what she's trying to get back to: that place of purity where she can begin again and can be seen for who she ostensibly feels she is. Her hopefulness and her desire to keep moving through this terrible set of circumstances — some of her own making, and some just a terrible misfortune — I do find very noble. She doesn't give up."

Looking Through A Different Prism

What ultimately derails Blanche is her sister's brutal — but sexy — husband, Stanley.

"I'm always struck by when Blanche says, 'The first time I laid eyes on him, I said to myself, That man is my executioner and he will destroy me,' " Blanchett says. "In the first instance, you can see your fate, but it's inescapable." From there the play follows the arc of a classic tragedy, building toward Stanley's famous line, "We've had this date since the beginning," and the sexual assault that will finally break Blanche's spirit.

In the original production, the role of Stanley made a star out of Marlon Brando. Blanchett notes that the cover of the published version of the play features a picture of Brando as Stanley, not a picture of Blanche.

She says when Tennessee Williams wrote Streetcar, in 1947, America was different — "the industrialized, capitalist America" where "any man could be king."

Now, "we can look at the play through a very different prism," says Blanchett. "And, perhaps, it's through Blanche's prism, because she represents, in a way, what we've lost. It's the death of poetry, the death of idealism, the death of that sort of reality — the validity that someone can actually create something ephemeral and beautiful, that one can't touch and hold and has no monetary value.

"They're very different states that both exist within America," Blanchett says, "but maybe it's a time where we can re-evaluate those fragile things that we've lost."