Accessibility links
Chicago Canal Flooded With Toxin To Kill Asian Carp Authorities dumped 2,300 gallons of a fish-killing toxin into a 6-mile stretch of the Chicago Sanitary and Ship Canal, targeting the invasive Asian carp. Although none of the fish have actually been seen in this part of the canal, Asian carp DNA was found in water samples. 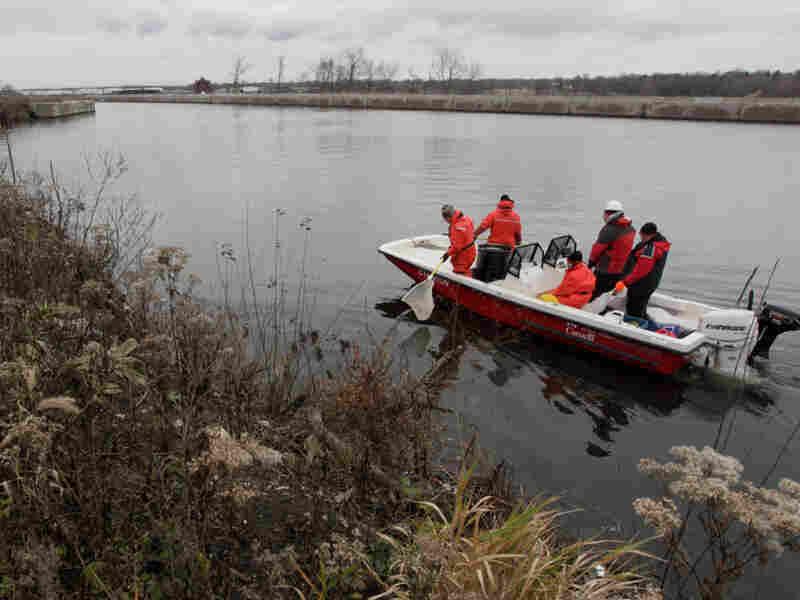 Crews search for Asian carp Thursday in the Chicago Sanitary and Ship Canal in Lockport, Ill., after a toxic chemical was dumped on a nearly 6-mile stretch of the canal in an effort to keep the voracious and invasive carp from reaching the Great Lakes. M. Spencer Green/AP hide caption 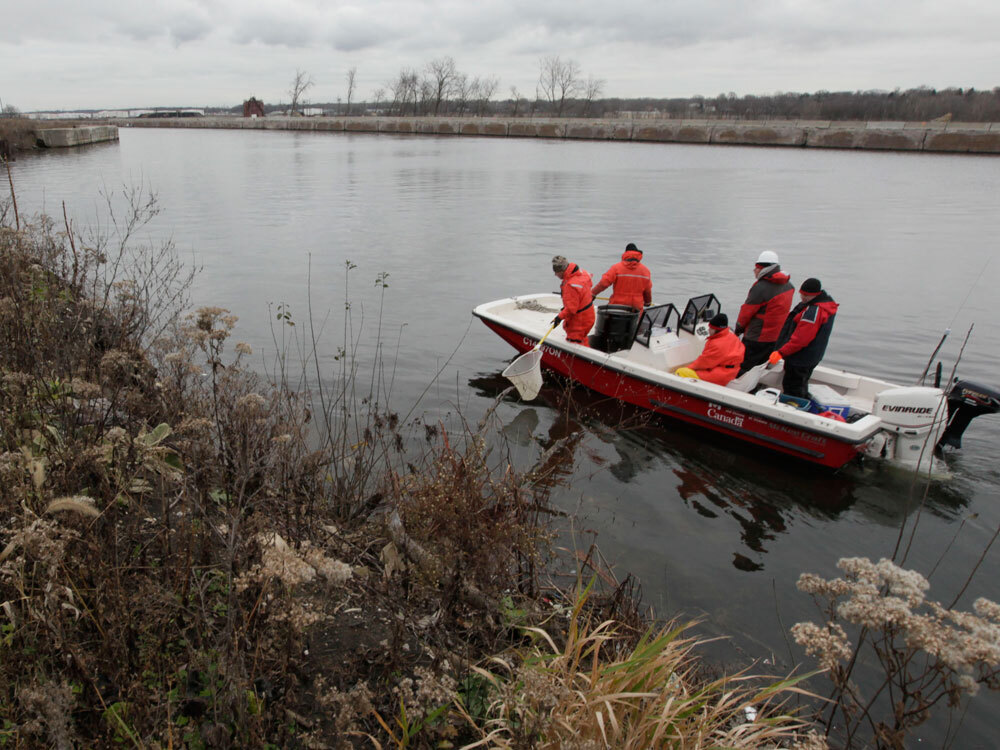 Crews search for Asian carp Thursday in the Chicago Sanitary and Ship Canal in Lockport, Ill., after a toxic chemical was dumped on a nearly 6-mile stretch of the canal in an effort to keep the voracious and invasive carp from reaching the Great Lakes.

Chicago's winters are notoriously nasty. Yet everyday from November through March, even this week when temperatures plummeted below freezing for the first time this season, dozens of fishermen brave the wind and the cold to fish for little Lake Michigan perch.

"I'm out here five days a week," says John Calderon of Chicago's South Side. "I'm out here all winter. I can take the cold, you know. I'm out here when there's ice here; we have to break through it just to get 'em."

Calderon says the lake perch "are good eating. And I freeze 'em, and actually we eat them in the summer."

But Calderon and his fishing buddies on this downtown pier worry that their tasty perch could disappear if the dreaded Asian carp, an invasive species, get into Lake Michigan.

"Oh, they'll kill all our fish because they gotta eat," Calderon said. "They eat a lot. They're the biggest eaters of all, and I don't want them around."

Calderon is right to worry, ecologists and biologists say. Asian carp are a huge and voracious fish. The Bighead Asian carp can grow 4 feet long and weigh up to 100 pounds. Silver Asian carp grow into the 20- to 40-pound range. Both are filter feeders at the bottom of the food chain and eat constantly, consuming up to 40 percent of their body weight in plankton each day.

Asian carp are so prolific at reproducing, some call them the rabbits of the water. And with no natural predators in U.S. waters, Asian carp can quickly starve and crowd out native species of fish.

In the 15 or 20 years since floodwaters washed them out of Southern fish farms, where they were imported to control algae, Asian carp have taken over some parts of the Mississippi, Ohio, Missouri and Illinois Rivers. In some parts of Illinois, for example, Asian carp now make up more than 90 percent of the fish population.

And the Silver can be dangerous. When startled by boat motors, Silver Asian carp can jump 10 feet into the air. With so many of them in the Illinois River, several boaters and Jet Skiers have been injured by the flying fish.

For the past 15 years, these fish have been migrating rapidly northward into the man-made canals that connect the Mississippi River system to the Great Lakes. Asian carp DNA was recently discovered in water samples just 8 miles from Lake Michigan, though the actual fish haven't been spotted there yet.

"There's never been a more important time for the federal and state governments to stand up and do the right thing," says Joel Brammeier, acting president of the Alliance for the Great Lakes, a Chicago-based conservation group. "If we don't take the right steps today, we are consigning the Great Lakes to a future as carp ponds."

The most drastic action to date to try to stop Asian carp from getting into Lake Michigan was taken Wednesday, when authorities dumped 2,300 gallons of the fish-killing toxin Rotenone into a 6-mile stretch of the Chicago Sanitary and Ship canal. Authorities conducted the massive fish kill to ensure that no Asian carp were in the waterway and could sneak through while the U.S. Army Corps of Engineers shut down for maintenance an underwater electric barrier designed to turn back the fish. 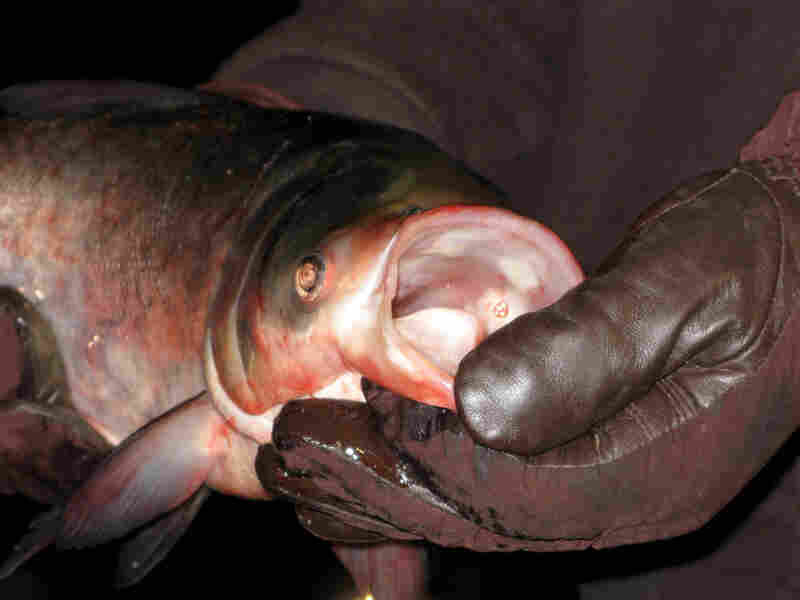 An Asian carp that was killed and scooped out of the water is displayed by a worker Thursday. The carp was found in the Chicago Sanitary and Ship Canal, less than 40 miles from Lake Michigan. David Schaper/NPR hide caption 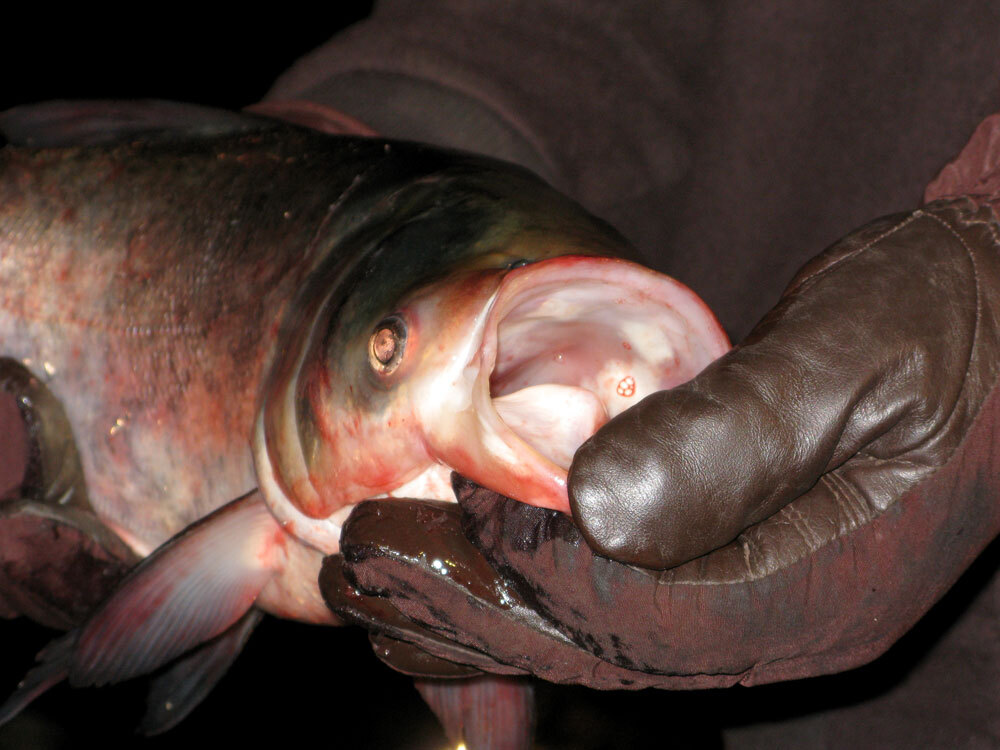 An Asian carp that was killed and scooped out of the water is displayed by a worker Thursday. The carp was found in the Chicago Sanitary and Ship Canal, less than 40 miles from Lake Michigan.

Since Thursday, teams of biologists have been zipping up and down the canal, using nets to scoop up tens of thousands of dead fish, specifically on the lookout for Asian carp. Late Thursday, they found one dead Bighead carp.

"We believe this will reduce or eliminate any remaining doubt of the need for this operation," said John Rogner, assistant director of the Illinois Department of Natural Resources. "We've now confirmed with a body what the DNA evidence has suggested — that Asian carp are indeed knocking on the door of the Great Lakes."

Rogner says the spot where the fish was found is less than 40 miles from Lake Michigan, and that's the closest to the lake any Asian carp has been found.

Scientists discovered the Asian carp DNA earlier this fall in water samples taken from areas upstream of the kill zone and well beyond the $10 million electric barrier designed to zap and stun the fish into turning back.

"It hasn't worked," said Henry Henderson, Midwest director of the Natural Resources Defense Council. He and many other environmentalists and conservation groups are calling on the Army Corps of Engineers to close three Chicago navigational locks into Lake Michigan, at least temporarily, to keep Asian carp from getting into the Great Lakes.

Michigan Gov. Jennifer Granholm is threatening legal action to force the corps to close the locks, to protect a $7 billion-a-year sport fishing industry in the Great Lakes.

"In the short term, we're concerned that the emergency response plan isn't sufficient," said Ken DeBeaussaert, director of the Michigan office of the Great Lakes. "Closing the locks would be an appropriate additional response that should be pursued."

DeBeaussaert and others also suggest it might be time to end the Chicago diversion of Lake Michigan water into the Chicago River and shipping canals, a major engineering feat when completed a little over a century ago, and permanently separate the Great Lakes and the Mississippi River watersheds as nature intended.

Federal officials say closing the Chicago locks is something that is under consideration but needs further study.

Meanwhile, DNA water sampling will continue in the canals, and commercial fishing vessels with nets will try to pinpoint exactly how close Asian carp are to getting into the Great Lakes.