Accessibility links
Russia Quietly Creates Leaner, More Modern Military The transformation of Russia's military may be the most successful of President Dmitry Medvedev's programs, but it's also one of the most controversial. The huge project involves painful cuts and dismantling deep-vested interests that have thrived on bloated, Soviet-style armed forces. 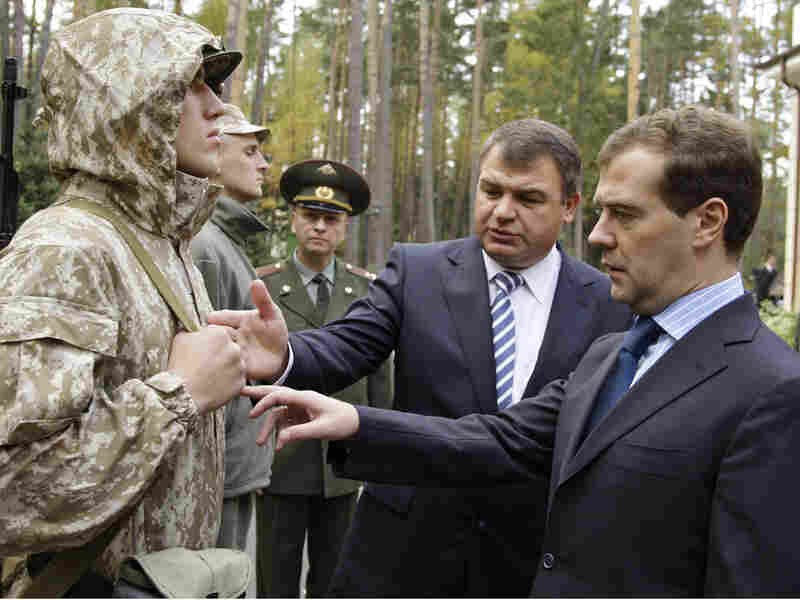 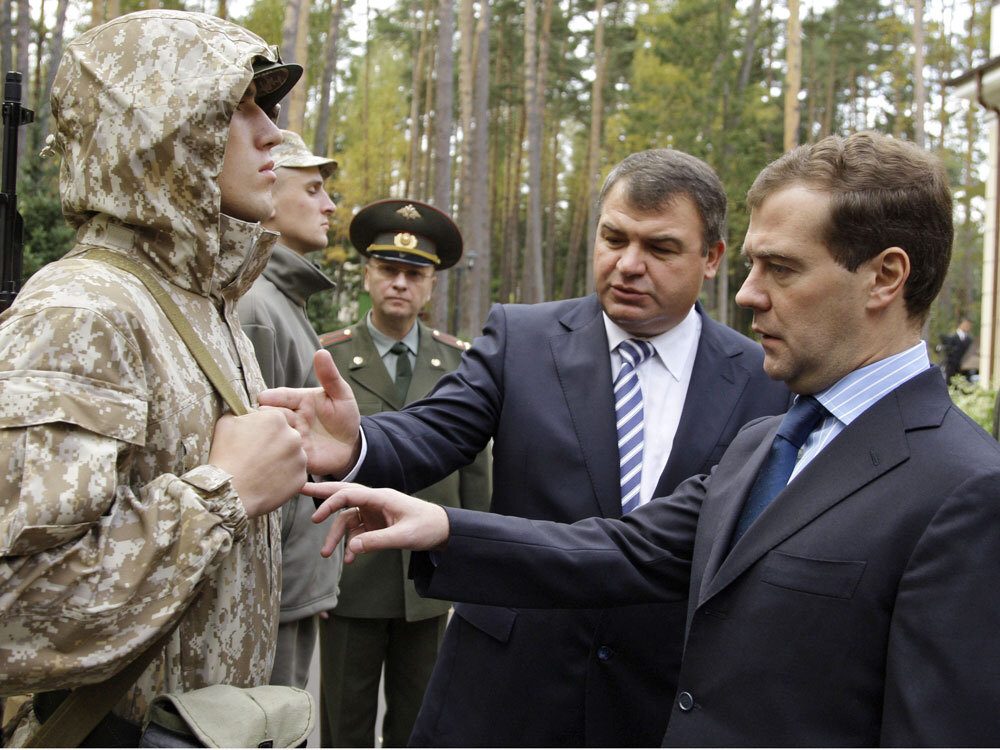 Russian President Dmitry Medvedev (right) and Defense Minister Anatoly Serdiukov inspect a Russian soldier's military uniform Oct. 8 at a base outside Moscow. The two leaders are spearheading a massive and highly controversial overhaul of the Russian military.

The transformation of Russia's military may be the most successful of President Dmitry Medvedev's modernization programs, but it's not something he talks about much publicly because it is so controversial.

Vitaly Shlykov, a 75-year-old former intelligence officer, has been fighting the military establishment for nearly 20 years, but at last he believes real change is here to stay. He is chairman of a public commission advising the defense ministry.

For centuries, Moscow's armed forces have been organized for emergency mass mobilization. Military analyst Alexander Goltz says Russia has now rejected this model in favor of a leaner, smarter force.

Pavel Zolotarev with the Russian Academy of Sciences says this radical change is not without opposition.

"Many think Russia cannot forget about the NATO threat or our huge border with China. Then there are the officers who worry about their future. For those being let go, the government is not fulfilling its promises to provide benefits and apartments," Zolotarev says.

But the reorganization of the military is well under way. The man leading the transformation is Anatoly Serdiukov, a skilled manager and the first civilian defense minister in Russian history.

That fact alone, says Shlykov, the former intelligence officer, is a stunning change.

"Until now, each new minister of defense lobbied for his own branch to the point where the military was almost destroyed," he says.

Under Serdiukov, the overall size of the armed forces is being cut by one-quarter, with the officer corps taking the biggest hit. Already, 50,000 have been forced to retire. Another 150,000 will be pushed out in the next few years.

For those left, education and salaries are to be improved dramatically. Military units are being streamlined and, finally, there will be professional sergeants — the first 250 are being trained. Until now, first-year draftees have been controlled by second-year conscripts; among the results have been brutal, often deadly hazing, poor morale and poor training.

"For the first time, we hear generals say, 'Guys, we are here to buy good equipment. We don't want to buy the rubbish you produce,' " he says.

And the so-called rubbish is expensive. For the first time, Russia's defense ministry has gone abroad for weapons. Zolotarev with the Russian Academy of Sciences says the government has so far failed to modernize the Russian defense industry.

Until the current inefficient, corrupt system is totally changed, Zolotarev says, Russia will not have quality weapons and could well lose its position in the world as a major arms supplier.