Accessibility links
Something Old, New, Pickled and Blue Before her fiancé came along, food blogger Molly Wizenberg didn't think about pickles much. The jarred dills she grew up with were nice, but nothing to make a fuss about. Then along came Brandon -- and a universe of things pickled and brined.

Something Old, New, Pickled and Blue

Something Old, New, Pickled and Blue 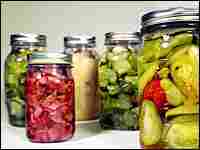 A special guy in her life introduced food blogger Molly Wizenberg to a whole universe of things pickled and brined. iStockphoto.com hide caption 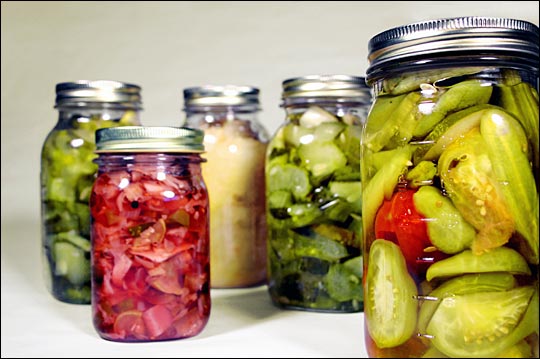 A special guy in her life introduced food blogger Molly Wizenberg to a whole universe of things pickled and brined.

Molly Wizenberg is a food writer living in Seattle. She publishes food stories and recipes on her blog Orangette, which has been called "downright addictive" by the Chicago Tribune. She is currently writing her first book, to be released in fall 2008 by Simon & Schuster.

Before my fiancé came along, I didn't think about pickles much. I grew up with a bottle of store-bought kosher dills in the refrigerator door, and they were the only pickles I knew. I ate them alongside grilled cheese sandwiches, and that was about it. They were nice, but nothing to make a fuss about. Then along came Brandon, and with him, a whole universe of things pickled and brined.

There were clues. I heard about his vinegar collection before I laid eyes on him: The man is obsessed with vinegar. His pantry, he told me proudly on our first phone call, contained at least 30 types, from the simplest white vinegar to aged balsamics, specimens made from Cabernet grapes and others made from cherries.

For someone who loves to cook as much as I do, meeting him was like winning the lottery -- only instead of a big check, my grand prize was pickles.

Each night, Brandon scours the shelves, sampling and sniffing, to pick the best vinegar for our salad. When we make soup, he sometimes adds a drop of vinegar to help perk up the flavors.

And whenever we have a surplus of a particular fruit or vegetable, he commandeers the stove and cooks up a batch of pickles -- or, as I now think of it, vinegar in its most delicious, lip-smacking form.

Before Brandon, I'd never dreamed of such things as red onion pickles or pickled prunes with orange zest. I now know that a kosher dill is good, but a pickled grape is great.

Brandon has always had a thing for pickles, but most of what he knows about making them he learned more recently at Seattle's Boat Street Café and Kitchen. It was there that he had what he calls his "pickle awakening."

It came with the restaurant's signature pickle plate appetizer, a painter's palette in shades of vinegar and salt: a stroke of asparagus here, a splotch of peppers there, a splash of rosy onions, spindly young carrots, golden raisins, even cauliflower tinted with turmeric.

Each pickle was infused with its own mixture of spices: some sweet, some prickly, all ticklish to the tongue. A heady cloud of vinegar hovered over the plate, and we plunged our noses into it. These were not your soggy jarred spears; they were serious pickles, the kind that get under your skin.

It wasn't long before Brandon applied for a job at Boat Street. (You've got to love a man who goes to such lengths for his pickle habit.) He now helps with catering and cooks the occasional lunch shift.

He not only gets to eat plenty of pickles, but he has also befriended the pickle-makers themselves: Renee Erickson, chef-owner of the dinner-only "café," and Susan Kaplan, chef and co-owner, with Erickson, of the "kitchen," the catering and lunch side of the business. With their inspiration and guidance, Brandon is now cooking up a variety of pickles on his own.

Our home kitchen often moonlights as a small-scale pickling plant. The smell of hot brine can make you cough at first, but once you get accustomed, it's kind of intoxicating. On the right man, it makes a lovely cologne.

Brandon and I will be married in a few days. Our rehearsal dinner will be a picnic, and because no summer meal is complete without something cool and crunchy, we're making pickles. (Our caterer offered to provide them, but that was before they heard about Brandon.)

We'll be busy with guests and last-minute errands, but it really isn't any trouble. We're making the simplest pickles we know -- which, conveniently, are also some of the best.

First on the list are Brandon's quick-pickled red onions, doused with apple cider vinegar and a pinch of sugar. It's a recipe he made up on the fly for a Mexican supper with friends last spring, to enliven plates of beans and braised pork tacos. Soft but still crunchy, the onions are delicious on a sandwich, but we hope our guests will eat them out of hand, too, with swigs of cold beer.

In addition, we're calling into service a couple of Boat Street recipes, offered to us with wedding blessings. We'll be making the restaurant's sweetly spiced pickled prunes, which pair beautifully with pâtés and cured meats. (I made a trial run of the recipe for a cocktail party in May, and all around the buffet, people gasped and marveled, "These are prunes?" They're that good.)

We're also borrowing Boat Street's recipe for pickled grapes with mustard seeds and cinnamon. They're cold, crisp-skinned and sweet-tart, and sure to get conversation flowing among our newly joined families and friends.

Tradition says that on her wedding day, every bride needs "something borrowed." It's only appropriate, of course, that mine should be a couple of pickle recipes. 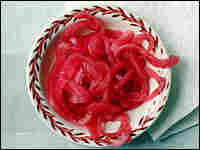 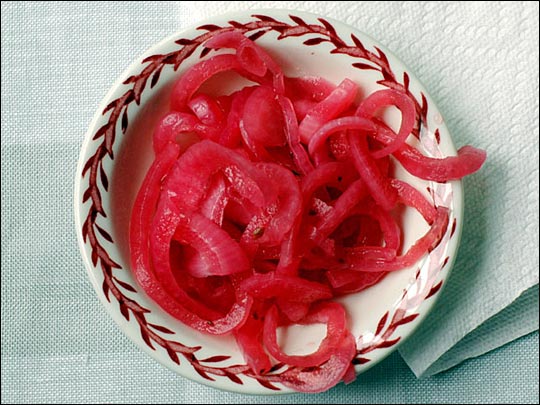 These pickles are as delicious as they are quick and easy to make.

Combine the first 6 ingredients in a medium saucepan, and place over medium heat.

While the brine heats, prepare the onions. Peel and trim them, and cut them in half from root to stem end. Then slice each half as thinly as you can into half-moons. Ideally, no slice should be thicker than 1/4 inch.

When you've finished slicing the onions, check the brine. If it isn't boiling, increase the heat to high. When the brine boils, add the onion slices all at once, and stir to combine. Immediately remove the pan from the heat, cover, and let stand for about 25 minutes.

Transfer the onions and brine to a large bowl, and set aside to cool at room temperature. (Or, if you're in a hurry, put the bowl in the refrigerator.) When the onions are fully cooled, pour them and their brine into jars with tight-fitting lids, and store in the refrigerator. Unlike other types, these quick pickles are ready to be eaten as soon as they are fully cold.

These pickles will keep, chilled, for up to 2 weeks. 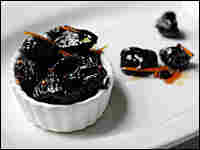 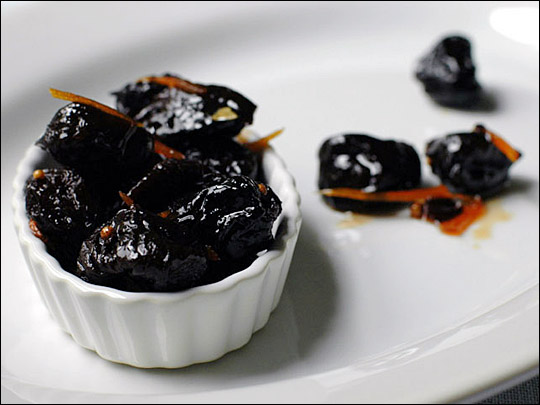 This recipe is adapted from one by Susan Kaplan of Boat Street Kitchen in Seattle. Pickling spice is a blend of whole spices used for pickling meats and vegetables. The ingredients vary, but most blends include cinnamon, mustard seeds, bay leaves, allspice, cloves, ginger, peppercorns, coriander and mace. At Boat Street Kitchen, they make their own, but pre-made blends are easily available. For my pickled prunes, I've used McCormick's pickling spice, which I found at my local supermarket. If, in the cooking process, the prunes threaten to fall apart, remove them with a slotted spoon, reduce the syrup, and then add the prunes.

Zest of half an orange (zest should be matchstick size)

Combine all ingredients in a medium-sized, heavy saucepan, and bring to a boil over medium-high heat. Reduce the heat to medium, and cook for 15 minutes, stirring occasionally. Reduce the heat to low, and continue to cook gently until the liquid has reduced to a thick syrup. Cool to room temperature. Transfer to 1-quart, air-tight container and chill. Serve cold or at room temperature.

These pickles will keep, chilled, for at least 2 weeks. 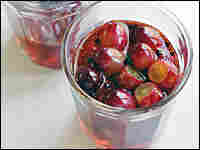 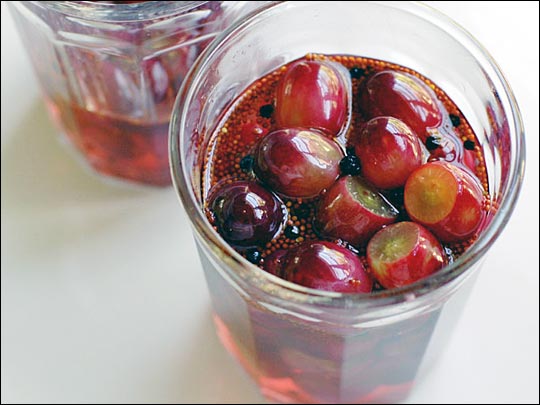 These may sound curious, but they're a real crowd-pleaser: crunchy, sweet and warmly spiced. The recipe is adapted from Susan Kaplan of Boat Street Kitchen in Seattle. I like these grapes best within the first four days after they're made, but some people like them even more after a week or two. Their pickled flavor gets stronger over time, and their skins will wrinkle slightly.

Rinse and dry the grapes, and pull them carefully from their stems. Using a small, sharp knife, trim away the "belly button" at the stem end of the grape, exposing a bit of the flesh inside. Put the grapes into a medium bowl, and set aside.

In a medium saucepan, combine the remaining ingredients. Bring to a boil over medium-high heat; then pour the mixture immediately over the grapes. Stir to combine. Set aside to cool at room temperature.

Pour the grapes and brine into jars with tight-fitting lids (or cover the bowl with plastic wrap), and chill at least 8 hours or overnight. Serve cold.