Accessibility links
Leaders Descend On Copenhagen For Climate Talks The world's leaders are descending on Copenhagen for the long-awaited United Nations climate conference. NPR's Richard Harris fills in host Guy Raz on the gap between rich and poor nations, and why the last major climate treaty, worked out in Kyoto, Japan, didn't live up to its promise.

The world's leaders are descending on Copenhagen for the long-awaited United Nations climate conference. NPR's Richard Harris fills in host Guy Raz on the gap between rich and poor nations, and why the last major climate treaty, worked out in Kyoto, Japan, didn't live up to its promise.

This is ALL THINGS CONSIDERED from NPR News. I'm Guy Raz.

Diplomats from nearly 200 countries are gathering in Copenhagen today to prepare for a two-week negotiation session on global warming. The goal of the United Nations process is clear: Get the nations of the world to work together and limit the build-up of carbon dioxide and other gases that are warming our planet. But there are huge disagreements about how to get that done.

NPR's Richard Harris will be in Copenhagen. But right now, he's here with me in the studio.

RAZ: Now, Copenhagen originally was supposed to produce a legally binding climate treaty. That is not going to happen now. So, what do world leaders hope to accomplish over the next two weeks in Copenhagen?

HARRIS: What they're really hoping to come up with is at least a political agreement, sort of a meeting of the minds to set the stage for next year coming back and actually coming up with a legally binding agreement. But what that political agreement's going to be is in play very much. They don't really know. They've got huge, huge questions to deal with.

One thing is how much are people going to step forward and say we'll cut our emissions by X, Y and Z. We're already hearing some of those pledges. The United States did it around Thanksgiving, as did China, Europe's on the record. So that part is at least happening.

But we don't even know what a legally binding agreement will even end up looking like. It could look like the old Kyoto Protocol, which is the current climate deal, or it could look like something completely different.

HARRIS: Well, the biggest political fault line is really north-south, the rich countries versus the poor countries. Under the Kyoto Protocol, developing countries had no obligation to do anything, and the rich countries did have obligations to do things. The developing countries would like to hang onto that sweet deal and not be forced into doing something. But by now, the United States and other countries are saying, look, if China's not going to promise to do something, we aren't either. We'll never be able to sell it to the Senate. So that's the biggest fault line.

But there are many other ones. Money is always a big issue here. The poorest of the poor countries will not be asked to do anything in Copenhagen, but they're saying, how much money are you going to give us to help adjust to climate change and to build a clean economy?

RAZ: Now, Richard, the Copenhagen talks were sort of put together because the current climate treaty, the Kyoto Protocol, didn't work out well, right?

RAZ: Now, here, of course, in the U.S., the Clinton administration signed it. It wasn't ratified by the Senate. Most of the countries that did sign it won't cut their emissions by anywhere near as much as they promised. Does that experience in any way affect the talks at Copenhagen?

HARRIS: It sure does. And one of the most important ways it does is the United States decided this time, we're not going to promise something and then try to bring it back and get the Senate to buy into it. It's why the process has been slow is they've been waiting for the Senate to step up and say this is what we envision, what we're willing to do as a domestic climate deal, and then take that to Copenhagen as the U.S. position, and that's pretty much what President Obama has done, although, in fact, the Senate hasn't come to terms with what it's going to do for climate change.

So there's a big asterisk when Mr. Obama said we'll do thus and such. He said it's provisional, essentially, on the Senate actually acting. So that's one major thing that's different.

The other thing that is happening is, I think, that Europe and other countries also are tired of working under the Kyoto Protocol, which does not include us and which does not include many of the other rapidly developing nations like China and India in any serious way. So I think there's a determination from many sides to have something with a lot more teeth than Kyoto had.

Richard, thanks so much.

RAZ: And have fun in Copenhagen. 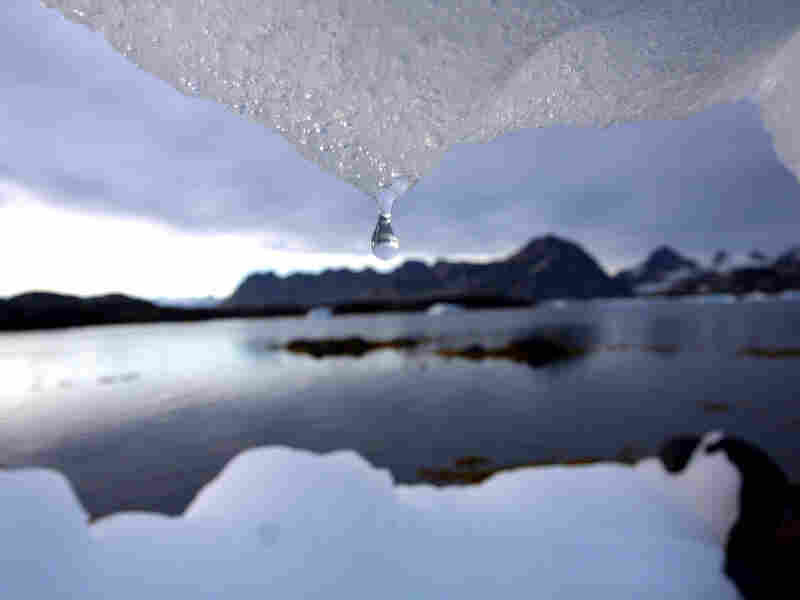 An iceberg melts in Kulusuk, Greenland, near the Arctic Circle in this 2005 photo. Skepticism over global warming has been growing, and according to a recent Harris Poll, barely half of the American public believes that the carbon dioxide building up in the atmosphere could warm our planet. John McConnico/AP hide caption 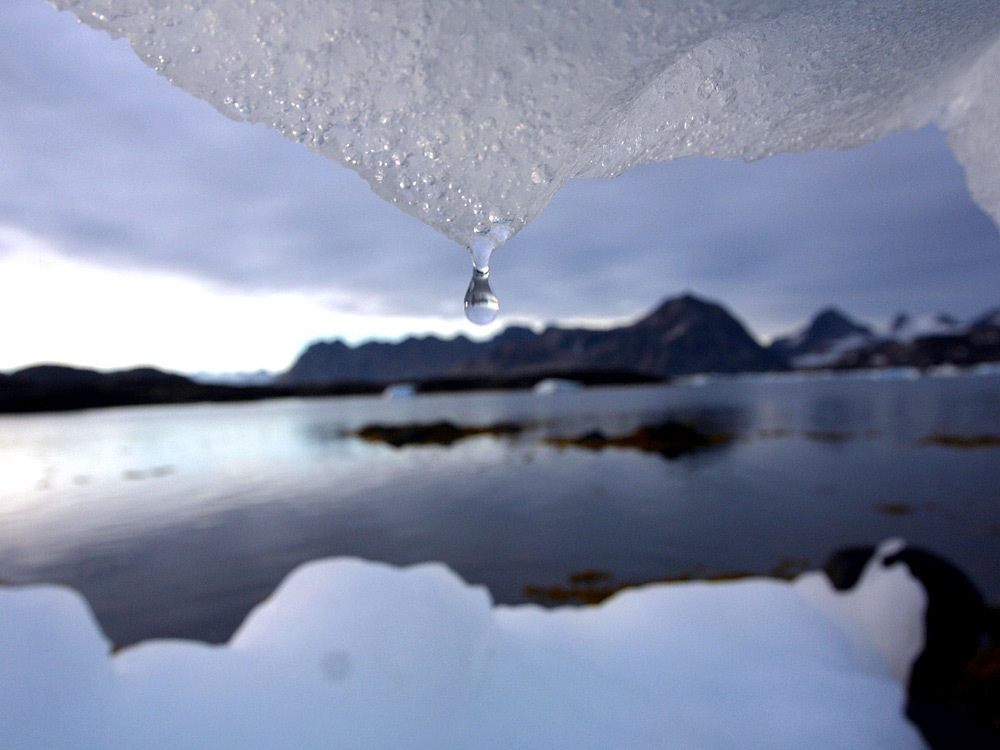 An iceberg melts in Kulusuk, Greenland, near the Arctic Circle in this 2005 photo. Skepticism over global warming has been growing, and according to a recent Harris Poll, barely half of the American public believes that the carbon dioxide building up in the atmosphere could warm our planet.

Nearly 100 world leaders are expected to appear at the global warming talks that open Monday in Copenhagen. This is an unprecedented showing of leadership for the issue. Yet at the same time, public opinion of climate change is souring — particularly in the United States.

A recent Harris Poll, among the latest of several over the past year, shows that barely half of the American public believes that the carbon dioxide that's building up in the atmosphere could warm up our planet.

There are multiple reasons for this growing skepticism, including psychological reactions and politics. Anthony Leiserowitz of the Yale University School of Forestry puts one reason above all the rest: "First of all, it's the economy, stupid."

People can only worry about so many issues at one time, he says. So it's no surprise they worry about issues that hit closest to home.

"And the economy is still by far the No. 1 concern of Americans, which just pushes all other issues off the table."

In a poll by the Pew Research Center for the People & the Press, climate comes in dead last, No. 20 of the 20 big issues of concern to America. But that doesn't completely explain why a number of recent polls show that people are less and less likely to accept the science of global warming. Here's where psychology comes in.

Even as scientists become more confident that climate change is a serious hazard, public opinion is shifting the other way, says Kari Marie Norgaard at Whitman College in Walla Walla, Wash.

"This seems irrational," she says. "And in that sense, it's challenging the basic premise that we have of an enlightened, democratic, modern society."

Norgaard studied this shift in public opinion and found that as people start to feel overwhelmed by the scope of the problem, they simply turn away from the topic. It's a form of denial, she says.

That implies that some of the swing in public opinion can actually be explained as a reaction to growing public awareness of the issue, like Al Gore's movie An Inconvenient Truth, or the 2007 United Nations science report.

But psychology isn't the whole answer, either. Leiserowitz's opinion research shows that there's a relatively small but active group of people who have decided that climate change is a phony issue.

"The people who are pretty skeptical about whether this is even an issue to worry about, they're pretty mobilized right now," he says, "and they're amplifying their message across the country."

Right now, they're having a field day with the e-mails stolen from climate scientists. Skeptics have taken some suspicious-sounding statements in those e-mails as proof that climate change is a hoax. That's certainly not the view of mainstream scientists, but again, the public doesn't necessarily listen to scientists.

People trying to stir up doubt about climate change aren't working in a vacuum, says Tim Wirth, a former Democratic senator who now runs the United Nations Foundation. There's a large and well-funded effort to block legislation that could hurt the industries most responsible for carbon emissions.

"Where does that money come from?" he asks. "Well, it comes in part, sometimes in large part, from the very industries whose ox is going to get gored if there's aggressive climate legislation. So that gets increasingly difficult on Capitol Hill."

The Effect Of Public Opinion

The ultimate question is: How important is public opinion in the fight over climate change legislation?

What does matter is the influence of the naysayers. And they don't need a majority voice to make a big difference.

So proponents of action on climate change — both on Capitol Hill and in the White House — have tried to build public support for climate issues by actually not talking about global warming. Instead, they are framing their actions in terms of green jobs and energy security.

Leiserowitz says that's a good strategy. He's found that the public is leery of regulations to control global warming. But, he adds, "When you ask a question like, 'Would you support a system that supports rebates for solar panels or people who buy fuel-efficient cars,' everybody likes that idea."

Questions like that get positive responses in the 90 percent range, he says. "That's a higher [percentage] than likes apple pie, or their own mother, probably," he said, only half-kidding.

So the question ultimately may not hinge on whether the public is deeply concerned about global warming, but how expensive and disruptive it turns out to be to address it.