Accessibility links
Movie Review - 'A Single Man' - In '60s L.A., A Somber, Stylish Encounter With Grief Fashion designer Tom Ford makes a stylish debut with A Single Man, starring Colin Firth as a closeted gay man struggling with solitude after his longtime partner is killed in a car crash. Critic Bob Mondello says the film is a visually sensitive tale of a man learning at last to live in the moment. (Recommended) 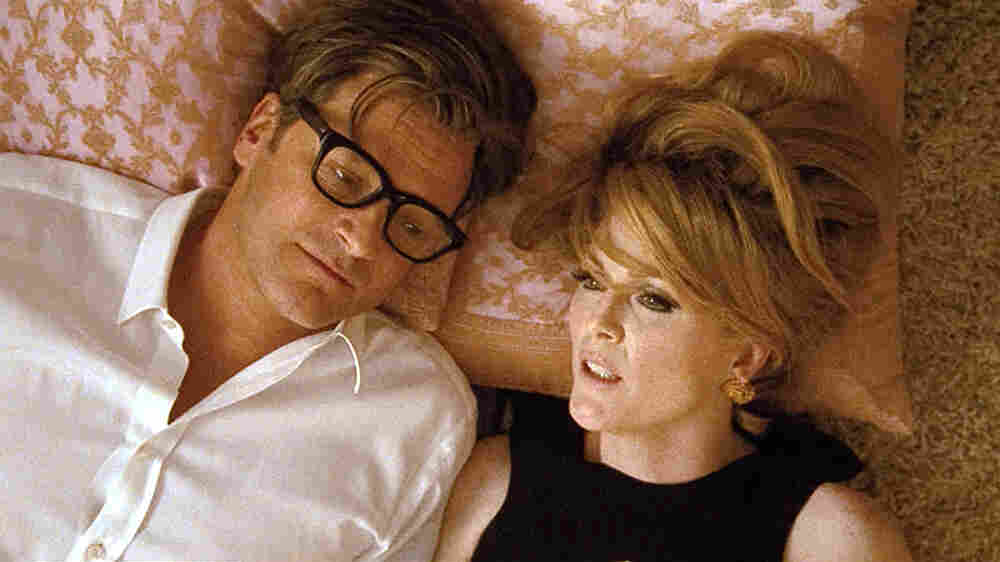 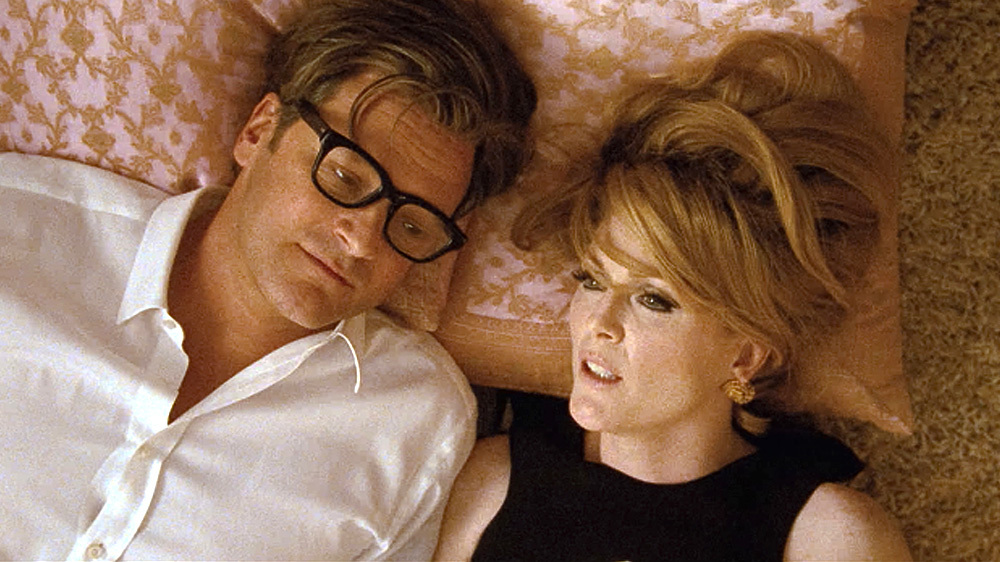 Love's Loss: Colin Firth (with Julianne Moore) plays George Falconer, a closeted British professor in 1960s Los Angeles grieving over the sudden death of his partner. Unable to cope with the despair of his solitude, Falconer plans to end his life.

An exquisite, almost sensual grief suffuses every frame of A Single Man, Tom Ford's artful adaptation of a novel about a surreptitiously grieving English professor in Los Angeles.

Surreptitiously grieving? Yes: George Falconer (Colin Firth) has been in mourning for months, but scarcely anyone knows it, because the year is 1962, and for George to let on what he's feeling would be an admission that the friend who's died in a car crash was more than a friend.

And Jim (Matthew Goode) was, in all but name, George's spouse. They'd lived together for 16 years before the accident on a snowy road that killed him. What we glimpse of the two men in flashbacks suggests that their easy, comfortable relationship is what gave George's life purpose — something his dry day-to-day existence now lacks.

Surrounded by people but lonely and alone, George might as well be invisible; he's a gay man in a world that acknowledges homosexuals only when it raises its voice to condemn them. So he leaves things unsaid with neighbors and colleagues, and speaks in a kind of code to his students, talking about prejudice, social stigmas and various flavors of '60s fear.

It goes right over their heads, for the most part, though one of George's quicker pupils (Nicholas Hoult, grown lanky and coltish since About A Boy) recognizes what he thinks is a familiar sort of sadness in his professor's eyes and peppers him with questions after class. Otherwise, George remains opaque even to his closest friend, Charley (Julianne Moore, swimming in mascara), who has loved him unrequitedly for two decades without ever understanding him.

Christopher Isherwood's short 1964 novel is the chronicle of a single day in George's life, and while Ford's film also chronicles just the one day, the director has made one significant adjustment: The film's George can find no reason to go on, so he's quietly decided not to. That adds urgency as he cleans out his desk; empties a safe-deposit box at the bank; and appreciates a sunset and a blossom and the smell of a dog's fur as if for the first time.

Ford, who has heretofore been celebrated chiefly as a designer of clothes — the man who revived the Gucci fashion house, then went on to start one of his own — makes, as you might expect, a stylish filmmaking debut with A Single Man. He's visualized Isherwood's story so elegantly — with a designer's eye, every shot precisely framed — that for a time it seems he might actually be making the film too stylish. Sleek '60s threads, a house out of Architectural Digest, a billboard for Hitchcock's Psycho backing an encounter with a prostitute (Jon Kortajarena) who looks like a model — the picture-making is so tightly art-directed it initially feels a little airless.

But the beige-on-gray visuals glow with warmer colors when emotions flare, and you realize that this first-time director has decided to make style strategic. George is a man who manages his feelings, and visualizing him in such pristine terms lets Ford highlight the tiniest of gestures: the finessing George does to navigate a can't-ask-can't-tell world; the veiled '60s hints and glances that would never even register today; and the glimmers of hope that flare unexpectedly at the edges of despair.

For A Single Man, despite all George's grief, is centrally about someone who's finally learning to live in the moment — a moment that has been made, on screen, at once wrenching and ravishing. (Recommended)