Accessibility links
What's Next From Apple? Bloggers Hunt For Clues There's a whole set of bloggers who write about Apple products — especially what could be coming. One talks regularly to industry sources and combs through the company's patent filings, lawsuits and job postings. Marketing experts say the attention is great for the company. 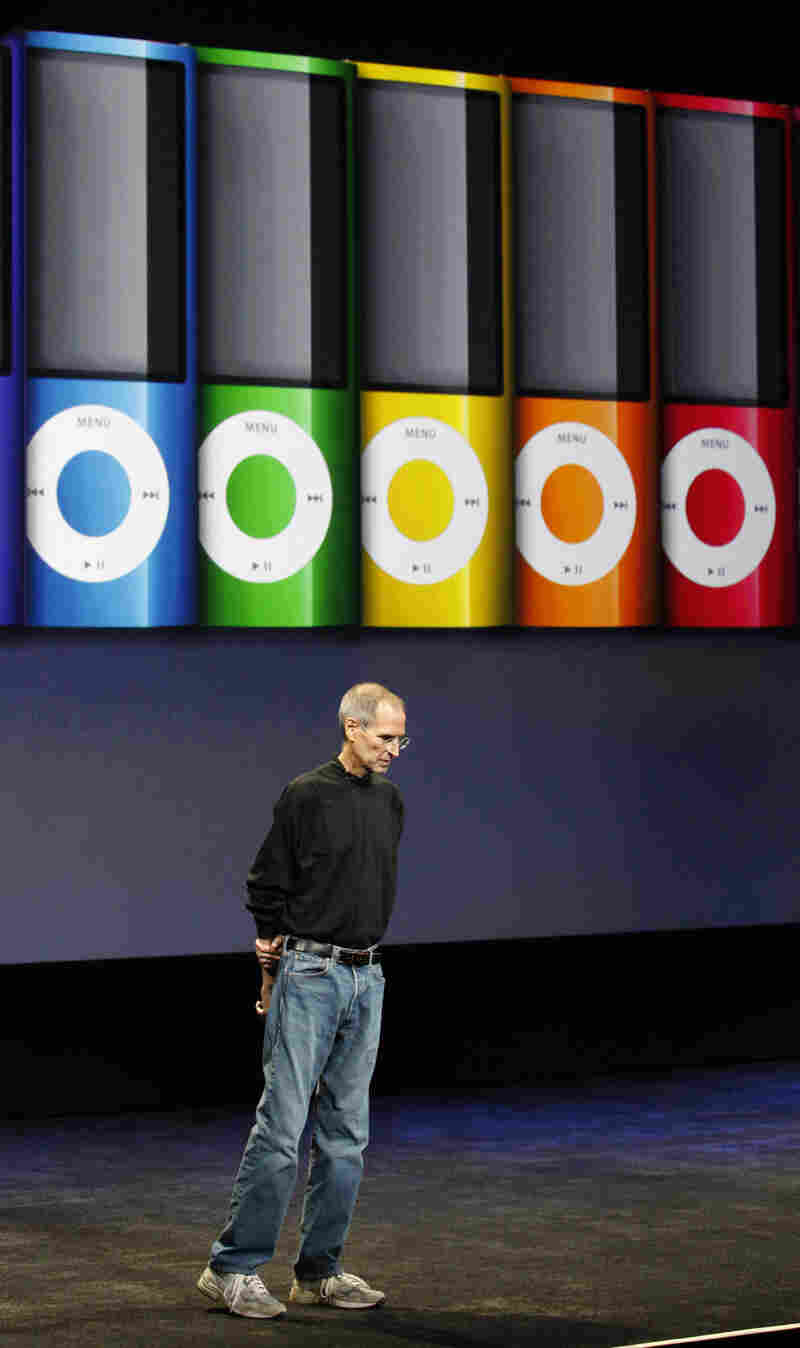 Apple CEO Steve Jobs speaks at an Apple event in San Francisco in September. Because Apple is known as fairly secret, bloggers follow the company's every move — and try to unearth product news before the company releases it. Jeff Chiu/AP hide caption 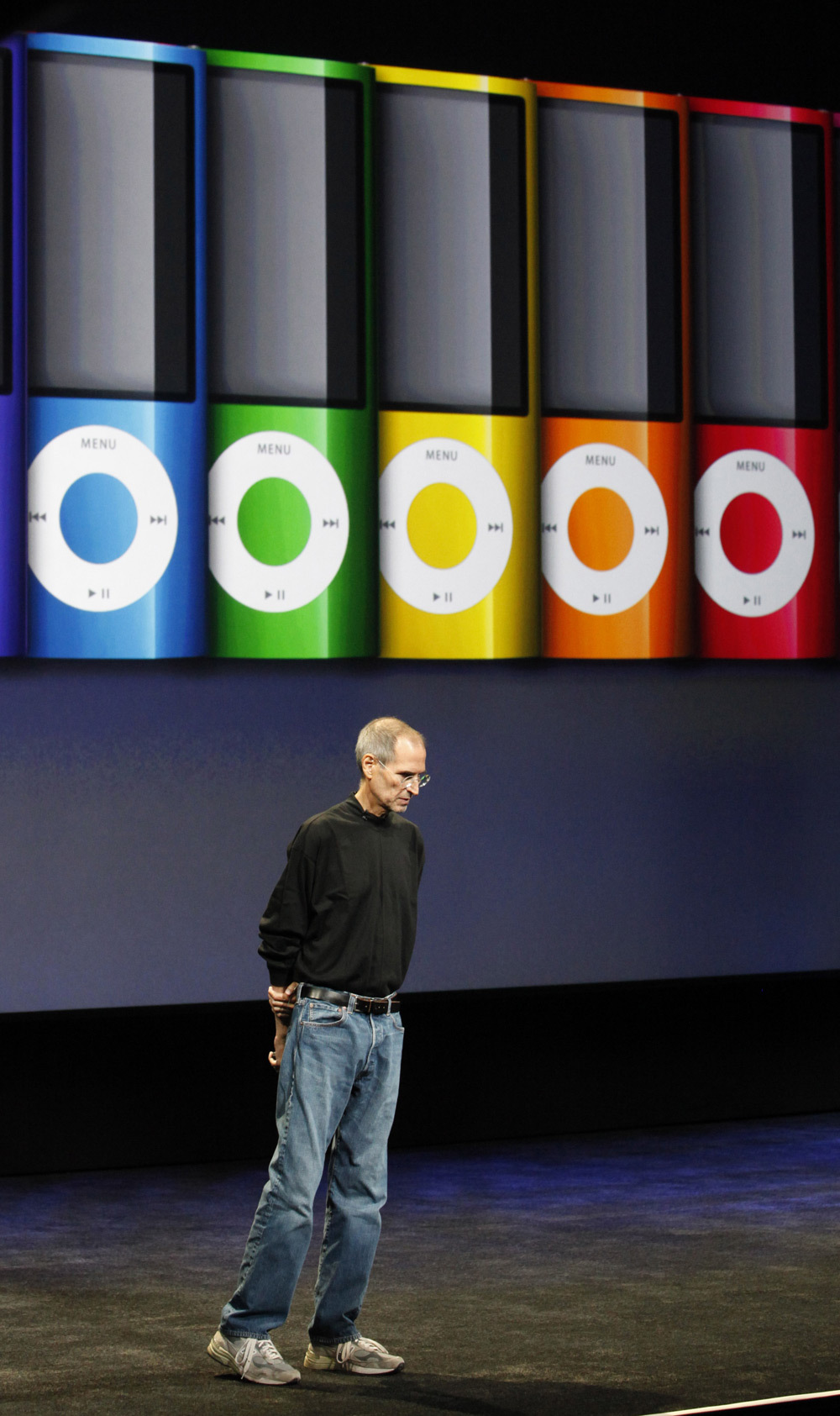 Apple CEO Steve Jobs speaks at an Apple event in San Francisco in September. Because Apple is known as fairly secret, bloggers follow the company's every move — and try to unearth product news before the company releases it.

John Gruber says that when he meets new people at holiday parties and family gatherings, he struggles with what seems like a simple question: "What do you do?"

"The short answer is that I'm a writer," he says. "And then if they say, 'What do you write?' it gets a little complicated."

Gruber is not a conventional journalist. He works from his home in Philadelphia writing a technology blog called Daring Fireball. It's almost exclusively about Apple — and often about soon-to-be-released products.

One reason his job is complicated is that he often writes about products that may or may not exist. Consider the Apple tablet. Rumors are circulating that when this device is released it will revolutionize the way we read newspapers. But so little is known about it, even its name remains a mystery. Some reports say it will be called the Newton instead of the Tablet, and it will be something like a 10-inch iPhone. Or it could be 6 inches.

In one posting, Gruber described what the tablet might look like. And yet, he says, Apple has never announced it.

"Apple has never said one single word about ever producing a new tablet computer," he says. "This is entirely speculation."

Apple is known for this cult of secrecy, and a whole industry of bloggers like Gruber has sprouted up around it. He describes himself as the Roger Ebert of the industry — mostly a critic of Apple products.

Read The All Tech Considered Blog

Apple's Web Worms
The Internet Says Apple Has A Tablet Up Its Sleeve; Is It True This Time?

But some of his peers pride themselves on their investigative reporting. Neil Hughes works for AppleInsider with a team of eight other reporters in Punta Gorda, Fla. They compete with sites like MacRumors, Boy Genius Report and MacDailyNews to break stories about Apple products.

"This summer, for some reason, people kept thinking that [the tablet] was coming out this fall, and our sources told us, 'No way, no how. It's not coming out until the first quarter of 2010,' " AppleInsider's Hughes says.

Hughes talks regularly to sources inside the industry. And every week he combs through Apple's latest patent filings, the lawsuits filed against the company, and the job openings it has posted, looking for any hints about product developments.

Many of these bloggers sustain themselves through advertising. They say they've seen steady growth in the appetite for Apple news. As one writer put it, "People just eat this stuff up."

No doubt Apple has been irritated in the past when details have leaked about upcoming products. But marketing experts say the public relations these bloggers give Apple is ultimately great for the company.

"Blogs are only probably four years old in the scheme of the world, but leaking news to the press about something that's upcoming has always been a relatively useful tactic for generating consumer interest," says Robert Passikoff, a brand strategist at the company Brand Keys.

There is no evidence that Apple purposefully leaks news to the press. But Passikoff says he thinks Apple cultivates speculation about its products. Plus, he says, people have personal relationships with their iPhones and iPod Touches. They feel these devices understand them.

"On an unarticulated, but very emotional basis, [consumers think], 'How did they anticipate what I wanted?' " he explains. Passikoff says people can't wait to find out what else Apple is going to tell them they want.

When asked if he ever feels like a pawn in Apple's free PR scheme, Gruber, who writes Daring Fireball, says it's more complicated than that.

"While it does work out well for them, I don't really think it's quite cultivated," he says.

Gruber says bloggers like himself are just a byproduct of Apple's groundbreaking design. He thinks it makes sense that journalists would cover significant developments in technology. Plus, he says, he has a job he loves: Making good money writing about a fascinating subject.