Accessibility links
Real ID Act Might Cause Real Hassles For Travelers With a Dec. 31 deadline looming, many states have yet to comply with the Real ID Act, which sets tighter — some say impossible — standards for issuing drivers' licenses. If a resolution is not reached, travelers may face long lines at airports if they can't use their licenses as identification. 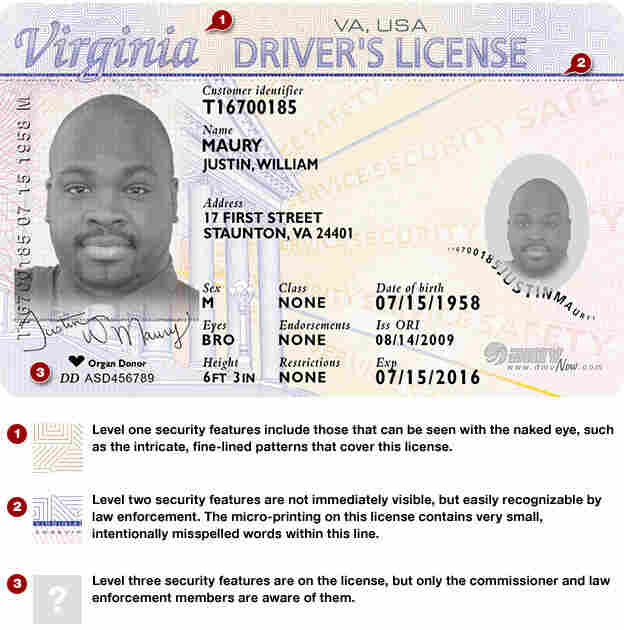 In spring 2009, Virginia began issuing ID cards with advanced security features. Some of the features helped the state edge toward Real ID compliance while others were made with enhanced security in mind. Real ID compliance requires identification cards to contain Level one, two and three integrated security features, described above. Click on the graphic above to read more. Courtesy of Virginia Department of Motor Vehicles hide caption 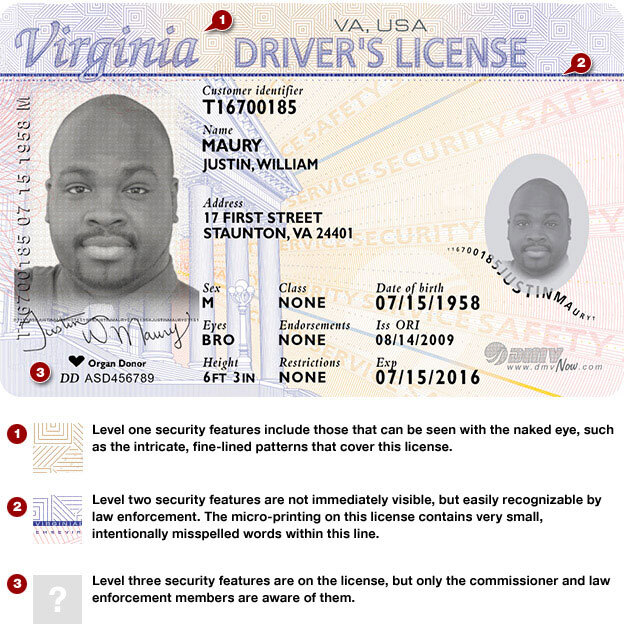 Less than four weeks from now, by the close of 2009, states must be in compliance with the Real ID Act, which sets new and tighter standards for issuing driver's licenses. But some three dozen states have yet to put the new requirements in place.

In fact, the Department of Homeland Security says no state will be in full compliance by the end of the year. Without that compliance, travelers might face long lines at airport security checkpoints if they can't use their licenses as identification.

The Real ID Act was approved in 2005 to address one of the concerns of the 9/11 Commission: that driver's licenses were too easy to obtain.

The law set up some exacting standards for licenses. Applicants would be required to submit birth certificates and states would have to verify them. And an applicant's immigration status would have to be validated.

But states have long had problems with Real ID. There's the cost — some $ 4 billion, most of which states have to find themselves.

And states say some of the standards are impossible to meet. For example, no database exists on a national level to check birth certificates. Nor are the states able to share driver's records with each other, something else Real ID requires.

"States have argued about Real ID since its inception," says David Quam of the National Governors Association, "that this cannot be done, that it's too costly and that it mandates too many specifics. We can do it better."

In fact, 13 states have passed laws prohibiting full compliance with the Real ID Act on the basis of cost or privacy issues.

Doing it better, as far as the states are concerned, means an alternative piece of legislation, called Pass ID. It's like Real ID but with some key differences. Birth certificates wouldn't have to be electronically verified. And there would be federal funds to help states pay for the changes.

Pass ID has been approved by a Senate panel but has not yet made to the floor, and with health care taking up the Senate's time, the prospects for Pass ID appear dim in the coming weeks. At a hearing last week, Democratic Sen. Tom Udall of New Mexico pleaded with Homeland Security Secretary Janet Napolitano to extend the Dec. 31 deadline.

"The uncertainty surrounding what your department may or may not do if the legislation is not signed into law is creating confusion for people in the states that are not in compliance," he said. "This is causing a great deal of anxiety with constituents who are seeing news reports they'll need a passport in order to travel on a commercial airline in the U.S. after the first of the year."

Extension Is Not The Answer, Napolitano Says

Napolitano, the former governor of Arizona, is sympathetic to opponents of Real ID. In fact, she used to be one herself. But she says waiving the law's requirements, as was done last year, is the wrong way to go.

Under the current provisions of Real ID, travelers from states not in compliance with the law would, among other things, not be able to use their driver's licenses as IDs to board commercial flights. That would cause massive travel disruptions during the holiday season, requiring additional screening of virtually all travelers. No one expects that to happen. But like Napolitano, the governors want to see the new law approved, rather than once again extending Real ID's deadline.

"It appears it could be extended again, but really, you're putting a Band-Aid on a pretty big open wound," Quam says. "What the governors have said for a long time is, you need to change the law — the law is flawed."

But time is running out for a congressional fix, which means a last-minute blanket waiver of Real ID is becoming more and more likely.