Accessibility links
Targeting Afghanistan's Opium Market When President Obama unveiled his Afghanistan war strategy last week, he did not dwell on the challenge of getting the country's vast opiate production under control. The U.S. has spent billions on counternarcotics programs in Afghanistan with little success. Scholar Gretchen Peters says interdiction, not eradication, is the new strategy. 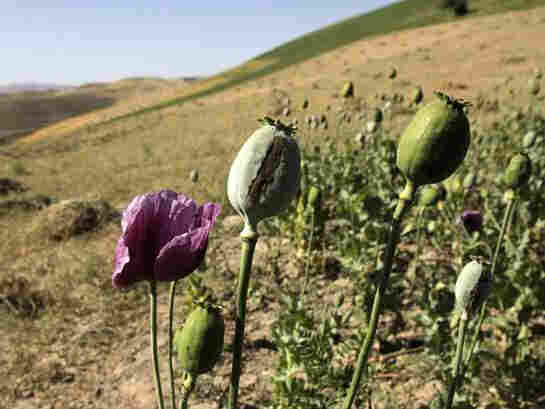 An illegal crop of poppies grow in July in the Badakhshan province of Afghanistan. Julie Jacobsen/AP hide caption

When President Obama unveiled his Afghanistan strategy last week, he did not dwell on the challenge of getting the country's vast opiate production under control.

The U.S. has spent billions of dollars on counternarcotics programs in Afghanistan, with little success. Afghanistan produces more than 90 percent of the world's supply of heroin, and earnings from the drug trade help fuel the country's insurgency.

Helmand province in southwestern Afghanistan is an opium-rich hub. It produces an estimated 90 percent of Afghanistan's total. The U.S reportedly is sending in 9,000 Marines as part of the new surge to that poppy-rich province to stem the flow of drugs.

But will the troops make a difference in the Taliban-controlled areas like Marja, in Helmand province, where opium proliferates?

Gretchen Peters thinks so. She is the author of Seeds of Terror: How Heroin is Bankrolling the Taliban and al Qaeda. Peters tells NPR's Michele Norris: "It's certainly going to make a difference. Degrading the enemy's ability to fund himself is a key aspect of the strategy."

While opium production is not the only stream of income for the Taliban, it is one of the larger ones. According to the United Nations, the Taliban has earned an estimated annual income of $125 million from the opiate market since 2005.

When President Obama unveiled his Afghanistan strategy last week, one thing he did not dwell on was the challenge of getting the country's vast heroin production under control.

The U.S. has spent billions on counternarcotics programs in Afghanistan, with little success. Afghanistan supplies 90 percent of the heroin in the world, and the funds from the drug trade help fuel the country's insurgency.

Gretchen Peters is the author of the book "Seeds of Terror: How Heroin is Bankrolling the Taliban and al Qaeda," and she joins me here in the studio.

Ms. GRETCHEN PETERS (Author, "Seeds of Terror: How Heroin is Bankrolling the Taliban and al Qaeda"): Thank you.

NORRIS: How did we get to the point where Afghanistan controls 90 percent of the world's heroin supply? How did that happen?

Ms. PETERS: Well, it's a long time in coming. Previously, most of the world's heroin was produced in Burma and Southeast Asia, and some of it in Latin America. Latin America is still the source for most of the heroin sold on the streets of the U.S., for example. But Afghanistan, since the 1980s, has become a major producer of opium poppy and heroin labs more recently have moved into the border areas. Previously, they existed inside Pakistan or as far away as Turkey. And so the smugglers would move the opium from the region.

But it's really globalized. I mean, crime has globalized the same way other industries have. So the poppy is grown in Afghanistan. It's processed into heroin along the borders. It's smuggled out through Pakistan and Iran. The money is laundered in the Middle East. This is not just Afghanistan's problem anymore.

NORRIS: The U.S. has reportedly spent more than $800 million a year on counternarcotics programs in Afghanistan. Earlier this year, U.S. envoy Richard Holbrooke said that, this was the most wasteful and ineffective program I have ever seen in 40 years. That was him speaking.

What went wrong there?

Ms. PETERS: Well, under the Bush administration, the focus was on eradication. And the Bush administration wanted to implement an aerial spraying campaign that would have wiped out Afghanistan's poppy crop. Since the Afghan government didn't allow that to happen, instead, a enormously expensive ground eradication program was put into place. It destroyed something in the range of 10 to 15 percent of the drug crop every year. It was extremely dangerous for those who took part in it; dozens were killed. And they really didn't succeed in making much of a dent in the poppy crop.

What I was arguing in my book, and has seems to now being implemented by the Obama administration, is that the real money in drugs is not at the farm level. The real money is once the drugs get to the drug labs and get partially refined. So the focus needs to be put on the very few number of people at the top of the drug trade. And there are people who are very closely connected to the drugs trade who are supposedly our allies in Afghanistan and Pakistan; people who are working within those governments.

NORRIS: Gretchen Peters, we hear about areas like Marja in Helmand where the Taliban are in control. And a lot of the new Marines that are going to be heading to Afghanistan are expected to actually go into that region.

Will hitting a place like Marja make a big difference?

Ms. PETERS: I think it's certainly going to be part of what makes a difference. There was an operation earlier in 2009 in Marja, when coalition troops and Afghan forces overran a Taliban base that was within an opium market. And they seized 91 metric tons of heroin, opium, hashish, poppy seeds and precursor chemicals. And that is just a staggering quantity to be found in just one Taliban hideout.

Ninety-one tons, I mean, the "French Connection," if you remember that movie, was at the time was the largest heroin seizure in U.S. history and it was about 43 kilos. We're talking about 91 metric tons. That's just a staggering size.

And Marja, while it is considered to be large, is probably not even the biggest base of operations where the Taliban and drug traffickers work. It's actually the town of Baramcha on the border between Afghanistan and Pakistan that might actually be even bigger. And I've been told by American forces operating down there that they don't even have the capacity to push down that far. Marja is only about 17 miles south of the capital, Lashkar Gah.

I mean, we're talking about a region that is - and a drug operation with a supply chain that would make Wal-Mart proud. This is an organizational feat of the highest order. And I still think that coalition forces really don't have a full understanding of just how powerful an organization they're up against.

NORRIS: Gretchen Peters is the author of book "Seeds of Terror: How Heroin is Bankrolling the Taliban and al Qaeda."

Gretchen Peters, thanks so much.

Ms. PETERS: Thank you for having me.

NORRIS: Tomorrow, we continue this conversation and talk about what's being called the chemical jihad, an effort by Muslim gangs to make addicts out of what they call infidels in the West.