Accessibility links
Classics Off The Beaten Path In 2009 In keeping with the musically offbeat direction of his weekly show ("The New Releases") on Minnesota Public Radio, host Michael Barone introduces 10 overlooked but excellent classical albums from 2009.

Rather than compile a list of the past year's high-profile, star-driven classical releases, I've chosen some hidden surprises — delectable items which might not otherwise pop up on many people's radar, but which deserve (and reward) attention. I've always taken more pleasure in listening to something a bit different, rather than making exhaustive comparisons among multiple iterations of standard repertoire. The soul may respond to a particularly felicitous new rendition of Beethoven's Fifth, but why not venture into uncharted territory and bring home some fresh fruit? 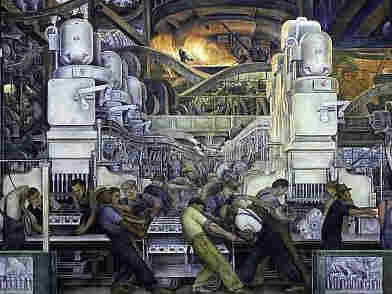 A mural by Diego Rivera graces the cover of the Detroit Symphony's release of MotorCity Tripych by Michael Daugherty. naxos records hide caption

Michael Barone is the host of the public radio programs Pipedreams and The New Releases. Click here for more entries in our Best Music of 2009 series. 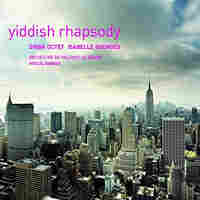 It may be something in the water. From the Basque region in the southwest corner of France comes this surprise find: a live-concert recording that conveys an electric energy shared by musicians and audience in this "improbable encounter between a group of classical musicians who play Yiddish music, a singer with a passion for musical comedy and jazz and an excellent regional symphony orchestra." If Yiddish is the language of the heart, plenty of heart is revealed in unbuttoned performances that transcend kitsch and glitz, friendly music of and for the kosher soul. Better than chicken soup. 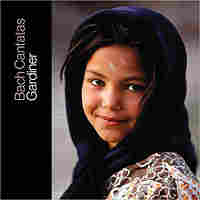 The sheer scope of the project still boggles the mind: to perform and record in concert nearly 200 of J.S. Bach's cantatas during a single year of artistic pilgrimage throughout Europe and into the U.S. (marking the 250th anniversary of Bach's death in 2000). That conductor John Eliot Gardiner's team was able to accomplish it at such a consistently high level of involvement is nearly unbelievable, but the documentation, in gorgeous book-quality packages, is undeniably fine. Such an outpouring of infinitely imaginative genius Bach lavished on these pieces. The pastorale aria from Cantata 92, recorded at the Grote Kerk in Naarden, the Netherlands, and touchingly sung by soprano Miah Persson with oboist Susann Regel, may sum it up: "I shall remain true to my Shepherd." Indeed, Bach did, and these musicians do, too. 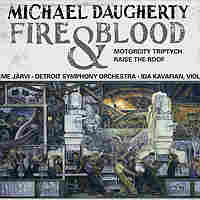 3. 'Assembly Line' (from Fire and Blood, for violin & orchestra)

Michael Daugherty often draws upon the American popular music vernacular for his harmonic and rhythmic building blocks. The Violin Concerto was inspired by the famous "Detroit Industry" Depression-era murals by Diego Rivera, and the resulting score bristles with energy. The three trombone soloists in the final panel of the Motor City Triptych evoke the impassioned delivery of African-American preachers, as experienced by the composer while he attended a church service in Detroit with Rosa Parks. The Detroit orchestra shows its mettle in these well-recorded concert performances. 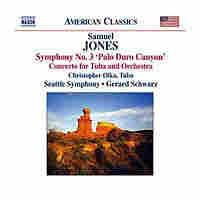 Since I cut my teeth on Tubby the Tuba (the original version) and played sousaphone in high school, you can imagine my delight in finding that Samuel Jones (a distinguished faculty member at Rice University, more recently composer-in-residence for the Seattle Symphony) had created a heavy-hitting, world-class concerto for this neglected yet importantly resourceful and expressive instrument. And, heavens, can Chris Olka make it soar and sing. The Symphony No. 3, subtitled Palo Duro Canyon, depicts one of nature's wonders, an awesome surprise in the midst of a banal Texas landscape, considered sacred by Native Americans. Jones captures its visual, geological and spiritual drama in his almost cinematic score, and Gerard Schwarz conducts both scores with passion. 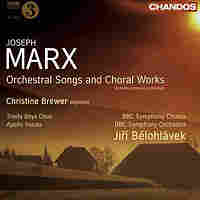 Think Richard Strauss (for orchestral color and melodic gesture) and Hugo Wolf (for directness of delivery and poetic nuance) and you get the idea. Joseph Marx was the last, staunch advocate of Viennese romanticism, a powerful critic and revered teacher who still followed Beethoven's directive of music "from the heart, to the heart." These songs represent a beautiful, if not timeless (well, some come close) elegance that persisted against the modernist trends of the early 20th century. From our point of remove, that friction hardly matters, and we simply applaud the Chandos label for encouraging exploratory listening, and Christine Brewer for a voice that makes the spirit swell with pleasure. 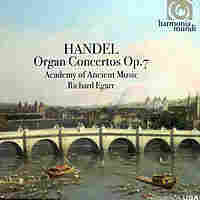 Devised as a promotional magnet to bring audiences to his oratorio productions, Handel's organ concertos proved their popularity immediately, and have continued to delight listeners and challenge soloists. Handel left many sections (particularly in this later Op. 7 collection) with the marking "ad libitum," the talent for improvising being one of his many skills, but one often lacking in players of our time. Richard Egarr here addresses that challenge with numerous spontaneous and imaginative preludes, bridges and embellishments. His period-instrument band, and the little period-appropriate chamber organ by Goetze & Gwynn, make sounds such as Handel would have enjoyed, and the results are totally beguiling. 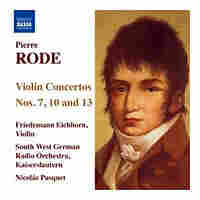 Pierre Rode, one of the foremost violinists of his time (for whom Beethoven composed his Sonata, Op. 96), wrote the book on violin technique for the Paris Conservatoire. His studies are still practiced by aspiring virtuosos, and though championed by Wieniawski (and several by Paganini!), Rode's 13 excellent concertos now are almost totally forgotten. Friedemann Eichhorn's exceptional and compelling artistry rescues three of them from undeserved oblivion. Yes, perhaps it's Beethoven-lite, but sometimes that's not a bad thing. The dance-inspired finales are particularly memorable. Enjoy the discovery. 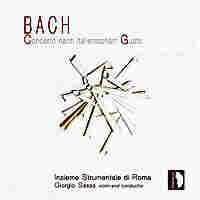 Most interesting among the five instrumental concertos here is Salvatore Carchiolo's imaginative re-creation of Bach's Italian Concerto (originally for solo harpsichord) as a concerto grosso for a small orchestra in which various individuals get occasional solos. Bach's skill in adapting Italian models to his thoroughly German understanding of counterpoint is but one evidence of his own genius. Carchiolo's arrangement gives us a "Seventh Brandenburg Concerto" with superb playing and recorded sound. Everything else here is top quality, in zesty performances. 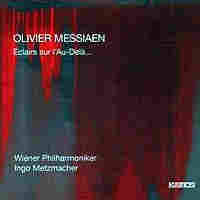 Ned Rorem, an atheist who "believes in belief," has written many effective pieces for church choirs. How much more compelling and confounding, then, is Olivier Messiaen's music, the result of one who "in the truths of the Catholic faith... found this seduction by the wonderful multiplied a hundred, a thousand fold... something that [to him] is true." In his last major orchestral composition (premiered in 1992 by the New York Philharmonic), Messiaen takes stock of the components of his musical style -- dynamic color, mystical spirituality, jagged rhythm, raucous dissonance, unctuous sweetness and vibrant birdsong (the 9th movement is a freeform visit to a well-stocked aviary) -- and addresses the cosmos. Or, rather, brings it to us, and us to it. Conductor Ingo Metzmacher, who made his Vienna Philharmonic subscription debut with this piece (brave man!), suggested to the orchestra after the dress rehearsal that the only way to understand and appreciate this music is to set aside "earthly" concerns and give oneself to the experience. Is that not faith itself? 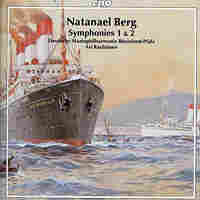 The Swedish composer Natanael Berg grew up in a musical home and studied composition and performance, but nonetheless graduated with a degree in veterinary science. Even so, he worked inexhaustibly as founder of the fledgling Swedish Composer's Association, and his output includes five symphonies, four operas and three ballets, all of them showing his thorough capability and imaginative instinct. Listening to this expressive, richly romantic music, you'll wonder why you've never before heard of Natanael Berg. His Symphony No. 1 was begun early in 1912, with the notion of covering the four ages of man -- early striving, love, the pleasures of adulthood and happy old age. But in the midst of work on the finale, the Titanic sank, and news of this tragedy stirred Berg to a remarkably direct and effective portrayal of the disaster and its emotional aftershocks. I know of nothing quite like it anywhere -- disturbingly and satisfyingly effective. The companion Symphony No. 2 (Four Seasons) is a welcome alternative to Vivaldi, too.