Accessibility links
New Mexico Dairy Pollution Sparks 'Manure War' The New Mexico Environment Department reports that two-thirds of the state's 150 dairies are contaminating groundwater with excess nitrogen from cattle excrement. While no one wants to drive the milk cows out of the state, many want the dairies to clean up their act. 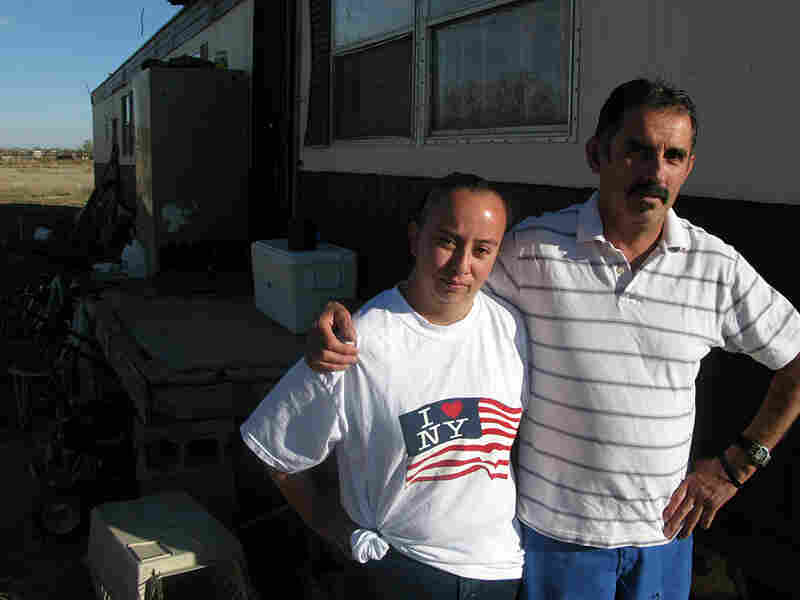 Herbie Rodriguez and his daughter, Erica, say the well water at their home in Dexter, N.M., has been contaminated by dairy runoff. John Burnett/NPR hide caption 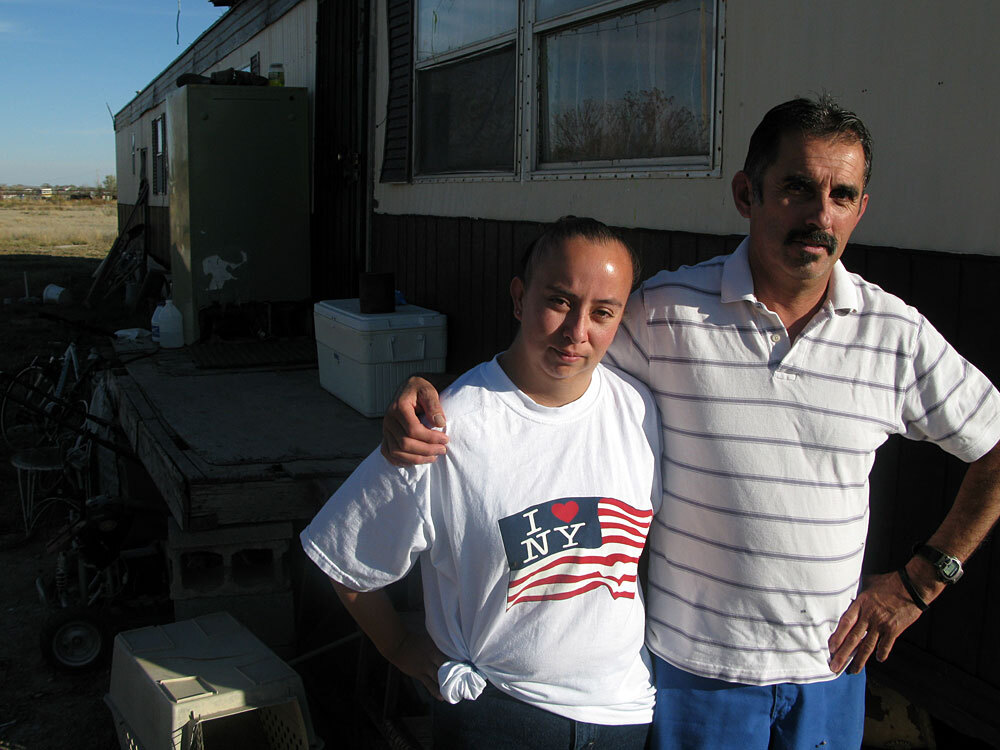 Herbie Rodriguez and his daughter, Erica, say the well water at their home in Dexter, N.M., has been contaminated by dairy runoff.

The picture on many milk cartons shows cows grazing on a pasture next to a country barn and a silo — but the reality is very different.

More and more milk comes from confined animal feeding operations (CAFOs), where large herds live in feedlots, awaiting their thrice-daily trip to the milking barn. A factory farm with 2,000 cows produces as much sewage as a small city, yet there's no treatment plant.

Across the country, big dairies are coming under increased criticism for polluting the air and the water. In New Mexico, they're in the midst of a manure war.

Everyday, an average cow produces six to seven gallons of milk and 18 gallons of manure. New Mexico has 300,000 milk cows. That totals 5.4 million gallons of manure in the state every day. It's enough to fill up nine Olympic-size pools. Every single day.

First, workers hose the muck off the concrete floor of a milking barn, and it flows into a plastic- or clay-lined lagoon where the liquid evaporates.

Second, waste from the feedlot where the cows live is collected and used as fertilizer for grain crops.

But the New Mexico Environment Department reports that two-thirds of the state's 150 dairies are contaminating groundwater with excess nitrogen from cattle excrement. Either the lagoons are leaking, or manure is being applied too heavily on farmland.

"As we get more and more monitoring data, what we see is that more and more dairies have contamination underneath them. So something isn't working about those facilities," says Marcy Leavitt, director of the department's Water and Wastewater Division.

The problem is worsened by the tendency of large dairies to cluster together.

On Dairy Row along Interstate 10 between Las Cruces, N.M., and El Paso, Texas, more than 30,000 cows live in 11 farms located one after the other.

In the past four years, the EPA has repeatedly cited these dairies for violating the Clean Water Act because manure-laced stormwater was washing into tributaries of the Rio Grande.

"You hear it often in community meetings. People describe that maybe five, six, seven years ago they could go out in front of their home and enjoy the afternoon, eat some food," says community organizer Arturo Uribe, who lives in Mesquite, Texas, which is in the middle of Dairy Row. "But now what these folks are saying is when they go out there, there's too many flies."

Even more serious than odor and flies is the threat to the watershed. In the town of Dexter, in southeastern New Mexico, a dozen residential homes are surrounded by sprawling dairies on three sides.

Homeowner Herbie Rodriguez says he has been buying five-gallon bottles of water to drink and cook with, though his family still washes with contaminated well water.

"We were told that we couldn't drink the water because it's contaminated," Rodriguez says. "On a white, brand-new T-shirt, you can wash it in the water, brand-new, it would come out brownish, beige. That's how you could tell how bad the water was."

The trend in the dairy industry, like the rest of commodity agriculture, is toward fewer and larger farms, which concentrates more manure in smaller geographic areas. Citizens are reporting dairies contaminating ground and surface water across the nation — in the Yakima Valley in Washington; Brown County in Wisconsin; Hudson, Mich.; and now Dexter, N.M. 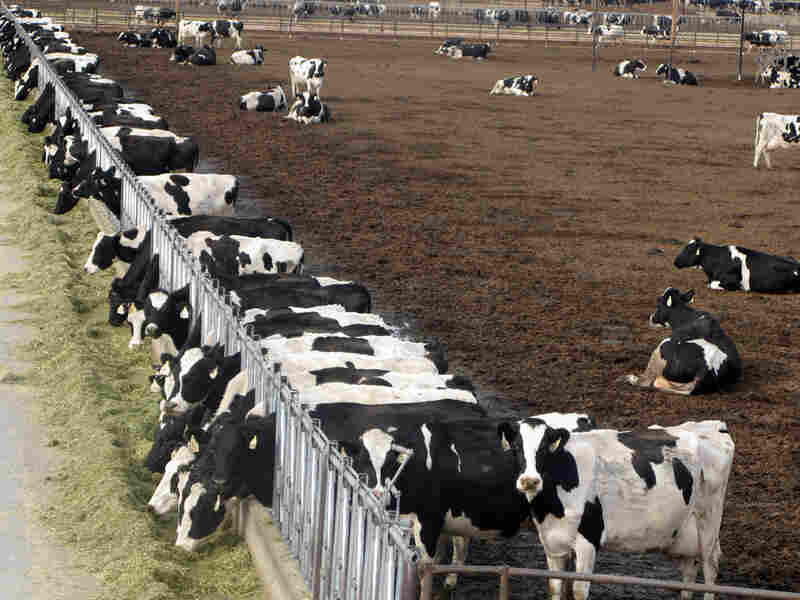 But critics point out that dairy cows in New Mexico are not fed in pastures; they live in confined animal feeding operations like this one. John Burnett/NPR hide caption 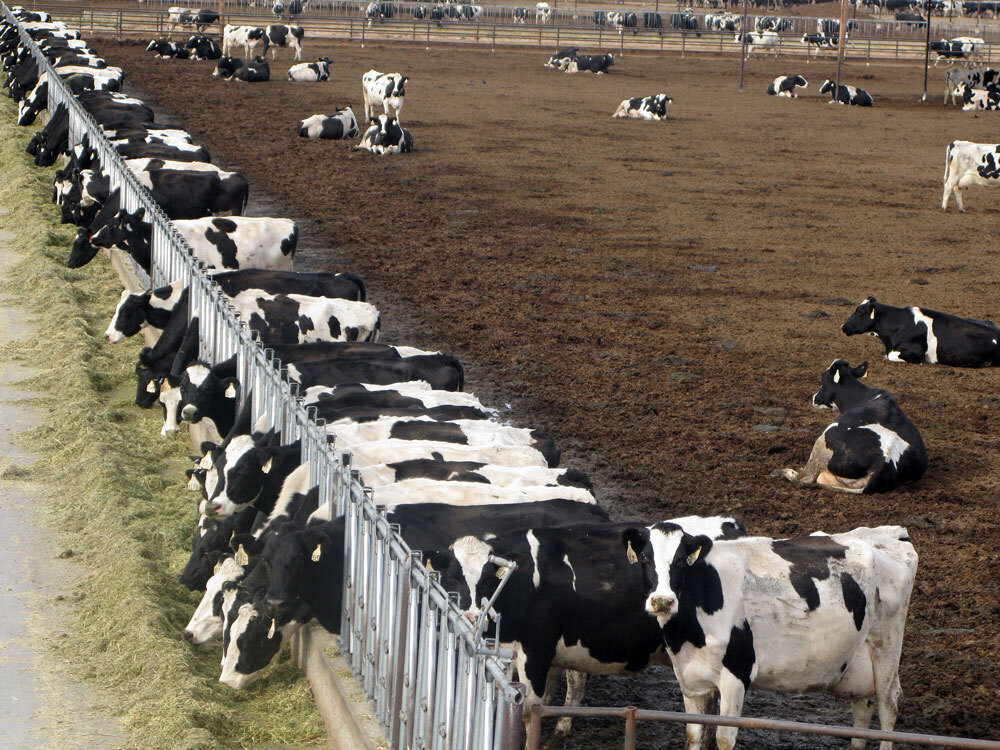 But critics point out that dairy cows in New Mexico are not fed in pastures; they live in confined animal feeding operations like this one.

In many places, the powerful dairy lobby blocks tough state regulations, and the federal EPA lacks broad powers to crack down on agricultural runoff. But in New Mexico, the winds might have begun to shift.

The Winds Of Change

Among state regulators, there's no question who's to blame for fouling the groundwater in Dexter. The water table is shallow in this part of the state, and monitoring wells downgradient of the dairies all clearly show excess nitrates. The dairies are under state abatement plans to control manure runoff.

"They may have a septic tank that's leaking. That is the No. 1 reason why domestic wells in New Mexico are contaminated," Hagevoort says. "With that, I'm not saying there's not issues and we're not working on some of these dairies. Dairymen are very adamant about being a good steward to the environment. They want to make sure that their families that live on these dairies can drink that water, can bathe in that water and their animals are healthy as well."

And no one wants to drive the milk cows out of New Mexico. Dairies contribute an estimated $1.2 billion to the economy in a poor state with little private industry. Even Rodriguez, whose well water is contaminated, works at a dairy.

But after decades of acceptance, there's a sense here in the state that the dairies' free ride is over.

New Mexico is currently in the process of rewriting and tightening regulations for dairy discharge permits. This year — for the first time ever — the state rejected a proposed dairy in the town of Caballo after citizens protested that it would pollute the Rio Grande watershed.

'The Right Thing To Do'

Pro-dairy billboards have sprouted around the state. One shows a family watching cows graze on green pastures with the message: "Caring for our land isn't easy. But it's the right thing to do."

Jana Hughes, a homemaker who lives next to a dairy near Hobbs, N.M., and recently formed a group called Citizens for Dairy Reform, was shown a photo of that billboard.

"False advertisement," Hughes says. "I mean, as someone who lives around dairies and knows dairies, that is not how it is. We're talking 2,000 cows confined in a small area, living in their own feces and urine."

Some dairymen try to site their farms as far from civilization as possible. John Woelber built his $5 million, 2,300-cow operation in remote high desert in Valencia County, 10 miles from his nearest neighbor.

"The reason we're out here in the middle of nowhere is so we have no complaints; we have no neighbors that will come up and say, 'You've got too many flies,' or, 'It smells,' " Woelber says.