Accessibility links
Lady Gaga: Most Fascinating Of The Year? On Wednesday night, Barbara Walters interviews her 10 most fascinating people of the year. Among them: Lady Gaga. She's been near the top of the pop charts for more than a year, and she's always interesting TV.

On Wednesday night, Barbara Walters interviews her 10 most fascinating people of the year. Among them: Lady Gaga. She's been near the top of the pop charts for more than a year, and she's always interesting TV. You might have seen her on Saturday Night Live playing a huge white grand piano while wearing a dress that looked like a giant gyroscope. Or maybe on Ellen DeGeneres' show with a smaller gyroscope around her head. 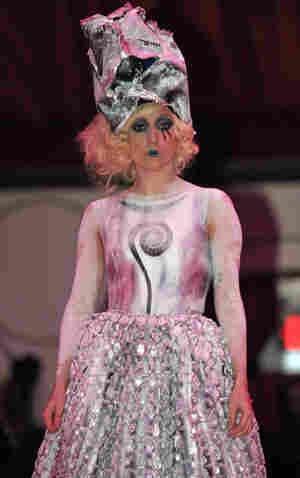 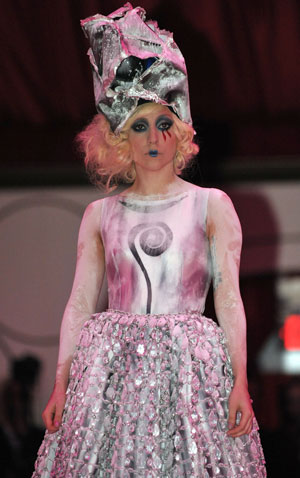 Lady Gaga, during a performance from November. 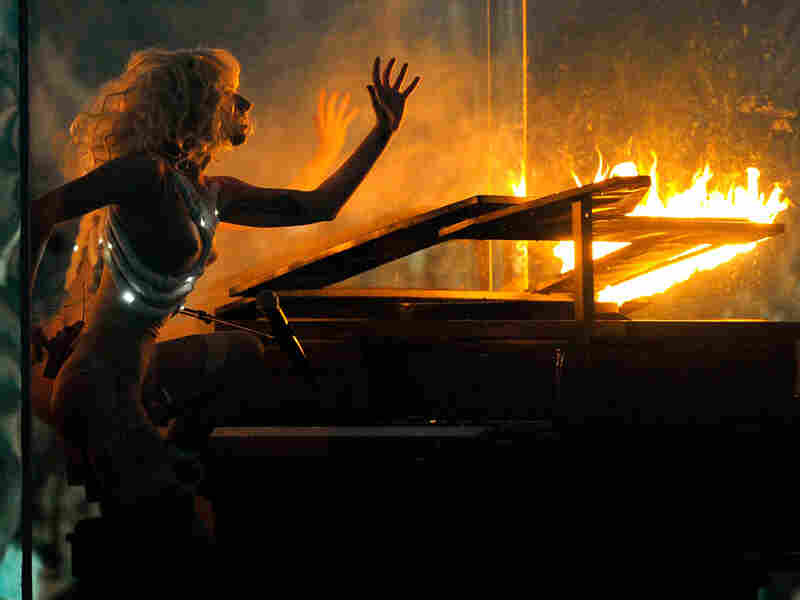 Lady Gaga is scary. She writes dangerously catchy songs that sound like nonsense but eat their way into your brain. She's always dressed in some combination of wigs, sunglasses and — if she wears much else — what looks like half a museum of modern art on her back. At the American Music Awards, she set her piano on fire and belted out a heart-wrenching ballad while smashing wine bottles on the keys.

There's choreographed dancing in her videos, sure, but there are also wheelchairs and homicides, coffins and charred skeletons, the kinds of twisted and shaken visual imagery usually reserved for David Lynch films. She's a one-woman horror movie. We're just not used to turning on the TV and seeing performance art. Pop stars tend to be very straightforward; that's what makes them so likable, how easily they fit into one box or another.

Gaga got her start in the college coffeehouses and underground bars where avant-garde performances are par for the course. But the more albums she's sold, the more she's pushed that artsy aesthetic on a popular audience. It's not just the look that's unexpectedly complex. Even the most dance-floor-friendly Gaga hit has a black hole of fear at its center.

No one really knows what she'll do next. And that, of course, is how rumors get started. Go Google and read all the crazy speculation about how she's really a man, the elaborate story about how she's a Satan-worshipper brainwashing us with her songs, that she's a talentless puppet. The truth might be harder to believe than the conspiracy theories.

At 23, she's already broken Billboard records and sold millions of albums. She writes all her own lyrics and music. She carefully curates her image along with a handpicked group of stylists and artists she's dubbed the Haus of Gaga. She's quite suddenly a very powerful woman in what's still a man's music industry. She's not just selling sex; she's selling art — which may be the most terrifying idea of all.