Accessibility links
What Does the Rise of the Dow Really Mean? The Dow Jones industrial average closed above 14,000 for the first time. But does 14,000 actually mean anything? David Leonhardt, columnist for The New York Times, doesn't think so, since the price of everything rises due to inflation.

Listen
What Does the Rise of the Dow Really Mean?

Euphoria over the Dow Jones industrial average rocketing across the 14,000 mark in response to strong corporate earnings calls into question how rational the exuberance really is.

The Dow Jones industrial average is one of the stock indexes often cited as a benchmark of economic health.

David Leonhardt: "The idea that the Dow has reached 14,000 really isn't particularly meaningful for a couple of reasons; and the first is that the idea that stocks are rising shouldn't particularly be newsworthy because the price of nearly everything rises, thanks to inflation. The government prints more money each year, and the price of bread and cars and stocks rise."

What about the idea that the Dow Jones industrial average represents, what, is it 30 companies? If you were going to look at economic health based on stocks would you do better to look at the Standard & Poor's index which is 500 stocks? Would that be a better measure?

"It absolutely would be a better measure. The Dow is a really interesting statistic. It was invented in the 19th Century by a man named Charles Dow. And when he invented it we didn't have nearly the sophisticated economic tools that we have today. So he actually invented a fairly rudimentary statistic. According to the Dow, a company like Caterpillar, which makes farm equipment and isn't actually that a big of a company, counts more towards the Dow and is considered more important than Microsoft, or Citigroup, or General Electric. And so while there were reasons for Charles Dow to do what he did, there really is no good reason for the rest of us to use the Dow as the main benchmark of the stock market."

You also write in your column this week that the stock market's recent highs don't tell us much about the health of investments either. Why is that?

"The S&P 500 adjusted for inflation is actually still 17 percent below the peak that it reached in 2000. Now if you do a slightly more complicated calculation and you include the dividends that people make on their S&P 500 mutual funds, and you include the typical fees they have to pay, it's only 8 percent below its peak. But that's no record high.

"So the idea that that the stock market has never been better, which is really the implicit message in 'record-high stock market,' really isn't true."

You don't necessarily get rich investing in the stock market. What you mainly do is preserve your money, is that right?

"Over long periods of time you make money. If you set aside money when you're in your 20s and 30s and invest it in a diversified way — and don't pay really high fees to mutual fund managers who somehow persuade you that they know more than everybody else — you are likely to get a really nice return over long periods of time.

The thing that I think is unfortunate about all this hoopla surrounding Dow 14,000 is it causes people to think you get a really nice return almost always, and that's just not the way the world works."

Dow Slides Below 14,000 After Earnings Misses 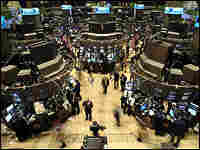 Traders work on the floor of the New York Stock Exchange moments before the closing bell July 19, 2007 in New York City. The Dow closed above 14,000 for the first time finishing at 14,000.41. Mario Tama/Getty Images hide caption 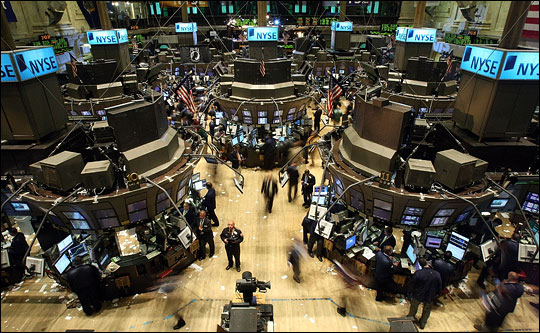 A day after closing above the 14,000-point threshhold for the first time, the Dow Jones industrial average retreated nearly 150 points Friday in response to disappointing corporate earnings and investors taking profits.

"As people start to absorb the numbers and start to see the second-quarter numbers aren't good as the first quarter, that starts to create some pullback a bit," said Nick Raich director of research at National City Private Client Group.

Caterpillar is one of 30 stocks that comprise the Dow and had been one of the best-performing stocks in the Dow, significantly contributing in the blue-chip rally to 14,000. Google is not a component of the Dow Jones industrial average, but its performance is closely watched by investors.

The Dow slid as much as 200 points before trimming losses.

While some investors were taking from the rich market, the below-par corporate earnings caused a bit of panic.

"The strength of economies outside of North America, our broad global footprint and growth in diversified service businesses all helped us deliver higher sales," Owens said.