Accessibility links
Obama Says New Spending Necessary For Recovery In an address, the president says staggering job losses mean the country must continue to "spend our way out of this recession" with a round of new incentives for hiring. 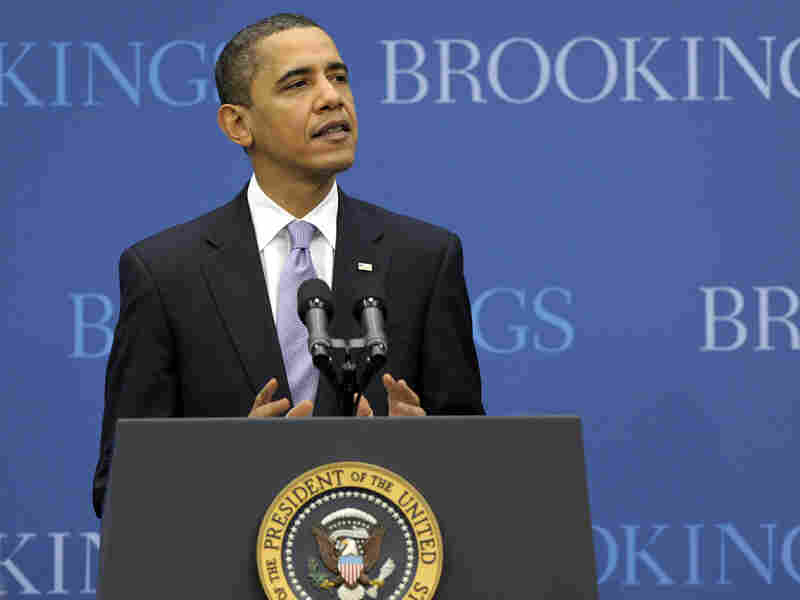 President Obama proposed more money for infrastructure projects, tax cuts and credit access for small businesses during a speech on the economy at the Brookings Institution in Washington, D.C. Susan Walsh/AP hide caption 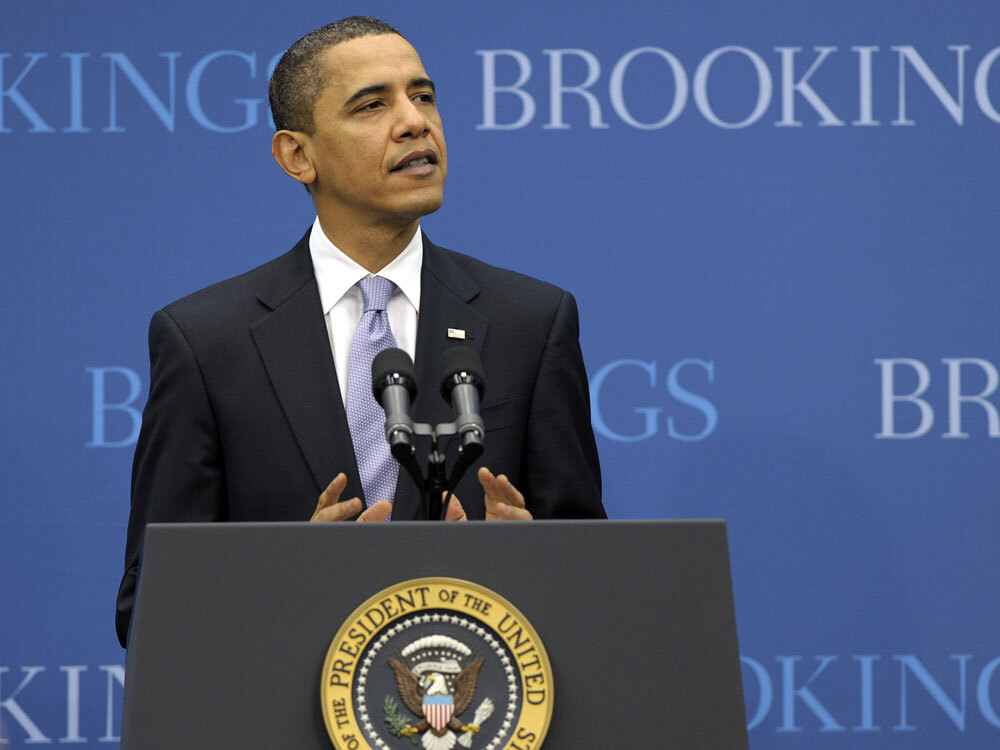 President Obama proposed more money for infrastructure projects, tax cuts and credit access for small businesses during a speech on the economy at the Brookings Institution in Washington, D.C.

Speaking at the Brookings Institution in Washington, the president outlined the plan to be paid with $200 billion in unused funds from the Troubled Asset Relief Program, or TARP, financial rescue fund.

He sought to forestall objections from Republicans in Congress who have said the TARP savings should be redirected to reduce the deficit.

"There are those who claim we have to choose between paying down our deficits on the one hand, and investing in job creation and economic growth on the other. But this is a false choice," he said.

Obama described the economic situation he inherited as "entirely dismal" and in danger of "rapidly plummeting toward a second Great Depression."

He said Republicans had stood on the sidelines as the White House and Democrats in Congress moved rapidly to address the problem. As a result, "we are in a very different place today than we were a year ago," the president said.

He said his administration was forced to make unpopular, but necessary decisions "to extend assistance to some of the same banks and financial institutions that had precipitated the crisis in the first place."

The president's latest initiatives would offer a one-year exemption for individuals on the capital-gains tax for new investments in small-business stock. The administration would also extend expensing provisions for small businesses and the acceleration of the rate at which they can deduct the cost of capital expenditures.

It would provide additional funds for a wide range of infrastructure projects on highways, transit, rail, aviation and water.

Finally, the plan would include a so-called Cash for Caulkers incentive program that would provide rebates for consumers who make energy-efficient retrofits on their homes.

"Given the challenge of accelerating the pace of hiring in the private sector, these targeted initiatives are right and they are needed," Obama said. "But with a fiscal crisis to match our economic crisis, we also must be prudent about how we fund it. So to help support these efforts, we’re going to wind down the Troubled Asset Relief Program, or TARP."

Although the president did not characterize his proposals as another stimulus program, GOP critics didn't mince words in saying they believe it will increase a federal deficit that is already at a record level.

House Minority Leader John Boehner (R-OH) issued a statement on Monday ahead of the speech, saying that if the president was going to propose more spending it would be "a giant step backwards."

Speaking on Tuesday, Boehner called Obama's plan "repulsive." He said that when TARP was formed, there was an understanding that all the money authorized probably would not be spent.

"Any money that wasn't spent was supposed to go toward the deficit," he said.

Rep. Jeb Hensarling (R-TX) called the initiative "further proof that TARP has morphed from an emergency injection of liquidity ... into a $700 billion slush fund to promote Democrats' political, social and economic agenda."

The White House has refused to attach a dollar figure to the president's ideas, saying that will be worked out with Congress.

The administration argues that the government can afford to spend more on jobs, because last year's bank bailout was less costly than expected. The administration has cited the $200 billion from unspent TARP authority to pay for the job creation programs while also paying down the nation's debt.