Accessibility links
Scientists Help Ranchers Wrangle Carbon Emissions Researchers in Marin County, Calif., are experimenting with ways to get plants to absorb more carbon emissions. So far, their plan seems to be working — the grass in the experiment plots is capturing 50 percent more carbon from the air than grass in the untouched plots. But, researchers still need to measure what the net carbon uptake is. 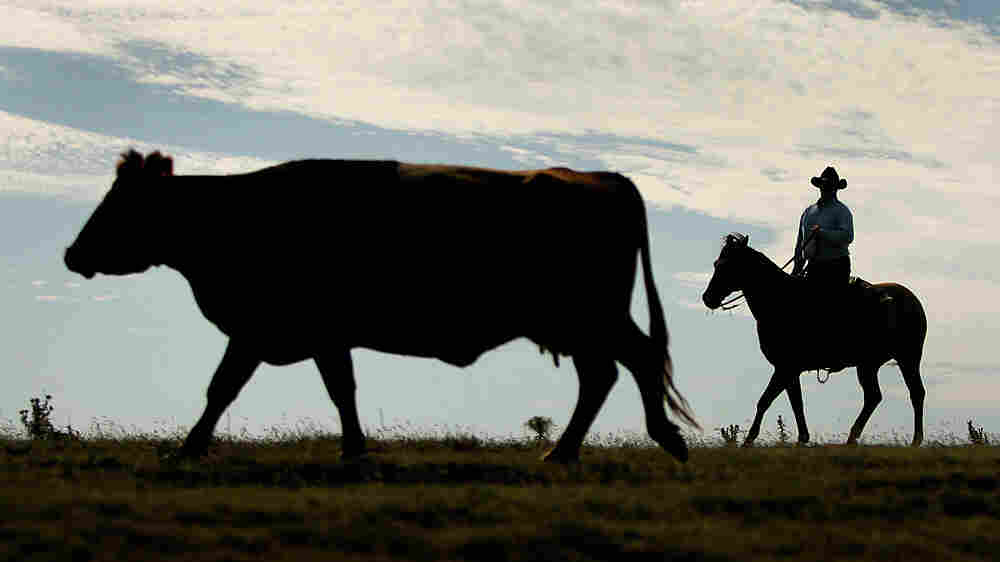 Soon, ranchers like this one might be able to use their land to offset carbon emissions. Some are excited that they could use the land to earn a profit, while others don't want to invest in the idea just yet. Charlie Riedel/AP hide caption 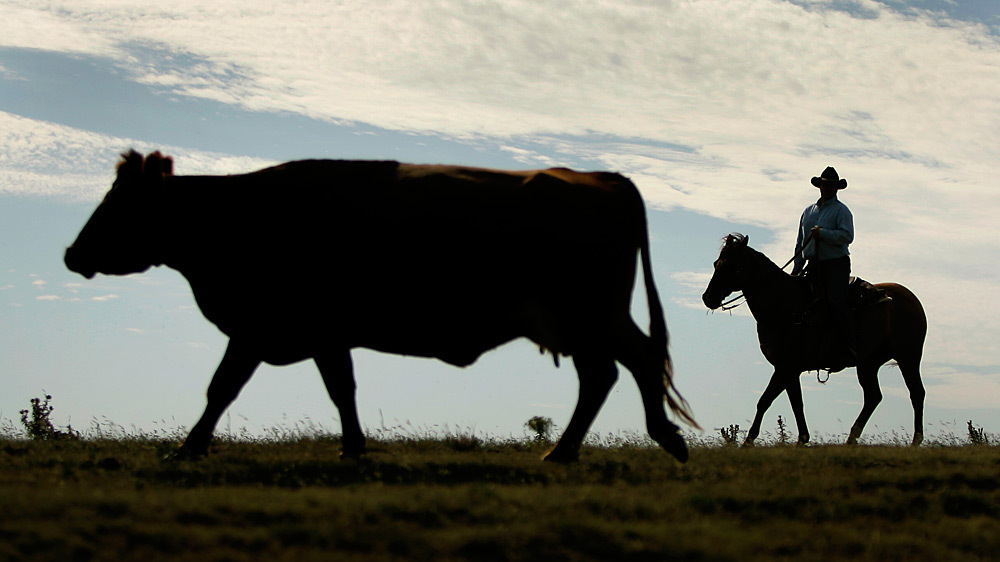 Soon, ranchers like this one might be able to use their land to offset carbon emissions. Some are excited that they could use the land to earn a profit, while others don't want to invest in the idea just yet.

As the world's climate negotiators meet in Copenhagen to discuss how to curb global warming, some people in Marin County, Calif., may already have a partial solution. They call it "carbon ranching."

The idea was hatched by scientists who are trying to coax carbon dioxide out of the air and into cattle pastures. Proponents of the idea say if it proves effective, the practice could be used around the world.

Whendee Silver is a soil scientist at the University of California, Berkeley. If soil is the earth's skin, then Silver might be considered its dermatologist. Silver is steering a jeep up a hill as steep as a ski slope in Marin County to get to plots of pastureland she is experimenting on.

Soil and the plants that grow in it depend on carbon. Essentially, carbon dioxide is plant food and Silver wants them to eat more.

To encourage the uptake of carbon dioxide, Silver has spread compost over these plots of pastureland. The compost is a mix of plant clippings and animal manure, the same kind you might put on your garden at home.

The compost, she says, "increases plant growth, it actually also lowers the temperature a little bit, so the soil doesn't get quite as hot, it doesn't stimulate as much microbial activity."

Her experiment seems to be going well. The grass here is visibly taller, which means there is more carbon in the plant, which also means more food for cows. Ranchers like that part.

But those microbes she mentions complicate the process. Soil is full of them, and when they eat plants, animals and bugs, they emit carbon dioxide into the air. So Silver's composting has to work a balance between supercharging carbon-consuming plants – without beefing up carbon-producing microbes. 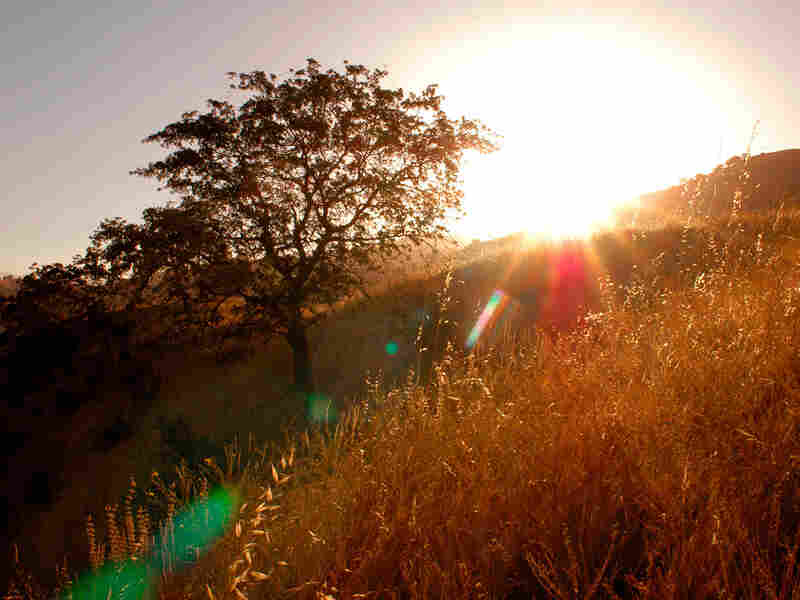 Scientists are experimenting with grassy pastures like this one in California to increase how much carbon dioxide the pastureland captures from the air. iStockphoto.com hide caption 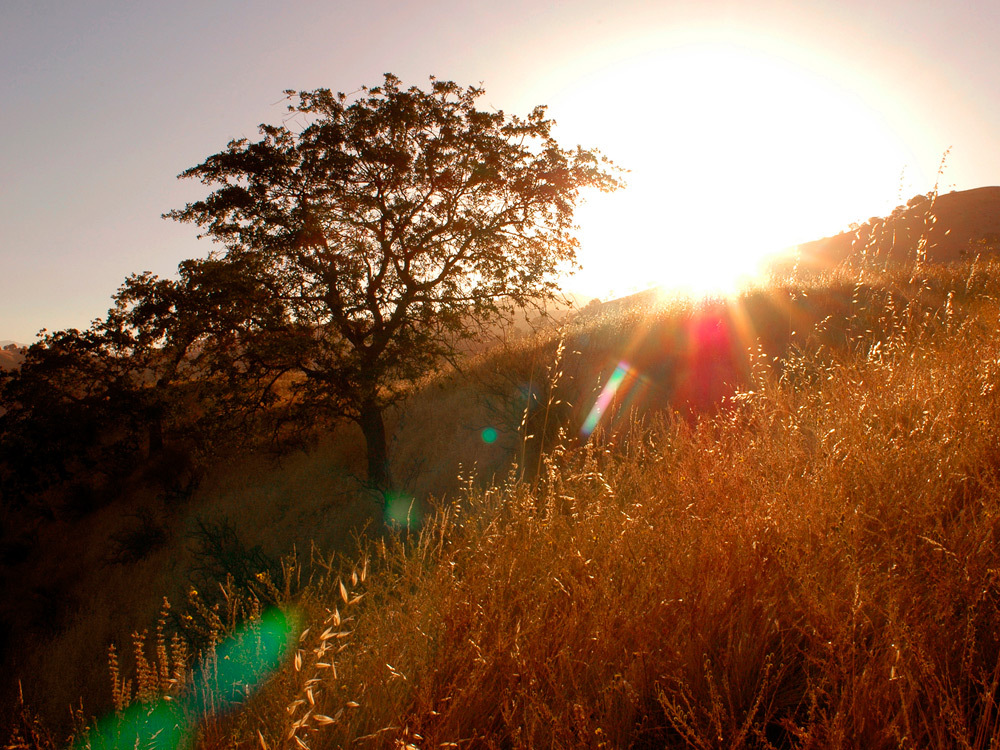 Scientists are experimenting with grassy pastures like this one in California to increase how much carbon dioxide the pastureland captures from the air.

So far, the grass in the composted plots grows so well that it captures 50 percent more carbon from the air than grass in the untouched plots.

And the soil is taking up almost all the carbon in the compost — carbon that likely would have gone up into the atmosphere if it hadn't been added to the pastureland. Silver is now measuring exactly how much that is.

To do that, her team pounds plastic domes into the ground that capture the greenhouse gases seeping up from the soil. But Silver says just the extra grass from composting could make a big dent in greenhouse gas emissions, especially in this part of California.

"Grasslands, because they are in these dry regions, have really, really high root biomass, and it tends to go pretty deep, these plants are looking for water and that's what builds that dark, organic rich soil and that carbon-rich soil," says Silver.

Silver thinks composting could work for thirty years before the soil is saturated with carbon. During that time, Silver says ranchers could see a payoff of sorts for their work. "Hopefully, they'll be able to participate in a carbon market, where we can quantify how much carbon is being stored on the land, and we can sell that as a carbon offset," she says.

That idea intrigues John Wick, a rancher who owns grazing land where Silver is conducting her experiments for the Marin Carbon Project. "Now I think about carbon in everything I'm doing, and it's completely changed my life. This whole ecosystem down there, is alive, I mean up until this point it was just dirt to me, something I pushed around with my bulldozer," says Wick.

Some farmers are a little more skeptical, though. Bob Giacomini owns a dairy farm in Marin County. Silver is trying to persuade him to try composting to see if his pastures will grow better, as well as store more carbon.

But Giacomini is worried about the costs of these experiments. "You know all these things sound good, but you have to look at the cost of them all and see what the payback is."

Giacomini says he's interested in finding out that answer, but not sure how much time and money he has to invest in figuring it out for himself.

That's where a carbon market comes in. If a climate law is passed, industries will be looking for ways to reduce their carbon "footprint." Paying farmers to soak up carbon in their pastures could be one way to do that.

As for the time and know-how, there's a new office in the U.S. Department of Agriculture in Washington designed to create a market for exchanges like that. "The potential for landowners is huge" when it comes to carbon ranching, says Sally Collins, director of the new USDA Office of Ecosystem Services and Markets.

Land that stores carbon would generate extra income. Actually measuring carbon in soil and plants isn't easy, though. Collins acknowledges that a market won't work unless the buyers and sellers know exactly what they're getting.

"We have got to figure out how to have one set of scientifically based, credible standards," says Collins.

These standards would measure exactly how much carbon stays in the soil and the grass. And even what happens to it after microbes and cows eat it. This all sounds complicated, and it is. But as negotiators at the Copenhagen climate meeting struggle with ways to reduce carbon dioxide in the atmosphere, storing carbon in soil and plants may start to look like an attractive option.