Accessibility links
Iraq's Shaky Economy Poses Threat To Future The Iraqi economy is mired in old patterns: Most paying jobs are with the government, which is dependent on oil for revenue. Iraqi entrepreneurs say red tape and corruption make it difficult to start a private business; one economist argues the economy is on the brink of collapse. 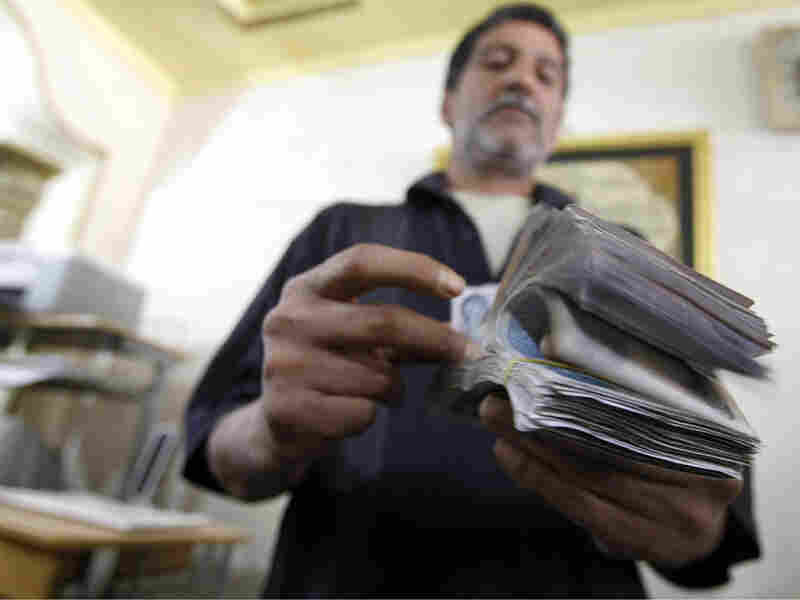 An Iraqi man counts out Iraqi dinars at a money changer in central Baghdad in May. The Iraqi economy is hampered by red tape and corruption. Sabah Arar/AFP/Getty Images hide caption 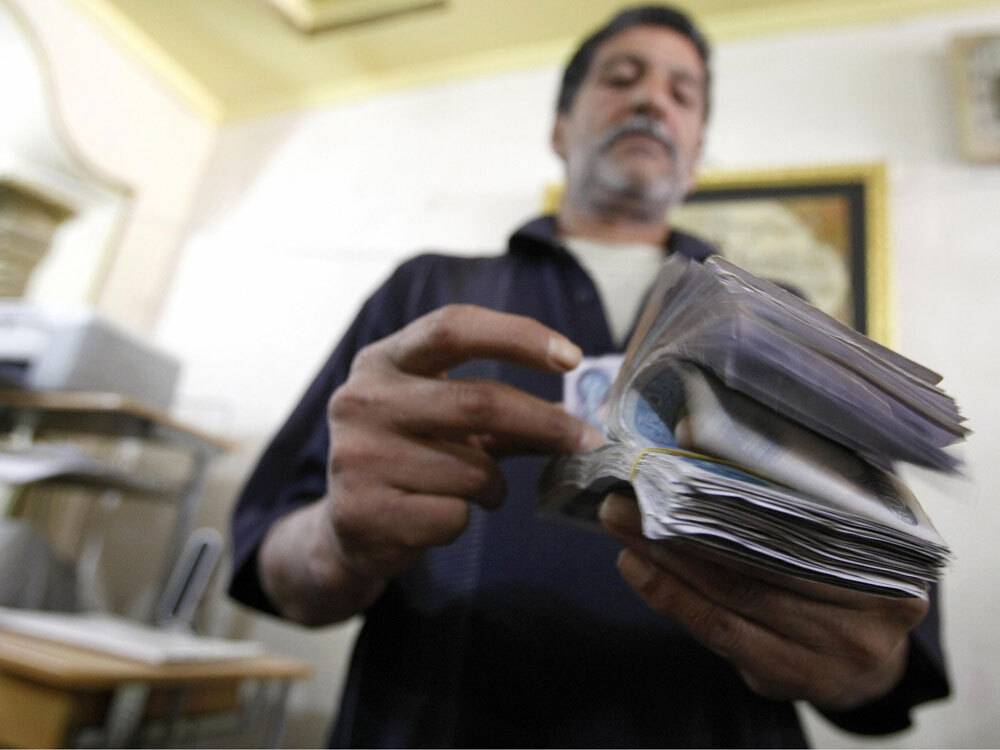 An Iraqi man counts out Iraqi dinars at a money changer in central Baghdad in May. The Iraqi economy is hampered by red tape and corruption.

The United States has often proclaimed that a major goal of its efforts in Iraq is to bring about a "free and prosperous" country. But Iraq's economy remains mired in a pattern that is not much different from that of the Saddam Hussein regime.

Most salary-paying jobs in Iraq come from the government, rather than the private sector, and government revenues are overwhelmingly dependent on oil. Iraqi entrepreneurs say red tape and corruption make it difficult to start a private business.

An American economist says that is an unsustainable situation that is driving Iraq's economy to the brink of collapse.

On a recent Monday morning, the trading floor of the Iraqi stock exchange is packed with men watching the progress of their shares on widescreen TVs.

The director of the exchange, Taha Abdul-Salam, is proud of his operation. It remains small, with slightly more than 70 companies traded on volume worth about $2 million a day.

But that is a big leap from the first session in 2004, when about $150,000 changed hands and prices were scrawled on the board by hand.

Abdul-Salam wants to keep up that growth, but he has a problem: It is difficult to bring new businesses onto the exchange because very few are being formed. He says one major problem is unclear and unnecessarily complex regulation.

"How can you invite people to invest in your country? By preparing them very clear regulation," he says.

Because the regulatory environment is so hostile, it forces businesses to be corrupt to survive.

The process of setting up a business in Iraq requires 11 procedures, at 11 different ministries, says Frank Gunter, a professor of economics at Lehigh University. On average, Gunter says, it takes 77 days and costs about $2,800 in fees alone — and that assumes you have good legal advice.

Gunter studied Iraq's business climate as the senior civilian economic adviser to the U.S. military in Iraq from 2008 to 2009. He cites a recent study by the World Bank that measures the cost and ease of starting a business in 183 countries. Iraq scored close to the bottom, at 153.

Gunter argues that support for private business is a national security issue for Iraq. The Iraqi government now provides jobs, either directly or indirectly, for about 50 percent of the workforce. That was at least temporarily affordable when high oil prices fattened Iraq's revenues.

Now, with prices down, Gunter says the situation will get worse because each year, about 250,000 young Iraqis enter the job market.

"If they don't find jobs, then these young Iraqis, mostly men, mostly young, mostly uneducated, become a recruiting pool for the criminal gangs, for the insurgency, the militias that work for the religious and political groups," he says.

In a recent survey by Transparency International, Iraq ranked fifth from the bottom, making it one of the most corrupt countries in the world.

"Because the regulatory environment is so hostile, it forces businesses to be corrupt to survive. Some of the survey data we did in Iraq shows that many small businesses pay 20 or 40 percent of all their costs in bribes," he says.

Gunter says a step in the right direction would be for Iraq to adopt a commercial code more like those of Saudi Arabia or Kuwait, which rank in the top one-third of business-friendly countries.

Iraq's planning minister, Ali Baban, says he is not ready to accept Gunter's diagnosis that Iraq's economy is on the brink of collapse, but he admits the situation is dire.

Baban says unless the government hurries to support the productive sectors — industry and agriculture — it will be in a situation that "no one will envy."

Gunter says he is not without hope. His time in Iraq has taught him respect for the country's entrepreneurial tradition.

"I argue that anybody who can survive as a small businessman in the underground economy in Baghdad is the ultimate entrepreneur," he says.