Accessibility links
Series Overview: Meet the New Clergy Americans remain largely religious, but their beliefs have grown more diverse. As we follow a new generation of spiritual leaders, we'll explore what draws them to the calling — and what drives the faithful in a world where religion remains a potent force. 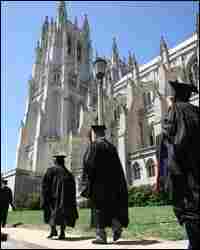 Students from the Wesley Theological Seminary line up for graduation day ceremonies at the National Cathedral in Washington, D.C., May 2007. David Kidd for NPR hide caption

In most affluent countries, it's become a truism that wealth and education sap a population of faith. Many Europeans have essentially shelved their belief in God and ceased going to church. And in Asia's economic powerhouses, Japan and South Korea, the traditional religions of Shintoism and Buddhism have become more cultural practice than spiritual belief.

But the United States appears to buck that trend. It remains a largely religious country. Nine out of 10 Americans profess belief in God or a supreme being, and 43 percent attend religious services on a regular basis.

At the same time, Americans' religious beliefs have grown more diverse. While more than three-quarters identify themselves as Catholic or Protestant Christians, the numbers of Muslims, Buddhists and Hindus have more than doubled over the past decade.

At the center of all this religious vitality are the men and women who guide their congregations on their journeys of faith.

Over the next year, NPR will follow the new generation of spiritual leaders. In our series "The Young and the Godly," we will profile new clergy as they assume the mantle of pastor and priest, imam, rabbi and monk. We will explore why they chose this often low-paying work. And we'll ask, "What does the call of God sound like?" What do they dread the most — the first sermon, the first funeral, the unanswerable question? And how does the political and social climate affect their flock in an age of terrorism and government scrutiny?

Our series begins with Chris and Katie Bishop, ages 25 and 23, as they begin to pastor three United Methodist churches in rural Maryland. He works with youth. She works with parishioners her grandparents' age. Both say they heard the call to ministry at an early age. And while beginning that ministry is a big step in their spiritual journeys, they are both confident and apprehensive about their new roles.

As NPR charts the course of these new leaders, we also hope to shed some light on the spiritual impulses that drive a majority of Americans, as they face a world where religion, for better or worse, is a potent force.