Accessibility links
Matt Damon Shapes Up To Play A South African Hero The all-American actor takes on the part of rugby captain Francois Pienaar in the inspiring drama Invictus. The accent was tough to master, and the history involved was complicated. But, as Damon tells Michele Norris, there was a much taller hurdle that he never even tried to get over. 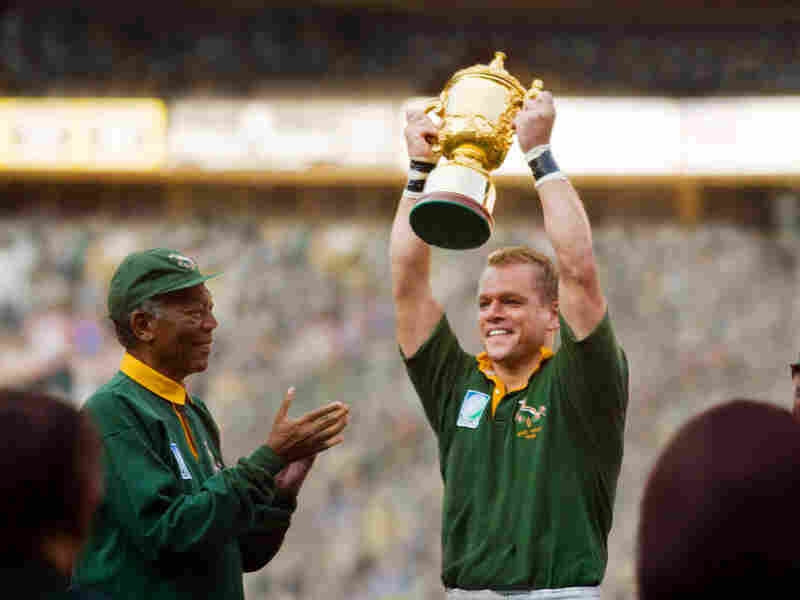 A Win For The Country: Morgan Freeman and Matt Damon play Nelson Mandela and Francois Pienaar in Invictus, the tale of unlikely allies in a game-changing gesture that helped bridge differences in a bitterly divided South Africa in 1995. Keith Bernstein/Warner Bros. hide caption 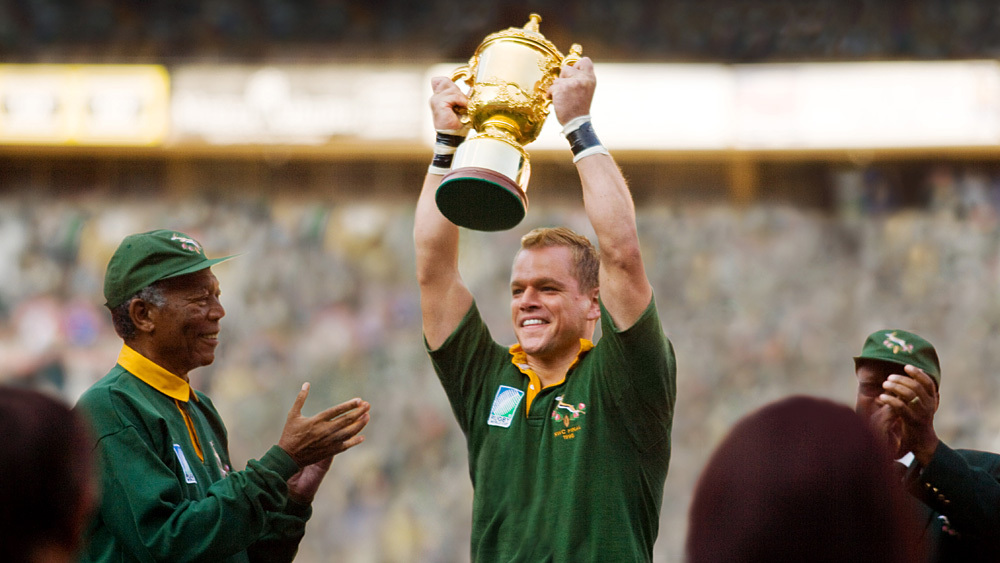 A Win For The Country: Morgan Freeman and Matt Damon play Nelson Mandela and Francois Pienaar in Invictus, the tale of unlikely allies in a game-changing gesture that helped bridge differences in a bitterly divided South Africa in 1995.

Matt Damon says his first worry about playing a South African rugby hero in the new film Invictus wasn't about the story's complicated racial politics, or whether he could nail an Afrikaner accent. It was what he learned from Google about the real Francois Pienaar's height.

"I looked him up online and just saw the size of him," the actor tells NPR's Michele Norris, "and I said, 'Listen, I'm 5 [feet] 10 [inches], and I don't think I'm gonna grow six inches before we start shooting."

Director Clint Eastwood didn't stretch him, but Damon did bulk up for the role, spending time in the gym before traveling to Cape Town for the shoot. And he worked hard to get inside the head of a man who wasn't just a member of South Africa's privileged class, but a sports star, too.

"As an American going there, to grasp the nuance of that culture is probably impossible," Damon admits. "The fear and the guilt and the shame and all of those things probably could only truly be expressed by somebody who's from there."

'Let Me Lead You'

'This Is Our Destiny'

The actor did have two books to work with, though: John Carlin's Playing the Enemy, which provided the source material for Invictus, and Pienaar's own autobiography. Damon says the latter helped simplify things a bit.

"He was an athlete — he was really focused on rugby, and winning the World Cup was his lifelong dream," Damon says. That single-mindedness helped shape the character Damon would build.

Shaping A Complicated Story For Two Hours On Screen

Invictus is a dramatization of a famous story: As the newly elected leader of a nation deeply divided by its history of racial strife, Nelson Mandela decided to use the country's national rugby team, called the Springboks, as a symbol to rally his people around. He reached out to Pienaar, and the two men formed an alliance to turn the struggling team into a winning squad.

It was a bold play, and far from a certain win. Black South Africans hated the team and the sport, seeing both as symbols of the white racist regime they'd only just overturned. And plenty of Afrikaners were deeply suspicious of Mandela. Some of Pienaar's teammates were among them — at least the way the film tells the tale. 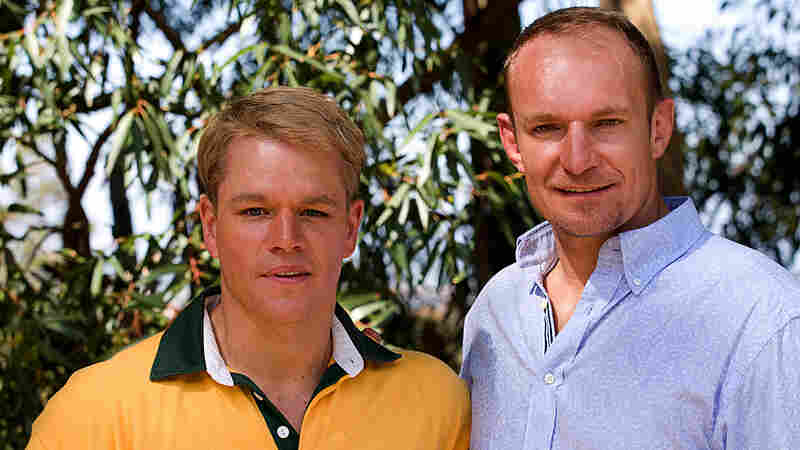 Measuring Up: The real Pienaar (right) has six inches of height on the 5-foot-10-inch actor — so Damon focused on bulking up at the gym and mastering the Afrikaner accent. Keith Bernstein/Warner Bros hide caption 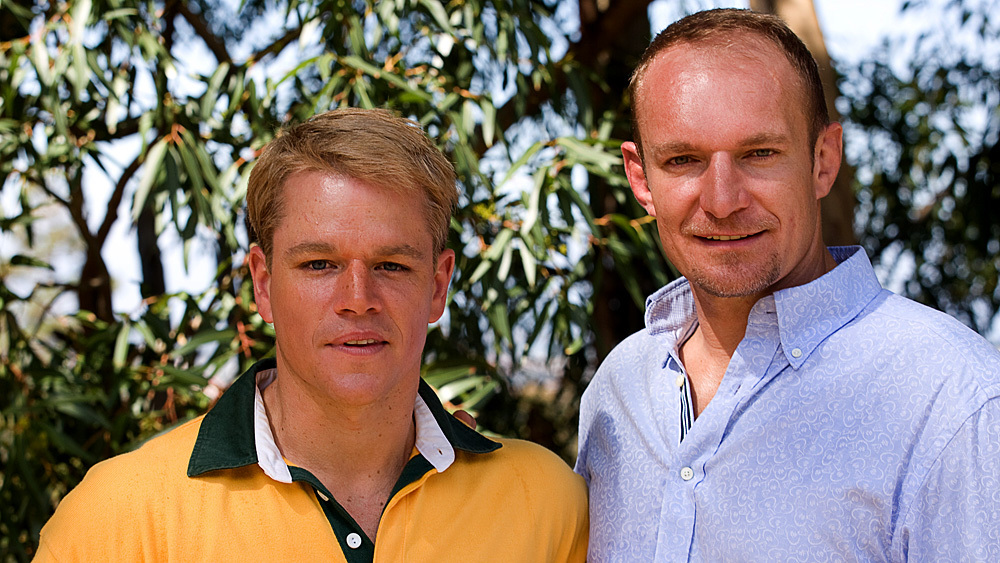 Measuring Up: The real Pienaar (right) has six inches of height on the 5-foot-10-inch actor — so Damon focused on bulking up at the gym and mastering the Afrikaner accent.

"This is a really complicated story," Damon says, "and any movie that's gonna be two hours long, you're going to have some simplification. Each character is going to stand in for a different perspective."

So Invictus measures its progressive-minded Pienaar against less enthusiastic teammates who grumble in the locker room about singing the new South African anthem, "Nkosi Sikelel' iAfrika" — when in reality, Damon reports, "Francois said they were in the shower singing 'Nkosi Sikelel'; they were proud, and they wanted everybody to hear these white guys get the Xhosa pronunciations correct."

The choice, Damon says, was about how to "artfully represent these different perspectives that were very real," and that ranged from liberal acceptance to insecurity and resentment to outright, hard-core extremist opposition to Mandela's new black majority government.

Damon's co-star, Morgan Freeman, told NPR last year that working with Clint Eastwood is gratifying not least because the director works fast, doesn't shoot too many retakes and keeps his operation streamlined.

"It was exactly as it had been advertised," Damon says. And the pace didn't trouble him. "We all came out of theater, so we're used to doing one take. It's just in movies, people tend to not work that efficiently. But if you know you're with a group that works that way, you come really prepared."

Damon remembers a story Eastwood told him about working with Freeman and Gene Hackman on Unforgiven. The director rehearsed them — once, on the first day.

"And he said, 'They each got one or two lines out, and I said 'Stop, just get the cameras in here right now.' He said, 'I never rehearsed again with either of them. ... They're ready to go. They're like thoroughbreds, and when they show up at work you have to be ready to go.' "

Playing It By Ear, And Remembering To Listen

If an actor's role choices are like an artist's portfolio — a series of images that add up over time to make a picture of the performer — does Damon have a sense of what he wants his catalog to say about him?

"I don't do a lot of long-term strategizing," he confesses. "I just do a movie if it feels right, and generally that means that it's a director I want to work with. Obviously you want the role to be good, but that's actually the least important component for me — just because I want to direct someday, so I'm really enjoying working with these different directors."

But he's in no particular hurry, he says, to get started on that new direction.

"I don't feel like I'm doing any damage to my directing career," Damon says wryly, "by waiting to start and continuing to work with people like Clint, or Soderbergh, or the Coen brothers. I learn so much every day that I go to work, just being around these guys and watching them solve problems. It's really a great way to learn how to do something.