Accessibility links
Why It's Hard to Admit to Being Wrong We all have a hard time admitting that we're wrong, but according to a new book about human psychology, it's not entirely our fault. Social psychologist Elliot Aronson says our brains work hard to make us think we are doing the right thing, even in the face of sometimes overwhelming evidence to the contrary.

Listen
Why It's Hard to Admit to Being Wrong

We all have a hard time admitting that we're wrong, but according to a new book about human psychology, it's not entirely our fault. Social psychologist Elliot Aronson says our brains work hard to make us think we are doing the right thing, even in the face of sometimes overwhelming evidence to the contrary.

Elliot Aronson, co-author, Mistakes Were Made (But Not by Me); social psychologist; professor emeritus, psychology, University of California Santa Cruz

Excerpt: Mistakes Were Made (But Not by Me) 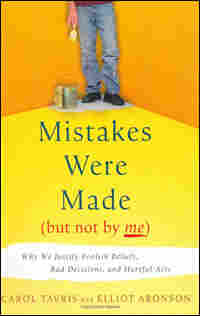 Cognitive Dissonance: The Engine of Self-justification

It's fascinating, and sometimes funny, to read doomsday predictions, but it's even more fascinating to watch what happens to the reasoning of true believers when the prediction flops and the world keeps muddling along. Notice that hardly anyone ever says, "I blew it! I can't believe how stupid I was to believe that nonsense"? On the contrary, most of the time they become even more deeply convinced of their powers of prediction. The people who believe that the Bible's book of Revelation or the writings of the sixteenth-century self-proclaimed prophet Nostradamus have predicted every disaster from the bubonic plague to 9/11 cling to their convictions, unfazed by the small problem that their vague and murky predictions were intelligible only after the event occurred.

Half a century ago, a young social psychologist named Leon Festinger and two associates infiltrated a group of people who believed the world would end on December 21. They wanted to know what would happen to the group when (they hoped!) the prophecy failed. The group's leader, whom the researchers called Marian Keech, promised that the faithful would be picked up by a flying saucer and elevated to safety at midnight on December 20. Many of her followers quit their jobs, gave away their homes, and dispersed their savings, waiting for the end. Who needs money in outer space? Others waited in fear or resignation in their homes. (Mrs. Keech's own husband, a nonbeliever, went to bed early and slept soundly through the night as his wife and her followers prayed in the living room.) Festinger made his own prediction: The believers who had not made a strong commitment to the prophecy—who awaited the end of the world by themselves at home, hoping they weren't going to die at midnight—would quietly lose their faith in Mrs. Keech. But those who had given away their possessions and were waiting with the others for the spaceship would increase their belief in her mystical abilities. In fact, they would now do everything they could to get others to join them.

At midnight, with no sign of a spaceship in the yard, the group felt a little nervous. By 2 a.m., they were getting seriously worried. At 4:45 a.m., Mrs. Keech had a new vision: The world had been spared, she said, because of the impressive faith of her little band. "And mighty is the word of God," she told her followers, "and by his word have ye been saved—for from the mouth of death have ye been delivered and at no time has there been such a force loosed upon the Earth. Not since the beginning of time upon this Earth has there been such a force of Good and light as now floods this room."

The group's mood shifted from despair to exhilaration. Many of the group's members, who had not felt the need to proselytize before December 21, began calling the press to report the miracle, and soon they were out on the streets, buttonholing passersby, trying to convert them. Mrs. Keech's prediction had failed, but not Leon Festinger's.

The engine that drives self-justification, the energy that produces the need to justify our actions and decisions — especially the wrong ones — is an unpleasant feeling that Festinger called "cognitive dissonance." Cognitive dissonance is a state of tension that occurs whenever a person holds two cognitions (ideas, attitudes, beliefs, opinions) that are psychologically inconsistent, such as "Smoking is a dumb thing to do because it could kill me" and "I smoke two packs a day." Dissonance produces mental discomfort, ranging from minor pangs to deep anguish; people don't rest easy until they find a way to reduce it. In this example, the most direct way for a smoker to reduce dissonance is by quitting. But if she has tried to quit and failed, now she must reduce dissonance by convincing herself that smoking isn't really so harmful, or that smoking is worth the risk because it helps her relax or prevents her from gaining weight (and after all, obesity is a health risk, too), and so on. Most smokers manage to reduce dissonance in many such ingenious, if self-deluding, ways.

Dissonance is disquieting because to hold two ideas that contradict each other is to flirt with absurdity and, as Albert Camus observed, we humans are creatures who spend our lives trying to convince ourselves that our existence is not absurd. At the heart of it, Festinger's theory is about how people strive to make sense out of contradictory ideas and lead lives that are, at least in their own minds, consistent and meaningful. The theory inspired more than 3,000 experiments that, taken together, have transformed psychologists' understanding of how the human mind works. Cognitive dissonance has even escaped academia and entered popular culture. The term is everywhere. The two of us have heard it in TV newscasts, political columns, magazine articles, bumper stickers, even on a soap opera. Alex Trebek used it on Jeopardy, Jon Stewart on The Daily Show, and President Bartlet on The West Wing. Although the expression has been thrown around a lot, few people fully understand its meaning or appreciate its enormous motivational power.

In 1956, one of us (Elliot) arrived at Stanford University as a graduate student in psychology. Festinger had arrived that same year as a young professor, and they immediately began working together, designing experiments to test and expand dissonance theory. Their thinking challenged many notions that were gospel in psychology and among the general public, such as the behaviorist's view that people do things primarily for the rewards they bring, the economist's view that human beings generally make rational decisions, and the psychoanalyst's view that acting aggressively gets rid of aggressive impulses.

Consider how dissonance theory challenged behaviorism. At the time, most scientific psychologists were convinced that people's actions are governed by reward and punishment. It is certainly true that if you feed a rat at the end of a maze, he will learn the maze faster than if you don't feed him; if you give your dog a biscuit when she gives you her paw, she will learn that trick faster than if you sit around hoping she will do it on her own. Conversely, if you punish your pup when you catch her peeing on the carpet, she will soon stop doing it. Behaviorists further argued that anything that was merely associated with reward would become more attractive — your puppy will like you because you give her biscuits — and anything associated with pain would become noxious and undesirable.

Behavioral laws do apply to human beings, too, of course; no one would stay in a boring job without pay, and if you give your toddler a cookie to stop him from having a tantrum, you have taught him to have another tantrum when he wants a cookie. But, for better or worse, the human mind is more complex than the brain of a rat or a puppy. A dog may appear contrite for having been caught peeing on the carpet, but she will not try to think up justifications for her misbehavior. Humans think; and because we think, dissonance theory demonstrated that our behavior transcends the effects of rewards and punishments and often contradicts them.

For example, Elliot predicted that if people go through a great deal of pain, discomfort, effort, or embarrassment to get something, they will be happier with that "something" than if it came to them easily. For behaviorists, this was a preposterous prediction. Why would people like anything associated with pain? But for Elliot, the answer was obvious: self-justification. The cognition that I am a sensible, competent person is dissonant with the cognition that I went through a painful procedure to achieve something — say, joining a group that turned out to be boring and worthless. Therefore, I would distort my perceptions of the group in a positive direction, trying to find good things about them and ignoring the downside.

Excerpt from MISTAKES WERE MADE (BUT NOT BY ME), copyright © 2007 by Carol Tavris and Elliot Aronson, reprinted by permission of Harcourt, Inc. 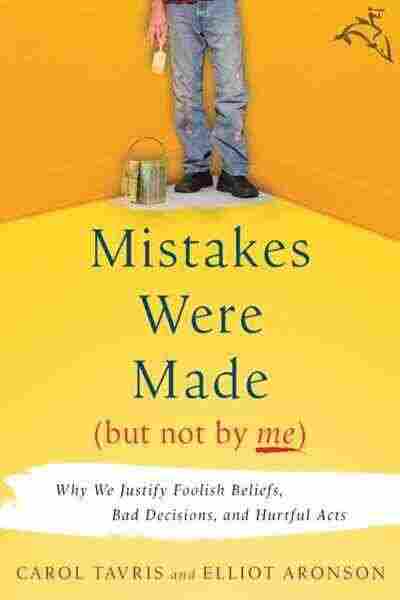 Why We Justify Foolish Beliefs, Bad Decisions, and Hurtful Acts

by Carol Tavris and Elliot Aronson

Title
Mistakes Were Made, but Not by Me
Subtitle
Why We Justify Foolish Beliefs, Bad Decisions, and Hurtful Acts
Author
Carol Tavris and Elliot Aronson