Accessibility links
Obama Defends U.S. Wars As He Accepts Nobel Prize In Oslo, the president says the U.S. must remain a standard-bearer in the conduct of war. 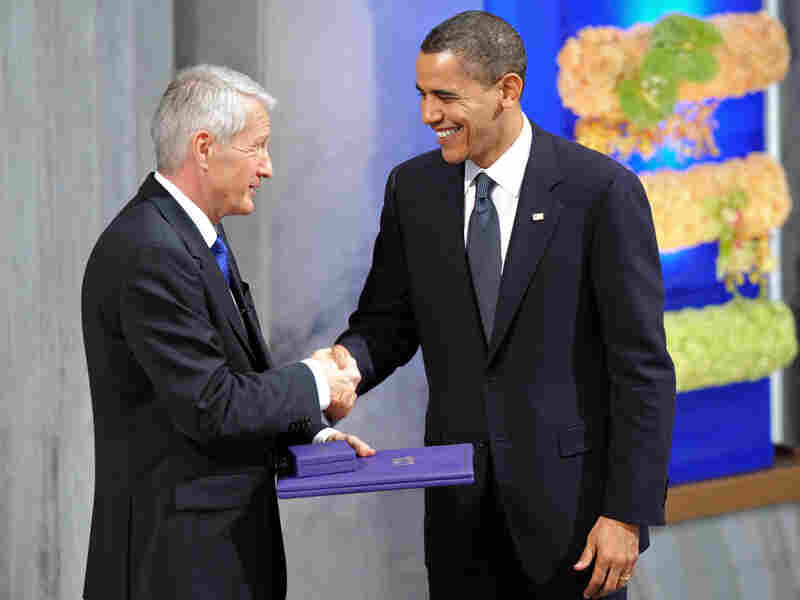 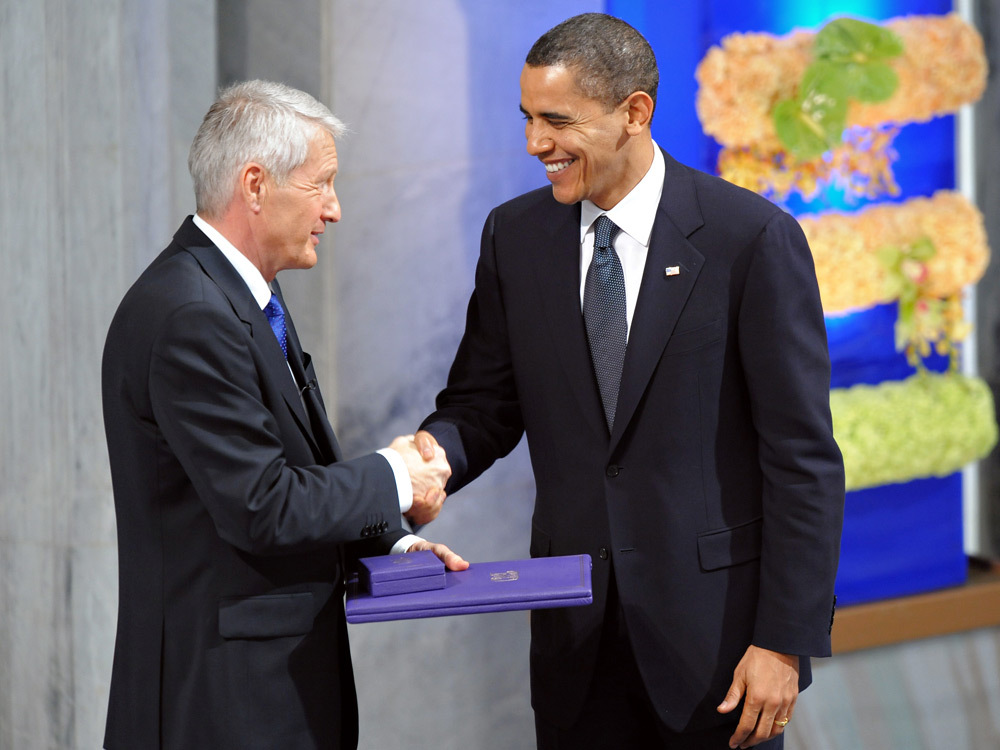 President Obama accepted the Nobel Peace Prize during a ceremony Thursday in Norway, acknowledging the paradox of receiving the award as the U.S. is embroiled in two wars, while maintaining that instruments of war have a role in preserving peace.

In his acceptance speech, Obama told Nobel Committee members and guests in Oslo that achieving peace must begin with the recognition that the use of force is sometimes morally justified.

"Make no mistake: Evil does exist in the world. A nonviolent movement could not have halted Hitler's armies. Negotiations cannot convince al-Qaida's leaders to lay down their arms," he told the crowd.

It was just nine days ago that Obama announced he is sending an additional 30,000 U.S. troops to Afghanistan in an effort to step up training of Afghan security forces and root out insurgents operating on the border with Pakistan.

"I understand why war is not popular, but I also know this: The belief that peace is desirable is rarely enough to achieve it," he said, urging support for NATO and saying peacekeeping responsibilities shouldn't be left to a few countries.

The president said war is justified in cases of self-defense, when civilians are being slaughtered by their own government, or a civil war threatens to engulf an entire region.

Accompanied by first lady Michelle Obama, the president struck a humble tone upon arriving in the Norwegian capital after a seven-hour flight from Washington, D.C. He acknowledged the controversy surrounding the Nobel Committee's decision to honor him less than a year into his presidency, saying he knew there were others more deserving of the honor.

During his speech, Obama took note of the "giants of history" who have been honored with the Peace Prize, including humanitarian Albert Schweitzer, civil rights leader Martin Luther King Jr. and Red Cross founder Henry Dunant.

"My accomplishments are slight" by comparison, he said.

At a news conference with Norwegian Prime Minister Jens Stoltenberg earlier in the day, Obama vowed to use the award to advance his goals for peace.

"My task here is to continue on the path that I believe is not only important for America, but important for lasting peace in the world," Obama said. His goals include stabilizing Afghanistan, mobilizing an international effort to deal with terrorism and combating climate change.

The acceptance ceremony at Oslo City Hall set off a whirlwind trip for the Obamas, who were expected to be in the capital city for little more than 24 hours — to the dismay of some Norwegians. The president was later expected to view a torchlight precession from the balcony of his hotel before meeting with Norwegian royalty. The Obamas were scheduled to end the day with at a banquet and then head back to Washington.

As Obama walked onto the stage, trumpets sounded and he was greeted with polite applause.

During the 36-minute speech, the president said nations of the world must adhere to standards that govern the use of force, but he acknowledged that Americans can't expect other nations to follow rules that the U.S. ignores.

"Even as we confront a vicious adversary that abides by no rules, I believe that the United States of America must remain a standard bearer in the conduct of war," Obama said, adding that this belief led him to ban torture and close the U.S. military prison at Guantanamo Bay, Cuba.

"We lose ourselves when we compromise the very ideals that we fight to defend," he said.

After spending much of the speech talking about the use of force, Obama told the crowd that the recipe for lasting peace should include the development of alternatives to conflict that are strong enough to force intransigent regimes to adhere to international law.

"Those who care for their own security cannot ignore the danger of an arms race in the Middle East or East Asia," he said. "Those who seek peace cannot stand idly by as nations arm themselves for nuclear war."

Obama is the third sitting U.S. president to be awarded the peace prize. Theodore Roosevelt claimed the award in 1906 for his role in ending the Russo-Japanese war. Woodrow Wilson won in 1919 for his work as chief architect of the League of Nations.

Former President Jimmy Carter received the prize more than two decades after leaving office in recognition of his continued work for international peace and human rights.

The Nobel committee announced in October that it would bestow the honor on Obama "for his extraordinary efforts to strengthen international diplomacy and cooperation between peoples" — giving an extra nod to Obama's goal of a world free of nuclear weapons.

"Thanks to Obama's initiative, the USA is now playing a more constructive role in meeting the great climatic challenges the world is confronting. Democracy and human rights are to be strengthened," the committee said.

The Nobel Peace Prize has been awarded to 97 individuals and 20 organizations. The first peace prize was awarded in 1901 to Dunant and Frederic Passy, an internationally known pacifist.

The prize includes a check for $1.4 million, which Obama has said he will donate to charity.

The other Nobel prizes were awarded later Thursday during a ceremony in Stockholm, Sweden. King Carl XVI Gustaf honored 13 people for outstanding work in chemistry, physics, medicine, literature and economics.