Accessibility links
Saudi Arabia Tries To Stall Global Emissions Limits Saudi Arabia's strategy on climate change has long been to deny the science, a tactic it is using at the U.N. summit in Copenhagen. Saudis fear that reducing emissions will reduce oil exports and be catastrophic for their economy. 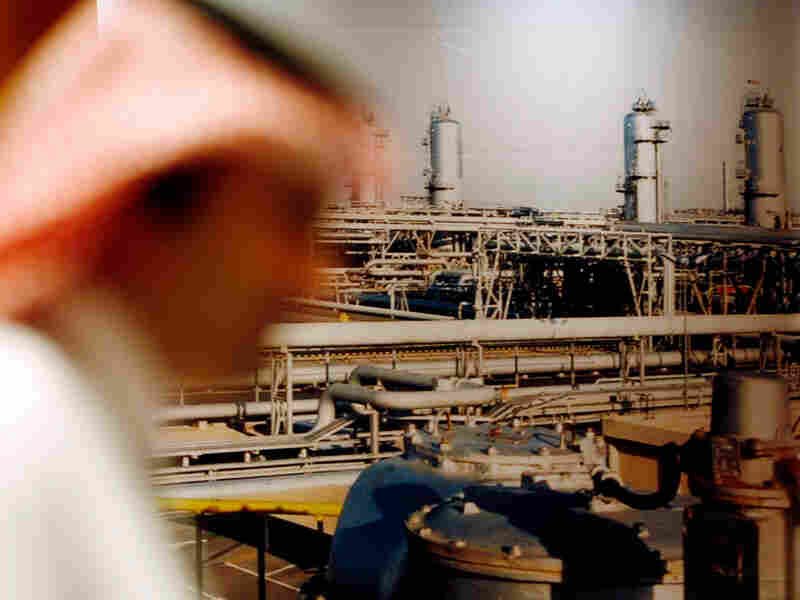 A Saudi official stands in front of a giant Saudi oil industry picture at a hotel in the Red Sea port city of Jiddah, Saudi Arabia, ahead of a major oil summit in June 2008. Hasan Jamali/AP hide caption 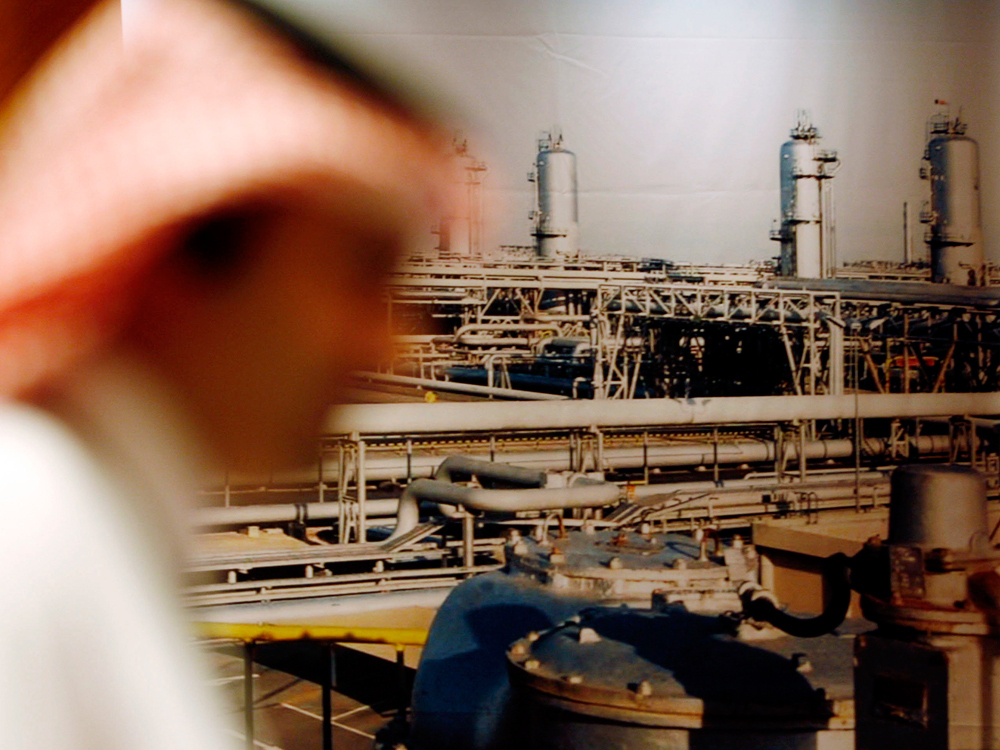 A Saudi official stands in front of a giant Saudi oil industry picture at a hotel in the Red Sea port city of Jiddah, Saudi Arabia, ahead of a major oil summit in June 2008.

Saudi Arabia is a major dissident at the global climate conference in Copenhagen, where representatives of more than 190 countries are trying to agree on a new international initiative to combat climate change.

Many environmental groups say the oil-producing giant has long played an obstructionist role in climate change negotiations. Saudi officials fear that reducing emissions will reduce oil exports and be catastrophic for their economy.

For years, Saudi Arabia and other oil-producing countries claimed that scientific evidence that people cause climate change was inconclusive. Then, a few years ago, the Saudis shifted their focus to stall tactics and demanding payments of $100 billion to $200 billion to offset future losses in oil revenue.

After a file of e-mail messages by environmental researchers emerged in late November that appeared to question whether humans influence climate change, Saudi negotiators are back to their original tactic: Deny the science.

Speaking through an interpreter during Monday's opening ceremonies in Copenhagen, Saudi Arabia's longtime climate negotiator Mohammad Al-Sabban said his country would have to make great sacrifices to reduce carbon emissions.

"The volume and the size of those sacrifices must be predicated on a sound scientific basis and must be built on a secure foundation of information, which is what we found now is not true and that our high level of trust had suffered," Sabban said.

Sabban says before negotiations can continue, an independent body should investigate the so-called Climategate scandal — leaked e-mails from leading climate researchers at Britain's University of East Anglia suggesting that some scientists have suppressed research that shows people don't cause climate change.

As the 12-day Copenhagen summit continues — it ends Dec. 18 — the leak has been seized upon by critics who say the e-mail messages prove there is a scientific conspiracy to manipulate the data on climate change.

Malini Mehra, who heads the Center for Social Markets, a nonprofit social justice and environmental group with offices in Great Britain and India, says studies show Saudi Arabia is in the top 20 carbon polluters in the world.

"Saying now that they are skeptical about the climate science shows just how transparent the agenda is," Mehra says of the Saudi government. "And that is one to try and deflect and subvert the attention away from the need for climate action right now." 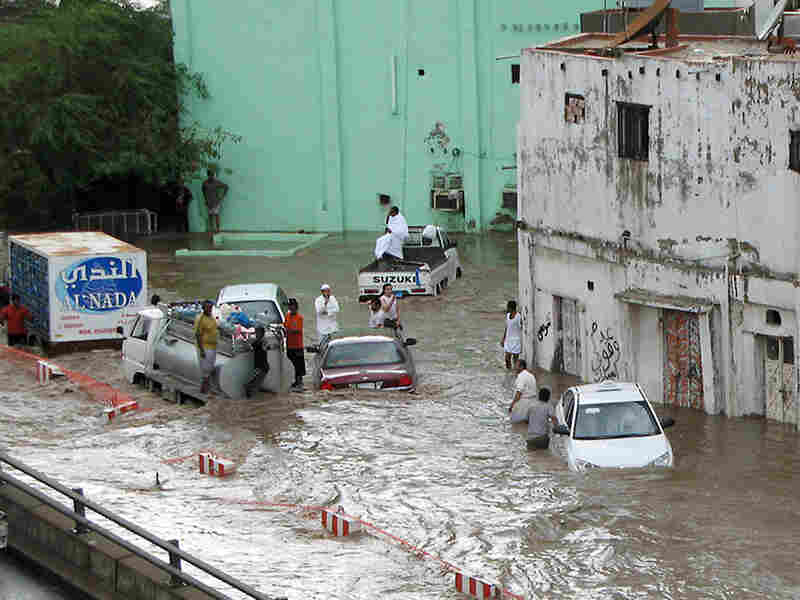 People are stranded in a flooded area in the Saudi Red Sea city of Jeddah on Nov. 25. Flooding killed more than 100 people on Saudi Arabia's west coast in November. Some scientists say the number of weather-related disasters in the country is on the rise. AFP/Getty Images hide caption 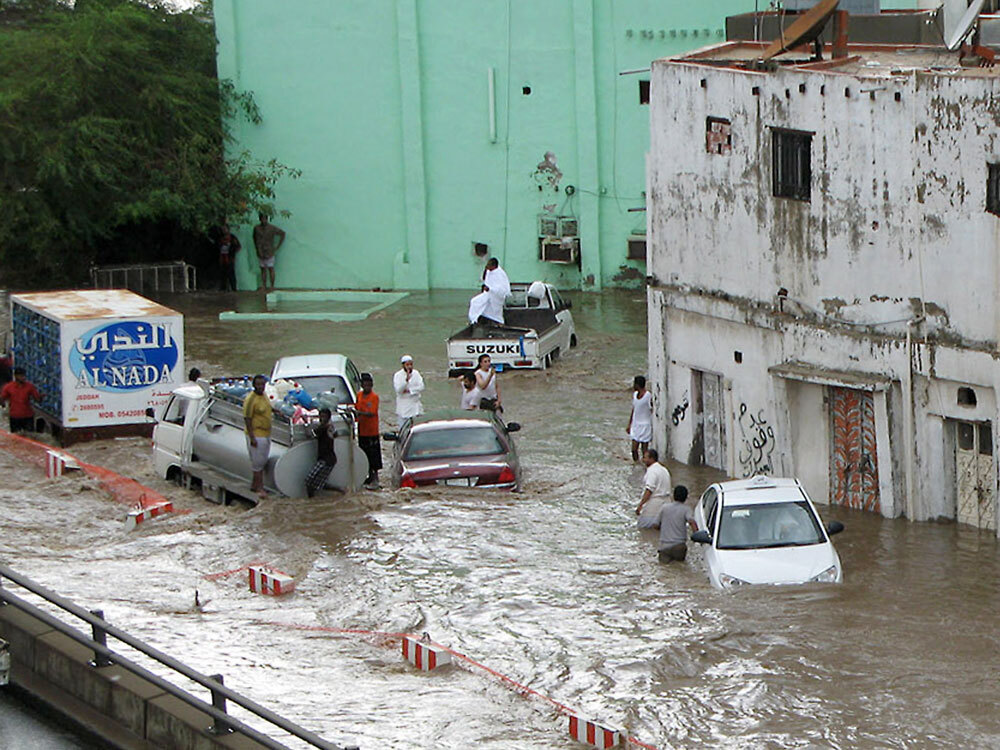 People are stranded in a flooded area in the Saudi Red Sea city of Jeddah on Nov. 25. Flooding killed more than 100 people on Saudi Arabia's west coast in November. Some scientists say the number of weather-related disasters in the country is on the rise.

Most Saudis say climate change isn't such a big concern. It's already hot, the thinking goes, so what if it gets a few degrees hotter?

Mansour Almazroui, who heads a new center for climate change at King Abdulaziz University in Jeddah, Saudi Arabia, is trying to counter that thinking. He says the number of weather-related disasters in the country — such as sandstorms and long-term droughts followed by heavy rains — is on the rise. Last month, flooding killed more than 100 people on the country's west coast.

"I think the link is not clear. But if this is going to be frequent, then this is an indication of climate change," Almazroui says.

But Saudi Arabia also has an exploding population — 29 million people and growing by 2 percent a year — that won't be able to maintain its current standard of living on dwindling oil revenues. Western diplomats and watchdog groups say the Saudis know that an international agreement to limit carbon emissions is likely and they are trying to delay it as long as possible.

That means using Saudi wealth and power to influence poorer, weaker nations in the G-77 plus China — a group of developing countries that wants money from developed countries to help them curb emissions.

"Saudi Arabia is one of the richest countries in the world. ... It's quite ridiculous that it sits within the G-77. So they're hardly at the top of anyone's list for financial assistance," Mehra says.

Now that China and India have pledged to curb their emissions, Mehra says the Saudis will have less influence in the G-77, which means less influence overall.

In the end, Saudi Arabia is likely to cooperate at Copenhagen, says Mari Luomi, a researcher at a Finnish government think tank who wrote a recent paper on Saudi Arabia's role in climate change negotiations.

If Saudi Arabia wants help diversifying its economy and exploring new technology such as carbon capture and storage, Copenhagen is the place to get it, Luomi says.

"Saudi Arabia will not stay outside alone, if a treaty is agreed upon, because then its interests will be even less served than they are now," Luomi says.