Accessibility links
Online Gay Marriage License Seen As Game-Changer Two researchers are urging states that have approved same-sex marriage to offer marriage licenses online. The marriages are currently legal in only four states, and the move could ease a bottleneck for out-of-state applicants. But critics say those states deserve the revenue from actual — not virtual — wedding trips.

Same-sex marriage is legal in just four U.S. states — New Hampshire will become the fifth on Jan. 1 — a situation that forces gay couples everywhere else to travel to places like Vermont and Iowa to be wed.

Two Michigan State University professors think there's a better way. They say states that offer same-sex marriage should allow couples anywhere in the country to obtain a marriage license online. But skeptics of this plan abound.

On a Saturday afternoon in 2004, Chris Swope and his partner, Brad Rakowski, exchanged vows in a Lansing, Mich., church before their family and friends.

Two days later, the couple had a second, quieter ceremony in Windsor, Ontario. That's where they signed the papers that bestowed on them the Canadian province's legal blessing.

And that poses a dilemma, Swope says.

"You know, it kind of throws us up in the air about which is our real anniversary," he said. "The one that was more meaningful and heartfelt but has zero legal recognition, or the one that's legally recognized."

Swope's home state of Michigan is one of 29 that impose constitutional restrictions on marriage.

"There is no geographic monopoly that states have over marriage," he said. 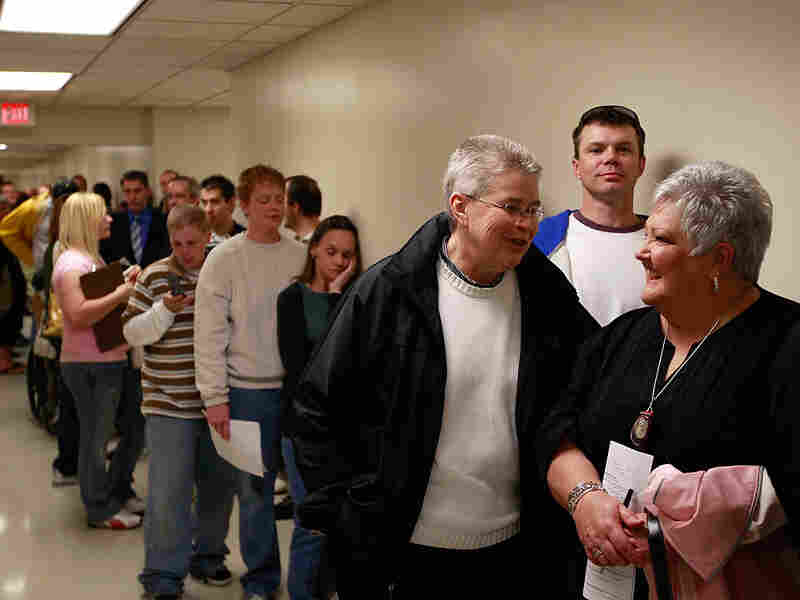 Gay couples wait in line to request a marriage license in Des Moines, Iowa, on April 27, 2009, the first day gay couples were allowed to marry in the state. Scott Olson/Getty Images hide caption 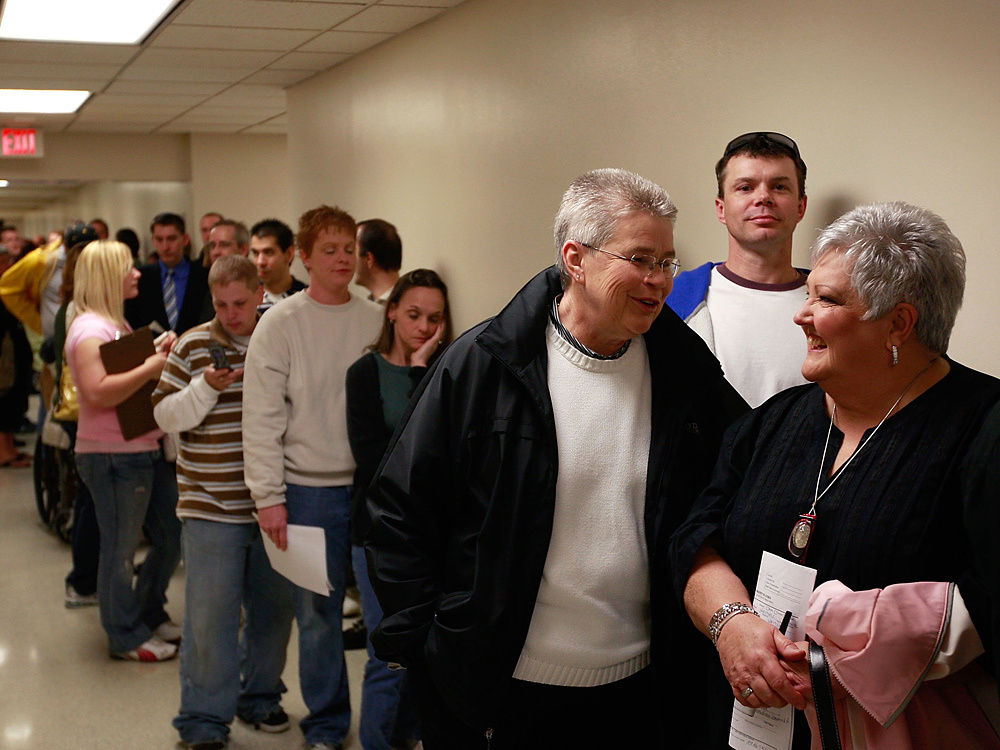 Gay couples wait in line to request a marriage license in Des Moines, Iowa, on April 27, 2009, the first day gay couples were allowed to marry in the state.

Candeub and fellow researcher Mae Kuykendall are law professors at Michigan State University. They say marriage laws need to be more experimental, in ways that meet the needs of couples and the state.

"What we're arguing for is that states should formalize in their laws what they've always been doing in smaller degrees in specific areas, which is, allow people outside their states to use their laws," Candeub said.

With an "e-marriage," Candeub believes couples anywhere could go online and download their license from a state where same-sex marriage is legal. Then, they could still have their hometown ceremony with family and friends, the kiss and the cake.

Candeub says the proposal also has value for heterosexual couples, especially those deployed in the military. He argues that e-marriage could better facilitate long-distance weddings.

Still, the concept fails to change the reality that the vast majority of states refuse to recognize same-sex marriage. And online marriage could pose an economic threat to states where it is legal.

In Iowa, for instance, a 2008 UCLA study predicted that same-sex marriage could generate $160 million in new revenue there in just three years.

The state approved same-sex marriage in April; by June, Christopher Diebel had founded MyIowaGayWedding.com. He questions why any Iowa politician would risk undercutting a growing segment of the state's economy.

"Those of us that are involved in that industry are certainly going to want to protect our investments and the business that comes to our state," Diebel said.

"And frankly, we would all believe that our state deserves to have that income brought into it for being at the forefront of this fight and leading the way."

A weaker bottom line may be an even bigger issue for same-sex marriage-oriented companies in the four New England states that depend even more heavily on tourism than Iowa does.

Candeub and Kuykendall are still tweaking their legal proposal. But they say the idea is gaining momentum. And they say they're willing to advise any legislator looking to extract their state from the culture wars of same-sex marriage and the politics of geography.