Accessibility links
World's Largest Particle Collider Back In Action The Large Hadron Collider was supposed to start smashing particles last fall and was expected to lead to huge scientific discoveries about the universe. Instead, the collider broke down just days after it first started. Scientists have been repairing it for a year, and now it’s ready to go again. 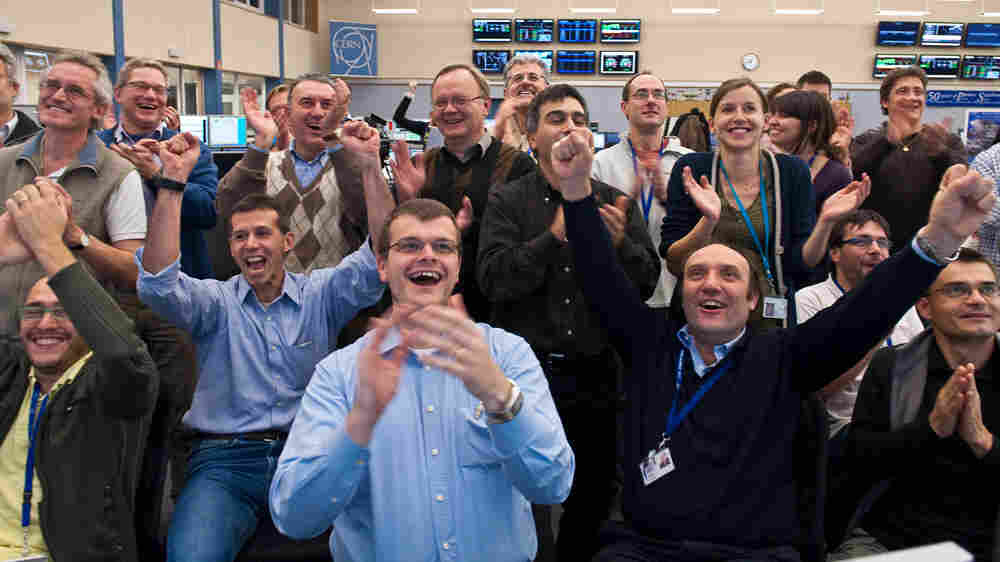 Physicists at CERN labs celebrated on Nov. 30 when the LHC was officially repaired. CERN hide caption 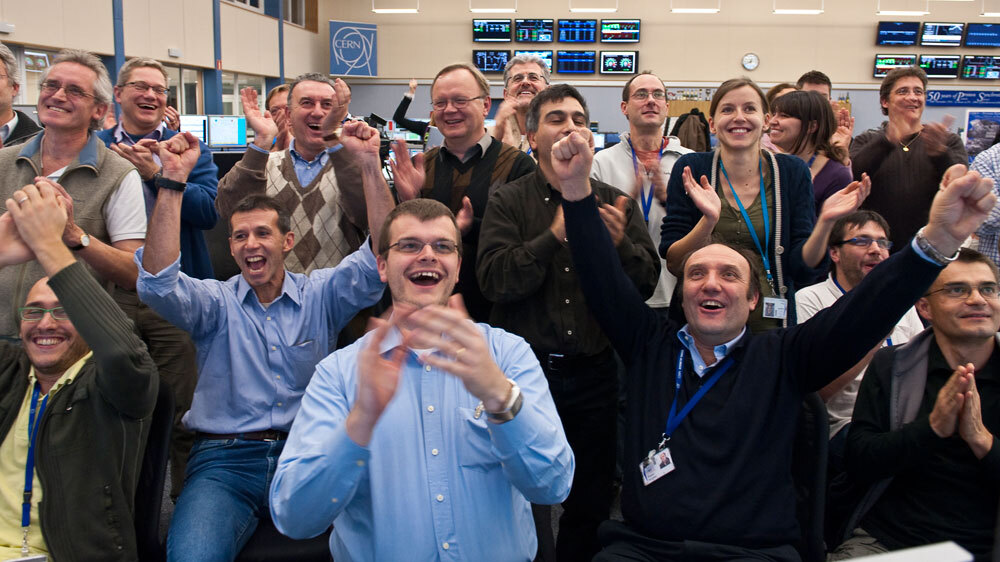 Physicists at CERN labs celebrated on Nov. 30 when the LHC was officially repaired.

The world's largest particle collider is back in business. The Large Hadron Collider broke down last fall. It has taken a year to repair, but this month it began smashing again at record energies. Scientists at CERN, Europe's particle physics lab, are eagerly preparing for a new era in the field.

It's the middle of the night in a room that looks like mission control. There are huge flat screen monitors lining the walls, and about a dozen people are watching those monitors carefully. But instead of looking up, this mission control is looking down. About 300 feet below is a detector the size of a five-story building.

The detector is called the Compact Muon Solenoid. It's one of four "experiments" at the Large Hadron Collider, or LHC. The LHC is the world's highest-energy particle collider. It accelerates protons around a 16-mile underground racetrack, and then smashes them together. The detector's job is to record the subatomic debris from the collisions so that researchers can piece together what happens when the protons smash into one another. At the moment, the LHC is running 24 hours a day, seven days a week, and that means Niki Saoulidou, who is running the night shift, won't be going to bed tonight.

Saoulidou says the nights are long and it gets really hard to stay awake between 4 and 8 a.m. "But I don't mind; I enjoy doing the shift because it brings you close to the real thing." 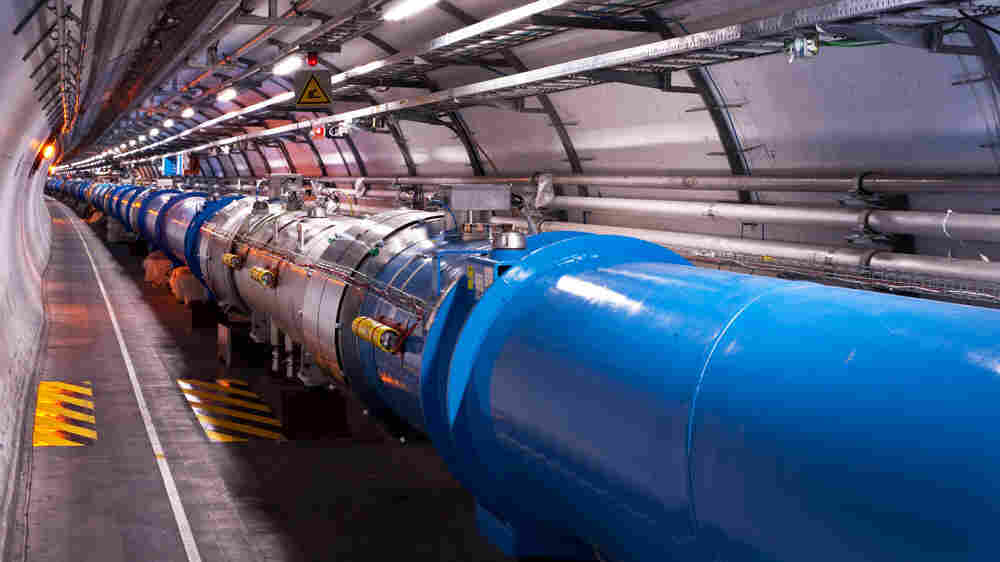 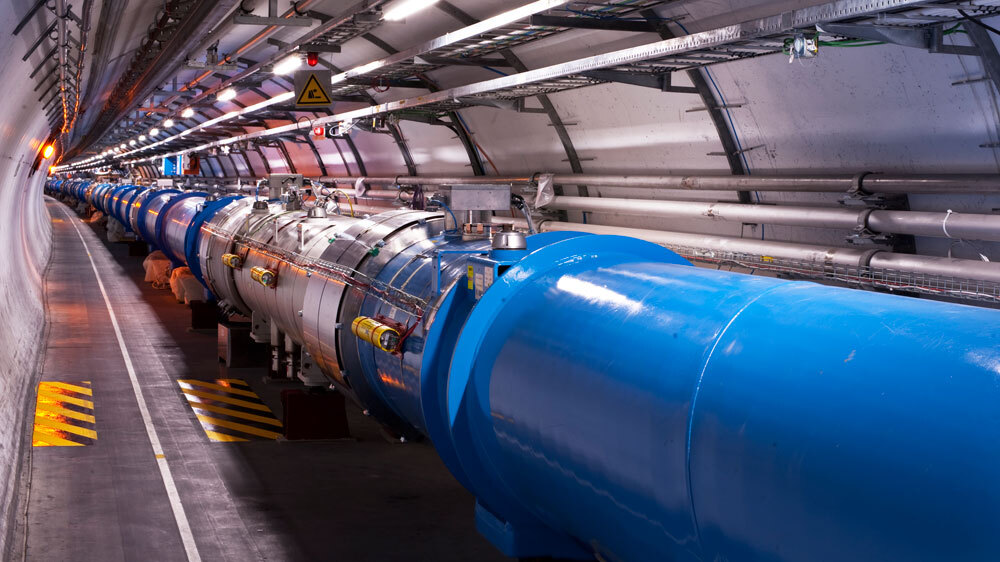 The Edge Of Discovery

The "real thing," in this case, is the chance to find something new. For decades, physicists have had the same view of the universe. They call it the Standard Model, and it's just what the name suggests: sturdy, dependable, but a little boring. Scientists want a change, and if their calculations are right, the energy released by the LHC's collisions should detect something new. That something might be a particle that helps give everything mass. Or maybe dark matter, which makes up much of the universe but hasn't ever been directly detected. Some people even think that the LHC will discover extra dimensions of space. The truth is that nobody knows.

John Ellis, a theorist at CERN, says whatever is revealed will be very exciting. "It'll be a little bit like watching somebody appear out of the fog. You're walking along through the fog, and then somebody comes out of the fog and you start picking out various aspects of them. And eventually you come face to face with the new physics. It's going to be very exciting." 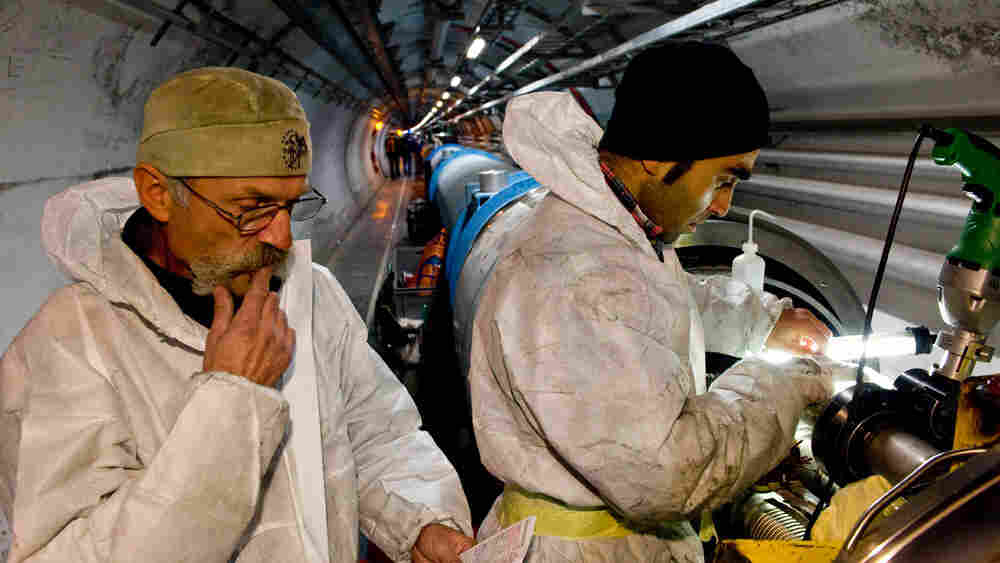 Back in Sept. 2008 an accident caused the LHC magnets to be damaged, leading to a year of repairs. CERN hide caption 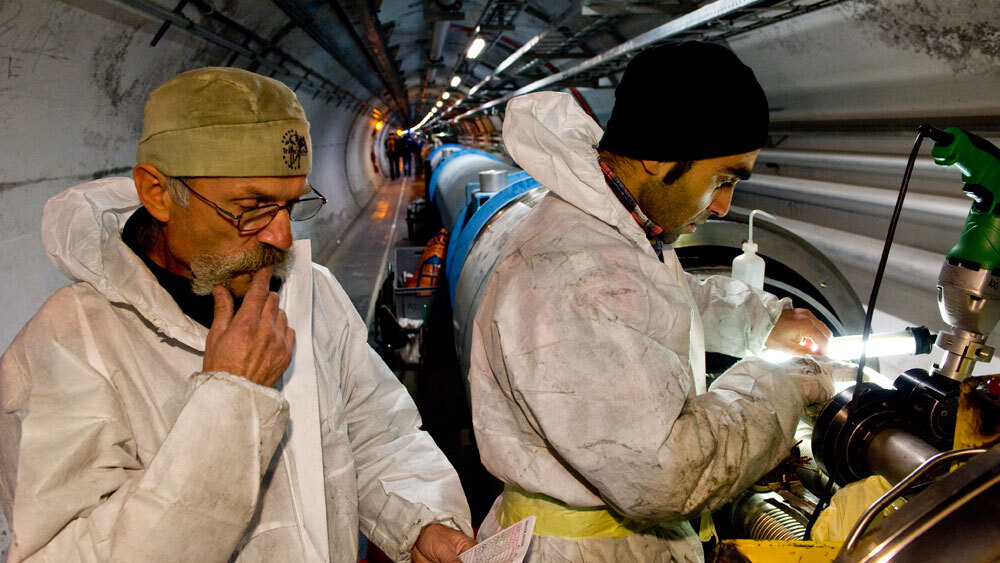 Back in Sept. 2008 an accident caused the LHC magnets to be damaged, leading to a year of repairs.

Last September, scientists were ready to go. But just days after starting, the LHC had a major accident. A single connection, one of tens of thousands inside the collider, burned out during testing. The burnout caused massive damage that has taken over a year to fix.

"The mood at CERN has been a bit of a roller coaster over the last year, year and a half. There was obviously a tremendous amount of anticipation and excitement ahead of the start-up. And then of course there was a big depression a few days later when there was this big electrical fault," says Ellis. But lately, a different emotion has set in: "I think the appropriate phrase is 'grim determination' to get it right this time,' " he says.

But getting it right isn't easy. The zipping protons are suspended by thousands of superconducting magnets, which must be kept freezing cold with tons of liquid helium. It's big, but it also needs to be precise: Everything needs to be timed to within a few trillionths of a second, or the particles won't collide. On top of it all, the LHC was built from scratch, and that makes it a little quirky, says Mike Lamont, who helps keep the machine running.

Lamont says lots of times subsystems end up with personalities that are a product of their creators but the LHC has a very particular trait: "It's kind of a crankiness, I guess, if you can call that a personality trait," he says. 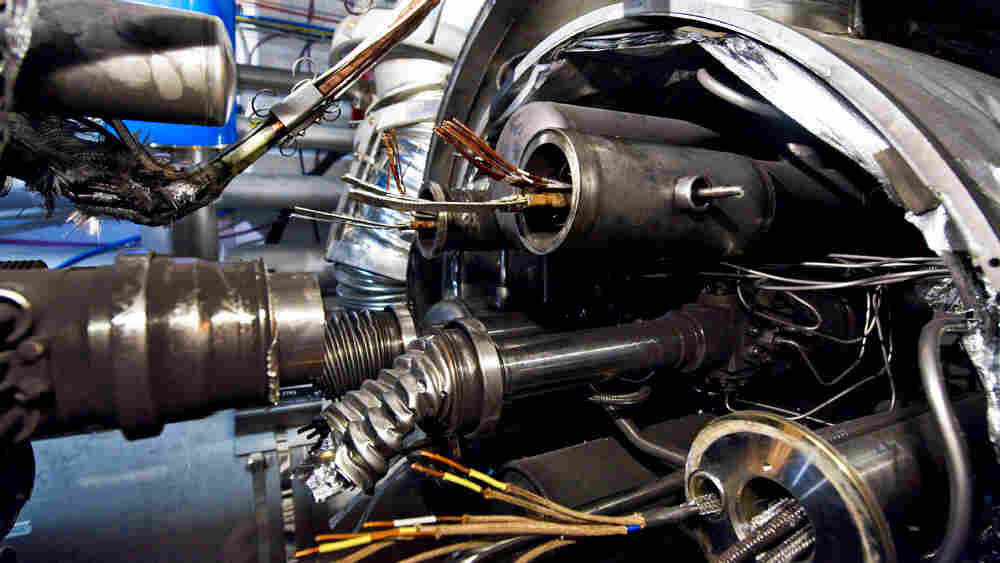 The damaged pipes (center) and burned wiring (upper left) of the Large Hadron Collider, caused by the accident in Sept. 2008. The LHC has undergone a year of repairs since then to get it back up and running. CERN hide caption 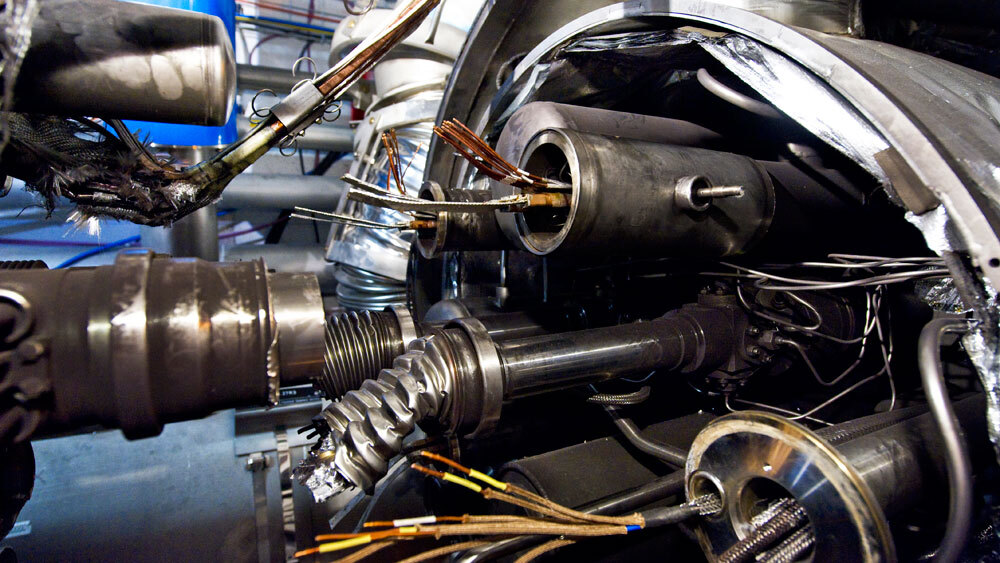 The damaged pipes (center) and burned wiring (upper left) of the Large Hadron Collider, caused by the accident in Sept. 2008. The LHC has undergone a year of repairs since then to get it back up and running.

The machine may be cranky, but since it started working, the researchers here have really cheered up.

Literally thousands of scientists from all over the world are visiting CERN, including Jim Strait. He normally works at Fermilab, America's main high-energy physics laboratory in Illinois.

Strait explains the difference between his lab and here at CERN: "CERN really is for this stuff, the biggest, most cutting-edge place in the world. Fermilab where I work is No. 2. And at the moment just surveying the cafeteria here it seems like it's a long way from 1 to 2."

To make this large-scale research happen takes people from all over the planet. Much of their time has been spent in their own laboratories working on a tiny component or a piece of software. But now that the LHC is starting up, they all get to come together at CERN, and it makes for quite the scientific spectacle.

"It's this place that's completely mobbed with geeks who are surrounded by other geeks and therefore in geek heaven, doing exactly what they want to do. And the exciting thing is that we're going to learn new things about how the universe works, which is what us geeks like to do," explains Strait.

The mood at CERN is electric, and that's not just because the collider consumes as much electricity as the whole of Geneva.

"Everybody's so jazzed that the machine's actually working," says Zach Marshall, a graduate student on a detector called Atlas. "But we're all just waiting with bated breath, because it's been so close so many times," he says.

If nothing else goes wrong, the LHC will begin its colliding in earnest early next year.